A magazine for the local Baptist church. SAN ANTONIO, Texas (BP) -- God still is calling His people to evangelism, and veteran evangelist Sammy Tippit has added identifying and encouraging new evangelists at the same time he continues proclaiming as well as training and equipping those who are drawn to God’s love through Sammy Tippit Ministries’ worldwide evangelistic outreaches.

Sandy Wisdom-Martin, who has served since 2016 as executive director of national Woman’s Missionary Union, recently marked the milestone of 11,111 days involved in vocational ministry. She said her primary ministry goal is “to live surrendered wholeheartedly to the will of God.” (WMU photo by Pam Henderson) NASHVILLE (BP) – When messengers see more ethnic diversity on committees at this year’s SBC annual meeting, they shouldn’t be surprised. As a report by the convention’s Executive Committee puts it, such diversity long has been “the expressed desire of the Southern Baptist Convention.” 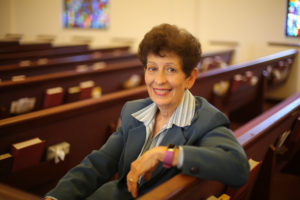 From Cuba to US: President of Florida WMU Reflects on Life Lessons Amid Upheaval We are true and loyal helpers to our denomination, committed to making Christ known among the nations.

Because We Love You

“When we get old, God looks after us and takes care of us and not just in the big things. It’s also in the small ways that we don’t always realize.”

My Prayer for the SBC

Last year, after accepting the nomination for presidency of the SBC, I laid out my prayers for our Convention. One year in, as we assemble for our annual meeting in Birmingham, I am just as excited to see God moving in every one of these areas.

By Karen L. Willoughby, posted June 8, 2019 in Cooperating for the Gospel, SBC Life

Cascading goals at Shades Mountain Baptist Church in greater Birmingham have coalesced into what has become a redemptive river of Gospel missions.

Creating a Culture of Unity and Love

There is nothing more powerful than the words of Jesus Christ: LOVE ONE ANOTHER.

Sixth Avenue Baptist Church: A Light to the Community, Nation, and World

By Karen L. Willoughby, posted June 8, 2019 in Cooperating for the Gospel, SBC Life

Sixth Avenue Baptist Church, the largest black church in Birmingham, is known for its historic and contemporary influence in the greater Birmingham area.

I am pleased to announce this outstanding group of Southern Baptists.

At the same time Birmingham Metro Baptist Association has been developing racial inclusion, it’s been expanding the ministries of the 126 churches under its fellowship umbrella.

‘Who’s Your One?’ Emphasis Launched

The North American Mission Board launched the Who’s Your One? evangelism initiative on February 26 as part of an effort to encourage Southern Baptists to engage people with Gospel conversations throughout the year.

The EC voted to recommend the addition of Children’s Ministry Day to the SBC calendar, requested by ten-year-old Zak McCullar.