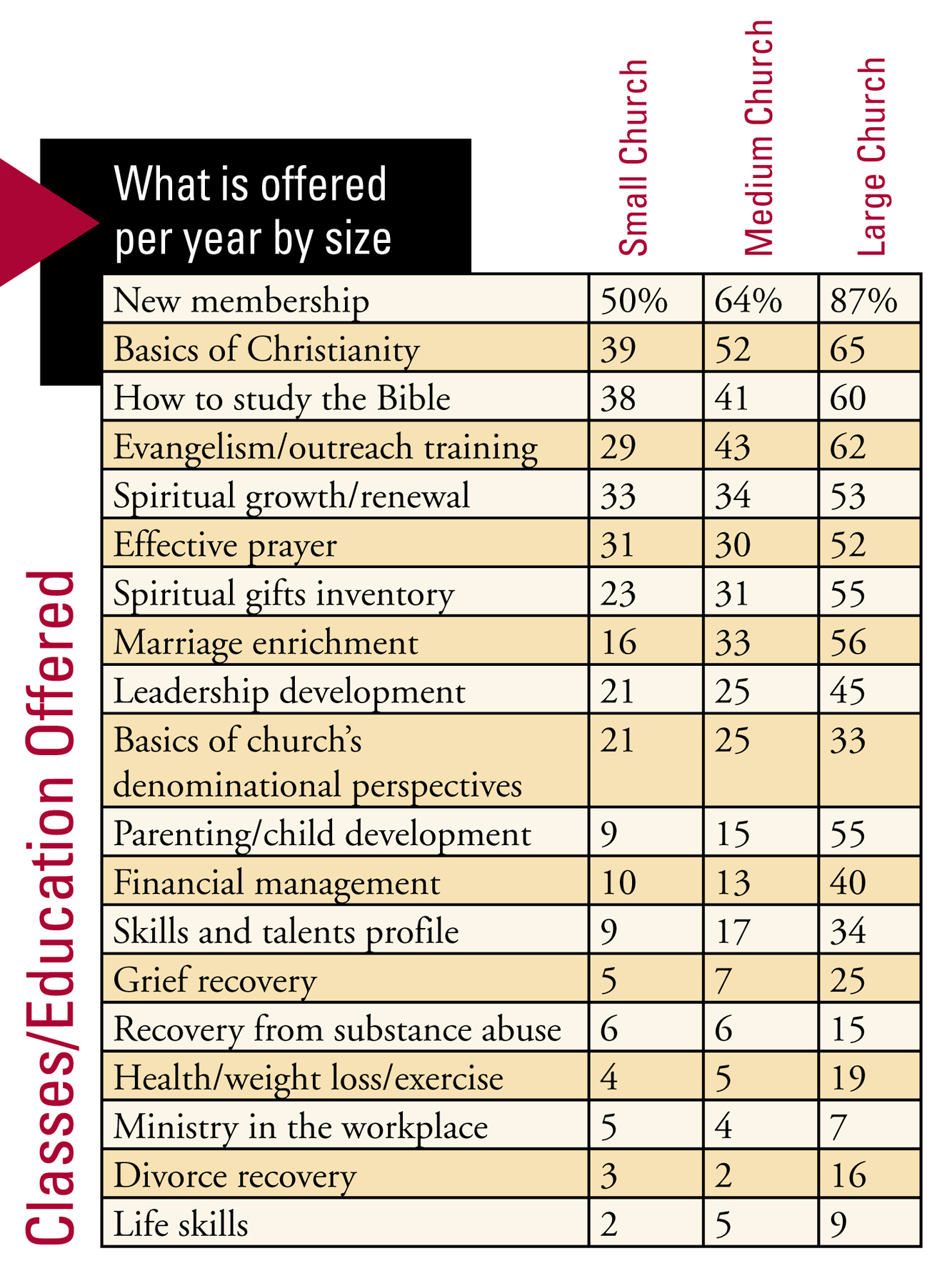 NASHVILLE, Tenn. (BP)–A new members class is the only type of educational offering provided in a majority of all Protestant churches, according to a survey published in a LifeWay Christian Resources magazine for pastors.

The study, in the November/December 2005 issue of Facts & Trends, was conducted among a representative sample of 872 Protestant church ministers nationwide to explore the types of classes or education that churches offer (not including sermon topics on the subject).

Ron Sellers, president of Ellison Research in Phoenix, noted, “What we measured in this study [for LifeWay] was the issues to which churches have a regular, ongoing commitment -– offering them at least once a year.”

A new members class was offered at 60 percent of the respondents’ churches at least once a year, followed by classes on the basics of Christianity (47 percent); how to study the Bible (43 percent); evangelism or outreach training (39 percent); spiritual growth or spiritual renewal (37 percent); and effective prayer (35 percent).

Types of education regularly offered by relatively few churches include financial management (17 percent); a skills and talents profile (15 percent); grief recovery (9 percent); substance abuse recovery (8 percent); health, weight loss or exercise (7 percent); ministry in the workplace (5 percent); divorce recovery (5 percent); and life skills (4 percent). Only 4 percent of all ministers named any other type of class offered by their church at least once a year.

Significant differences in what churches offer were noted according to their size and denomination. For almost every type of class, for example, larger churches are significantly more likely to offer that type of education than smaller or midsize churches. Only ministry in the workplace shows no difference by church size. Sometimes the differences are relatively small (such as the basics of the church’s denominational perspective, which is offered annually by 33 percent of large, 25 percent of midsize and 21 percent of small churches); sometimes the differences are dramatic (such as marriage enrichment, offered by 56 percent of large, 33 percent of midsize and only 16 percent of small churches).

Among various denominations, the sample size was large enough to allow analysis of six distinct groups: Lutheran, Methodist, Presbyterian, Southern Baptist, other Baptist and Pentecostal/charismatic churches (although many other denominations are represented in the total sample).

While Southern Baptist churches are somewhat less likely than average to offer regular classes in the basics of Christianity, the basics of their denominational beliefs and how to study the Bible, they are more likely to offer education on marriage enrichment and evangelism or outreach training. As a group, Baptist denominations other than the Southern Baptist Convention are fairly average in what they offer their congregations.

Presbyterians are less likely than average to educate people on marriage enrichment, financial management and evangelism or outreach training and more likely to have classes for new members and on denominational perspectives.

The study did not include topics that are the focus of a sermon series or that are offered on an irregular basis, Sellers said.

Sellers noted that the study helps demonstrate what churches really emphasize. “Churches are focusing on the basics: what is Christianity, what is necessary for church membership, how to study the Bible. When they go deeper, they tend to focus on basic Christian practices: prayer, evangelism and spiritual growth. These are all critical, but churches also need to recognize why many people come through their doors in the first place. Often they’re seeking real-life answers to marriage problems, issues at work, raising children or financial worries.

“Many of these ‘daily life’ issues are not regularly dealt with in churches,” Sellers said. “Even in large congregations, a majority is not offering regular education on financial management, divorce recovery, leadership, workplace ministry or health issues, and just over half consistently offer anything on parenting, spiritual gifts or marriage. The more a church can move the congregation’s involvement from a ‘religious’ experience to living out their faith on a daily basis, the more that church can effect a real change in people’s lives and in their communities.”
–30–