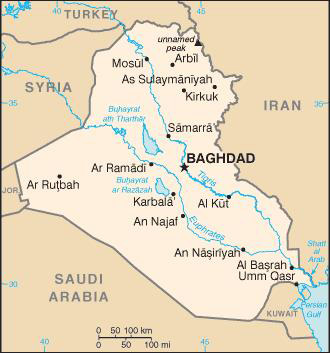 WASHINGTON (BP)–Conditions for religious minorities in Iraq “have deteriorated very considerably” in the last three to four months, the bipartisan U.S. Commission on International Religious Freedom (USCIRF) was told recently.

The panel heard testimony July 25 about the plight of Chaldo-Assyrian Christians and other minorities in the first Washington hearing involving representatives of those communities. The Capitol Hill hearing demonstrated the situation for such religious minorities has not improved in the time since the American-led coalition deposed Saddam Hussein in 2003 and began seeking to rebuild the government.

The witnesses’ testimony also seemed to affirm the USCIRF decision in May to place Iraq on a “watch list” because of the “alarming and deteriorating situation for freedom of religion and belief,” as described by the commission. The commission removed Iraq from its list of most severe violators of religious freedom after Hussein’s regime was toppled.

Andrew White, vicar of St. George’s Anglican Church in Baghdad, told the commission his parishioners told him recently, “We’ve never had it so bad.”

Members of religious minorities have been kidnapped, tortured and killed, he said. When White visited with his Iraqi congregation two weeks before, he learned 36 of his parishioners had been kidnapped in the previous week, he testified.

Witnesses provided the following estimates, some based on United Nations reports, on the extent of the persecution of Christians:

— As much as 50 percent of the Iraqi Christian population has fled the country.

— About 40 percent of the 2.2 million refugees from Iraq are Chaldo-Assyrian Christians.

— More than 30 churches have been destroyed.

The persecution also affects such communities as the Sabean Mandaeans, who follow the teachings of John the Baptist; Yazidis, whose rituals include worship of a fallen angel who repented; and Jews. More than 80 percent of Mandaeans have left Iraq since 2003.

White, who is from Great Britain, said he supported the war and the overthrow of Hussein, but he added, “And yet it causes me great sorrow to see that the international community, including my own nation and yours, has not really done anything to help these people. The fact is, they are suffering because of us.

“The situation is more than desperate. [The American-led coalition] has failed the Christians. [It has] done nothing to support [them]. No government has understood their need.”

The United States still “can do a huge amount,” White said in response to a question from USCIRF member Richard Land, president of the Southern Baptist Ethics & Religious Liberty Commission.

A massive withdrawal of the U.S. military would result in “more blood flowing in the streets than we have already,” White said. “[The military] can’t just leave. If [troops] pull out, I dread to think of what will happen.”

Iraqi Christians need security, basic provisions — such as food and water — and engagement with other religious groups, White said.

Iraq has been plagued by violence between Sunni and Shi’a Muslims, as well as attacks on non-Muslims. The Shi’a-dominated government has been guilty of failing to prevent attacks on religious minorities while also backing militias who have committed such crimes, the USCIRF has reported.

The Iraqi government “probably” is playing a part in the “sectarian violence,” White told the panel. “The government is the most corrupt government I’ve ever met.” He trusts the prime minister, Nouri al-Maliki, but not most of the other ministers, White said.

Pascale Warda, a Chaldo-Assyrian Christian and Iraqi minister for migration and displacement in 2004-05, told the commissioners through an interpreter Christians are “directly targeted” because they do not possess militias.

“They are identified as American allies and infidels, for the simple reason that they share a common faith with those in the western world,” she said. “The security situation is worsened for lack of any protection offered by the Iraqi local government…. It is the moral obligation of the Iraqi and American governments to help them achieve these objectives and to ensure the protection of these vulnerable ancient communities of Iraq.”

Michael Youash of the Iraq Sustainable Democracy Project told the panel the U.S. Congress can help by providing funds to assist Christians who have relocated to the northern part of the country, the Nineveh Plain and other areas.

The ERLC’s Land commended the witnesses, telling Baptist Press, “I applaud the courage of all of those who testified and the courage of those that they testified in behalf of in continuing to bear witness for their faith in the midst of a terrible and tragic situation. Hopefully, their testimony will help encourage our government to do more to ensure that the rights of all religious minorities will be protected in Iraq.”

Other witnesses included two members of the House of Representatives: Reps. Anna Eshoo, D.-Calif., the only Assyrian member of Congress, and Christopher Shays, R.-Conn.

The USCIRF advises the White House and Congress on religious liberty conditions overseas. The president selects three members of the panel, while congressional leaders name the other six. The State Department’s ambassador at large for international religious freedom serves as a non-voting member of the panel.
–30–