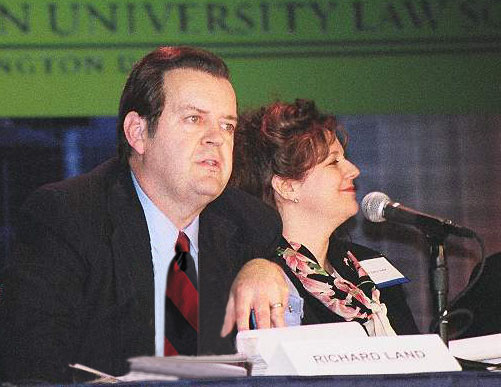 WASHINGTON (BP)–Southern Baptist religious liberty specialist Richard Land warned Afghanistan public officials during a recent forum that assistance from the United States could be threatened if freedom of conscience is not protected in the country’s new constitution.

Land, president of the Ethics & Religious Liberty Commission, offered his assessment at a forum on the reconstruction of the central Asian country following the removal of the Taliban regime by U.S.-led forces a year ago. The U.S. Commission on International Religious Freedom sponsored the day-long forum, which included U.S. government officials, specialists on Islam and human rights, and Afghan authorities. Land is a USCIRF commissioner.

When Musa Maroofi, a member of the Afghan constitutional drafting committee, said “freedom of religion is relative in countries like Afghanistan,” some USCIRF members voiced displeasure.

USCIRF chairwoman Felice Gaer said she was “shocked by the discussion.” Land went a step further.

“We are not out to make little cookie-cutter Americas,” Land said but added there could be consequences if Afghanistan does not permit the “freedom of conscience to change [a person’s] religion.”

“If that is not recognized in the Afghan constitution, then the amount of support you heard promised from the United States government will be hard to maintain, because the American people will not have it,” he said. Americans “will not subsidize” religious suppression, he said.

After being questioned about his remarks during a break, Land clarified his comments.

“I can assure you I am not speaking for the administration,” he said. “That was more of a prediction than a suggestion.”

It will be difficult to sustain a long-term commitment to Afghanistan without protections for freedom of conscience, “because members of Congress will be under such duress from their constituents,” Land said.

Peter Tomsen, a former special envoy to the Afghan resistance, later said he was glad Land clarified his remarks, calling them “kind of inflammatory.” The U.S. should reevaluate its aid to non-Islamic states such as Armenia and Nepal, which have non-proselytizing laws, if it does so with Afghanistan, Tomsen said.

A more moderate group could not be found than the one now in control of the Afghan government, Tomsen said.

Zalmay Khalilzad, President Bush’s special envoy to Afghanistan, had assured the Afghans earlier in the day the U.S. “commitment to the future of Afghanistan is unshakeable.”

Andrew Natsios, administrator of the U.S. Agency for International Development, cited the aid provided by the American government in food, agriculture, medicine, rebuilt roads and a reconstructed teacher’s college. He said the U.S. has “no right or intent to impose America on Afghanistan.”

Though Maroofi said the new Afghan constitution “will be 100 times more democratic” than any previous version, he acknowledged there are no absolute rights in a Muslim state that are not fundamentals of Islam. Turkey is the only Muslim state with separation of church and state, he said.

“There are no liberal Islamic regimes,” Maroofi said. “You are either a Muslim state or you are not.”

Abdul Rahim Karimi, Afghanistan’s minister of Justice, told the forum through a translator “there will be a democratic society” in his country.

Land and the other commissioners have not said Afghanistan should bar an Islamic government in a country that is 99 percent Muslim, but they have called for freedom for members of other religious groups. The USCIRF, which held the forum at George Washington University, has expressed concerns about the status of religious liberty and human rights in the country, even after the overthrow of the repressive Taliban regime. Its harsh imposition of Islamic law earned it a spot among the State Department’s countries of particular concern, which is reserved for only the worst abusers of religious freedom in the world.

The USCIRF has recommended Bush name a special envoy to promote human rights protection from the U.S. embassy in Kabul. The USCIRF has called for the promotion of a commitment to the “rule of law,” as well as religious liberty and other human rights, in Afghanistan’s constitution, laws and judicial system.

The commission has expressed concerns at the institution of two religious police organizations, comments from Afghanistan’s chief justice supporting execution of non-Muslims, appointment to the judicial commission of a majority in support of a strict interpretation of Islamic law and an increase in the power of warlords.

It also has urged the U.S. to lead other countries in supporting the expansion of the international security forces beyond Kabul in order to protect reconstruction of the Afghan government and the human rights of its citizens.

Americans and Afghans who spoke at the forum pointed to security, especially against the interference of outside forces, as critical to achieving a successful reconstruction of the government.

The USCIRF consists of nine members appointed by the president and congressional leaders. The panel, which was established by a 1998 law, is responsible for researching religious liberty issues in foreign countries and making policy recommendations to the White House and Congress. Bush named Land to the panel in 2001.
–30–
(BP) photo posted in the BP Photo Library at http://www.bpnews.net. Photo title: LAND AT FORUM.