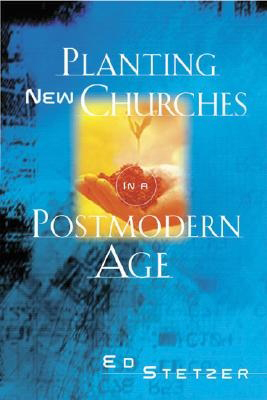 ALPHARETTA, Ga. (BP)–A comprehensive new book on church planting provides not only the nuts and bolts of starting new churches in a variety of settings, but also a basic foundation for why new churches should be central to any evangelism plan.

The book, “Planting New Churches in a Postmodern Age,” was written by Ed Stetzer, a North American Mission Board church planting specialist. Released this summer through Broadman & Holman, the publishing arm of LifeWay Christian Resources of the Southern Baptist Convention, it is already in its second printing and exceeding sales projections. Several denominations and seminaries have adopted the book as required texts for their church planters, and the North American Mission Board provides copies to individuals who are considering becoming a church planter.

“The book is really a book about how to plant a church, and in the process it analyzes certain contexts in which you would plant a church,” Stetzer said. “We all live in a postmodern age, and so it’s about planting baby boomer churches, African American churches, ethnic churches — and churches that reach postmoderns.”

Stetzer draws on his own experience in starting several successful churches, formal and informal research of church planters, as well as a Ph.D. in missiology.

“What I try to bring to the book is the nuts and bolts of church planting, but also a missiological eye on analyzing church culture and developing strategies to reach those cultures,” he said.

One strong theme is the importance of building “missional” churches, congregations organized with the intent of reaching those in the culture surrounding them — not just other people like themselves. The alternative becomes like many of the Southern Baptist congregations planted in the North and West during the 1950s and ’60s, which mostly attracted transplanted Southern Baptists, Stetzer said.

“It’s easier to be a mission-minded church than a missional church because a missional church has to engage the context in which it lives, the water in which its people swim,” he said. “That culture has been radically transformed in the last three decades … and yet most of our churches look the same as they did, with minor adjustments. We can’t just willy-nilly adopt the values and norms of the culture, but at the same we can’t reach the people of the new millennium with the methods the ’50s.”

As suggested by the title, the book also deals with a pervasive postmodern mindset that all new churches must address in some form, Stetzer said. “The answer to planting a church in today’s world is not returning to old methods, it is returning to biblical teaching. We just present what Jude called ‘the faith once delivered’ in a new cultural context. It’s the same thing missionaries have been doing in the rest of the world. Now, we live in a mission field and we need to present solid biblical truth in this changing culture.”

Stetzer explores the biblical foundations and cultural issues in detail, but he also covers such step-by-step details as developing a core group, starting small groups and selecting locations for worship space.

“I wrote this book because it pained me to see so many church planters get out on the field and not be able to connect to the culture and to plant a biblically faithful church,” he said. “The book is certainly not the answer to all those problems, but I do hope that it will help.”