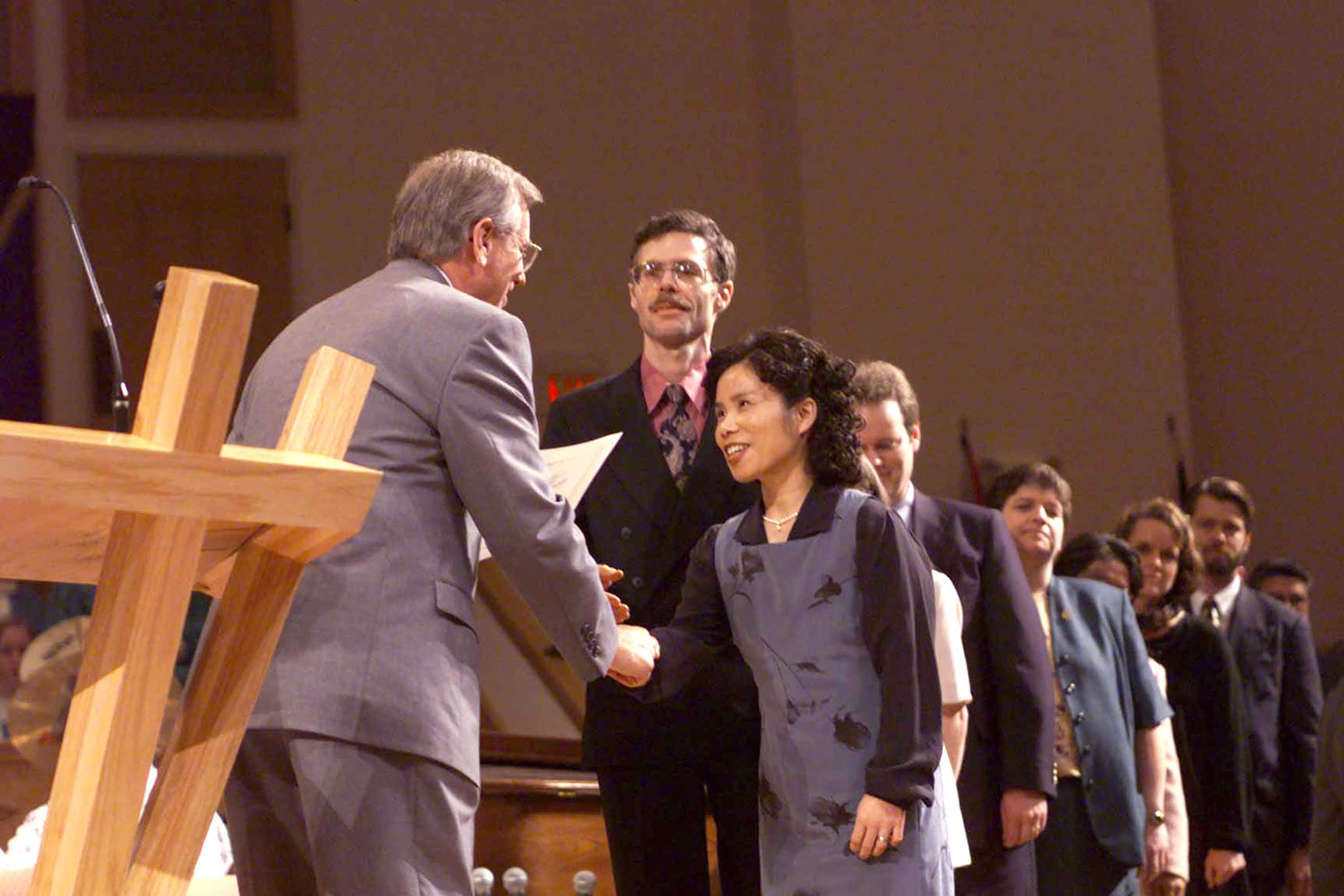 AUBURN, Ala. (BP)–Southern Baptists’ 36 newest international missionaries reflect the growing influx of ethnics, older individuals and people of other diverse backgrounds into the Southern Baptist missionary force, which itself is increasing at an accelerating pace.

The group appointed Jan. 10 at Lakeview Baptist Church in Auburn, Ala., was more ethnically diverse than usual, including six of Asian background, noted Jim Riddell, who lead the board’s missionary mobilization team.

Two of the new missionaries were themselves products of missionary work overseas.

“During my college days in Seoul, Korea, Dwayne Petty, a journeyman from the IMB, led me to Christ,” said appointee YoungOak Farmer. “I then became involved in the student ministry with Dwayne and my pastor. Ever since, God has placed a burden in my heart to share the gospel with people on the mission field.”

She and her husband, Bob Farmer, a forester, will serve in the Philippines.

Another appointee, who along with her husband will serve in an undisclosed area in The Last Frontier, said, “I attended a special missionary school as a teenager in South Korea. One guest missionary from Bangladesh stirred my heart for the lost. I knew then as I know now, God was calling me to minister in another culture.”

Appointee Harris Cook noted that he is in his 50s — once considered too old to become a missionary — and was fulfilling a call God gave him when he was in seminary more than 25 years ago. The lingering illness and eventual death of his first wife prevented his appointment until now. He and his second wife, Jenny, married in 1994 and have been ministering in apartment complexes and mobile home communities for the Bessemer (Ala.) Baptist Association.

The Cooks will coordinate the evangelism efforts for a missionary team focusing on more than 5 million urban poor living in Caracas, Venezuela.

The appointment service was held Monday night, Jan. 10, at Lakeview Baptist Church in Auburn in conjunction with an IMB trustee meeting at nearby Auburn University Hotel and Conference Center. The church’s 2,000-seat auditorium was so packed that folding chairs had to be brought in for the overflow.

In his charge to the new missionaries, IMB President Jerry Rankin reflected on the apostle Paul’s prayer in Col. 1:9-11 and reminded them that even though they know God intimately, missionaries must continually strive to know him even more deeply.

“God has brought you to this point of entrusting you with a missionary call because you have been discipled and have grown in your walk with him,” Rankin said. “But I assure you there is much more to know of God.”

Rankin also reminded the new missionaries their success does not depend on their own abilities and skills but on their reliance upon God.

“God has not chosen you because of your own worthiness,” he said. “One of the reasons God used Paul so powerfully was due to his humility and sense of unworthiness.

“The key to being worthy to be used of God, wherever you go, is fully depending on him, drawing upon his grace and living a life of purity and holiness in your daily walk.

“Walking worthy of the Lord will come from spending time with him in prayer and feeding on his Word,” Rankin said. “It comes from allowing him to fill your life with his Spirit, producing his character, so that your life is such a dynamic witness that it will draw people to you and to Christ.”

Rankin also reminded the new missionaries: “We expect you to fulfill that assignment with integrity and to be known as a person of character and to model a Christian work ethic that is unknown where you go.

“In all the good works you do, never lose sight of the reason you are there, and may these works become a channel through which you bear witness to God’s love and lead people to saving faith in Jesus Christ.”