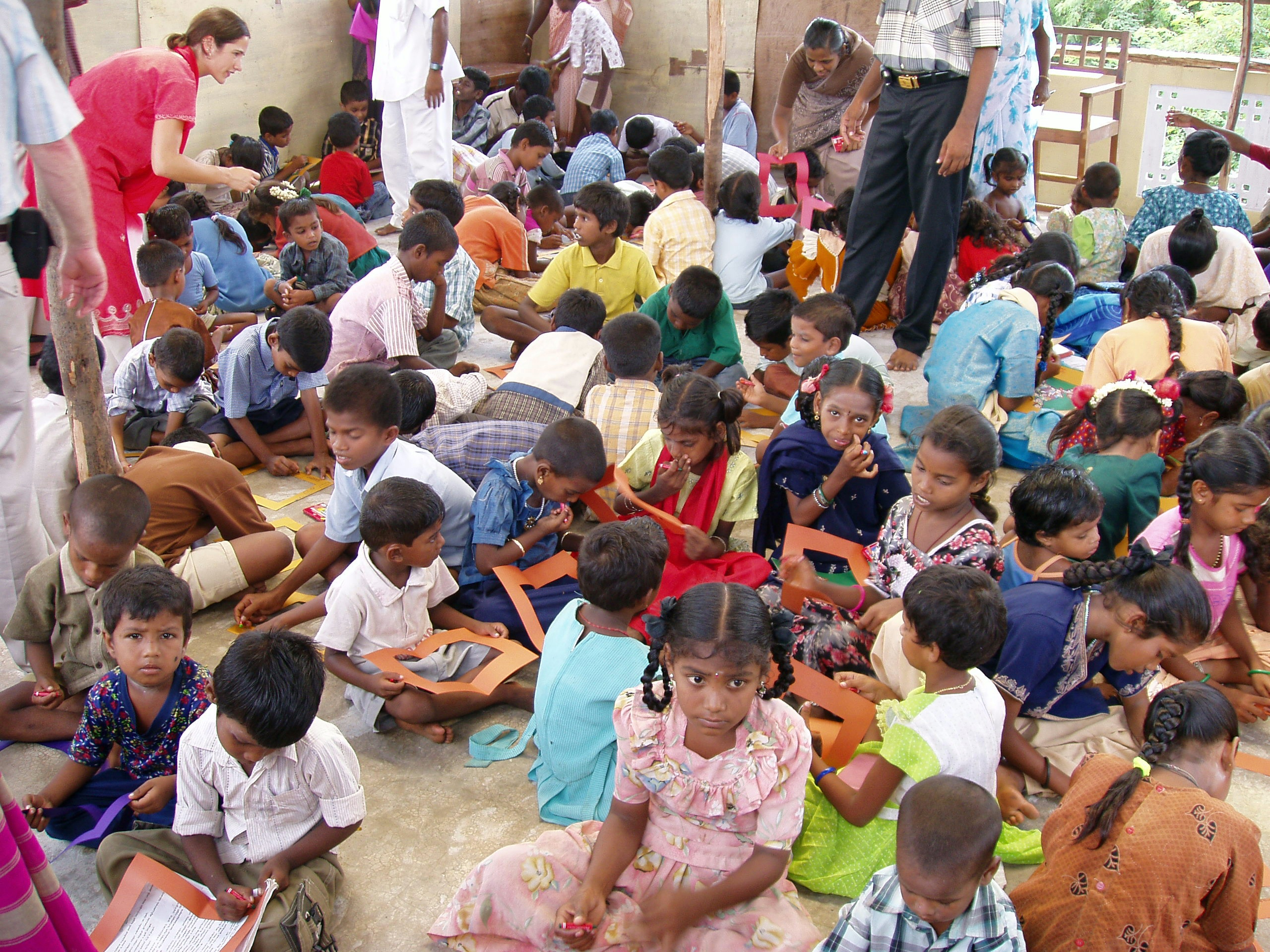 EDITORS’ NOTE: On Dec. 26, 2004, a massive earthquake in the Indian Ocean spawned one of the most destructive tsunamis in recorded history. It swept away thousands of lives and left millions of people homeless. One year later, Southern Baptists continue to aid and share God’s love with survivors in South Asia. In addition to reports in Baptist Press Dec. 22, the following stories report ongoing ministries and needs.

CHENNAI, India (BP)–When Cole Elbridge* stood to accept the village leader’s appreciation, he did so on behalf of Southern Baptists who have given nearly $17 million to help survivors of the tsunami that ripped through southern Asia’s coastlines on Dec. 26, 2004, leaving a quarter of a million people dead and millions homeless.

Elbridge, a Southern Baptist worker, explained how supporters in America had been deeply troubled by the images and were moved to help. Their love for God had moved Southern Baptists to love the tsunami victims, he said, and he shared with the villagers about the true love of God for them in the Gospel message.

“I sat there in awe of how great our God is,” said Jana Eddleman*, another Southern Baptist worker who was at the village. “Here I was, this small insignificant part of His great plan for the nations, waiting and watching to see what He is going to do next.”

No one else had helped this particular village since the tsunami, the village leader told the workers during the December 2005 presentation.

“With such a sense of gratitude and appreciation, the village leader stood up and thanked us on behalf of the entire village for our assistance,” Eddleman said. “Hands shot up all over the area as he asked how many of the families there had been helped. They seemed anxious to get a look at these people who had come from afar and had been willing to help them when they needed it the most.”

A massive earthquake, centered in the Indian Ocean west of the Indonesian island of Sumatra, set in motion the tsunami that sent deadly waves across low-lying areas in South and Southeast Asia — and as far away as Africa.

David Garrison, the Southern Baptist International Mission Board’s regional leader for South Asia, said the coastal areas most impacted by the tsunami “are home to millions of lost souls who have little access to the Gospel of Jesus Christ. Over the past months, these people have seen the love of Christ as never before. Southern Baptist workers have provided emergency food and water, rebuilt homes, purchased fishing nets, helped re-establish businesses and, most importantly, offered Good News of eternal hope in Jesus Christ.”

In South Asia, the tsunami battered coastal areas in Sri Lanka, India and the Maldives, taking a huge toll physically and emotionally on the people. Yet, Southern Baptist personnel report that in the past year God’s healing hand has been evident in each affected region.

In India alone, Elbridge said that about 1,900 people -– mostly Hindus and some Muslims -– have accepted Jesus as their Savior since the tsunami. As a result, about 150 house churches have been started. Some of these new congregations have birthed second-generation churches.

“Already [the advance of the Gospel] is growing and reproducing so quickly that it’s becoming hard for us to keep up with all that God is doing here,” Eddleman said. “But to me, that’s the exciting part. The potential here for the work to keep growing is almost limitless.”

“Our primary guideline was to put people back to work by doing boat repairs, engine repairs, providing nets, purchasing boats and catamarans lost in the tsunami, and later vocational training for those without jobs,” Elbridge said.

Relief workers have faced unique challenges in the wake of the disaster.

With nearly $17 million raised by the generosity of Southern Baptists for the tsunami efforts, Elbridge said, the workers “were limited not by funds but by stewardship, accountability, personnel on the field and ensuring we were meeting real needs of the people.”

As in Sri Lanka, the relationships Southern Baptist volunteers developed
during their initial short stints of service in India helped spark
spiritual interest among people they were helping in practical ways.

“Last summer we were able to conduct at least nine children’s camps, thanks to two American teams that came,” Southern Baptist worker Tanya Chisolm* said. “Many of these villages had never before had a Gospel presentation there. We also had a team of college guys who lead sports camps in numerous villages, showing the ‘JESUS’ film at the close of each camp.”

Chisolm recounted that one village where volunteers conducted a children’s camp had a reputation for being hostile to the Word of God and its messengers.

“But after the tsunami, many secular groups came in to bring relief and didn’t live up to their promises,” she said. “So they came to us. [It was] a 180-degree about-face -– from telling us to stay away to asking us for our help. So as we gave nets and fans to the villagers, we also gave out the Good News.”

Volunteers served primarily in areas where there were no Christian believers or evangelical churches. Teams conducted children’s camps, sports camps and relief work. They integrated personal testimonies, tract distribution, open-air revivals, chronological Bible storying, the “JESUS” film and another Hindi-language evangelistic film to share the Gospel through their outreach.

“We recorded over 60 decisions for Christ through the volunteer teams who came to assist us,” Elbridge said. “Since these were pioneer areas for evangelism, the volunteers were not always well-received when they shared the Gospel, but we were able to determine open and closed areas to the Gospel through their efforts.”

The number of decisions to follow Jesus climbed as Elbridge and a team of Indian pastors with whom he partners began training laypeople and new believers to share the Gospel with others.

Workers are using the “T4T” (Training for Trainers) approach with the new Christians. T4T training begins by encouraging believers to intentionally share their testimonies with others. It takes trainers from evangelism to reproducing themselves in other disciples, which can in turn lead to reproducing house churches –- and ultimately a church-planting movement. As a part of the training, the new Christians go out and practice sharing their faith.

“One person who was saved today had previously gone to a church to ask for prayer for healing on his broken hand,” Elbridge said. “His hand was healed, but no one shared the Gospel with him. Today when our people shared [the Gospel], he immediately accepted Christ. He had only been waiting for someone to tell him how to accept Jesus.”

Another training method the workers have used is called CAMEL, which focuses on reaching Muslims. The tool involves using verses about Jesus in the Koran as a bridge to sharing the Gospel of Jesus as presented in the New Testament.

“In September, we saw those trained in T4T and CAMEL reach 863 people for Christ,” Elbridge said. “As the churches grow and multiply, the walls of God’s Kingdom will begin to extend from one village to the next.”

Of about 500 villages affected by the tsunami in India, Southern Baptist workers have focused on several strategic areas, working in 85 villages across 620 miles of coastline.

Elbridge said that many of the pastors who were helping tsunami-battered villages had once been beaten and thrown out of the same villages that welcomed them after the tsunami.

Yet, the work of meeting both physical and spiritual needs is far from finished.

“The majority of aid donors who poured into India [soon after the tsunami] left just as quickly, within three to five months,” Elbridge said. “So while many tsunami victims admit they had plenty of food, clothing and assistance in the beginning, a year later — when they are still facing shortages of food, water and basic facilities — there are few or no organizations they can turn to for help.

“Those affected by the tsunami are still struggling, wondering if they will be able to have homes again or earn a living to support their families. It is clear that recovery from the tsunami will be measured in years, not months.”

In addition to the existing needs, new flooding in December 2005 compounded the problems. Eddleman said recent flooding has created a new sense of urgency as workers do initial flood relief in some southern Indian villages.

“Even outside my apartment, the once small canal has turned into a raging river,” she said. “The only thing separating us from the flooding at the moment is a wall on the border of the parking lot. The mud huts that lined the canal are in the river as well, with only their roofs visible at this point.”

The spiritual urgency also has not dissipated.

“During a tent revival, we saw 40 people come forward to pray to receive Christ,” Elbridge said. “I heard a couple of weeks later that one of these people who accepted Christ was killed when a bus struck his automobile, killing five people -– another reminder of the urgent need to share the Gospel.”
–30–
*Names changed for security reasons. Goldie Frances is a missionary writer serving in the South Asia region. For more information about volunteering to do relief work in South Asia or to share the Gospel in other ways in the region, e-mail [email protected]