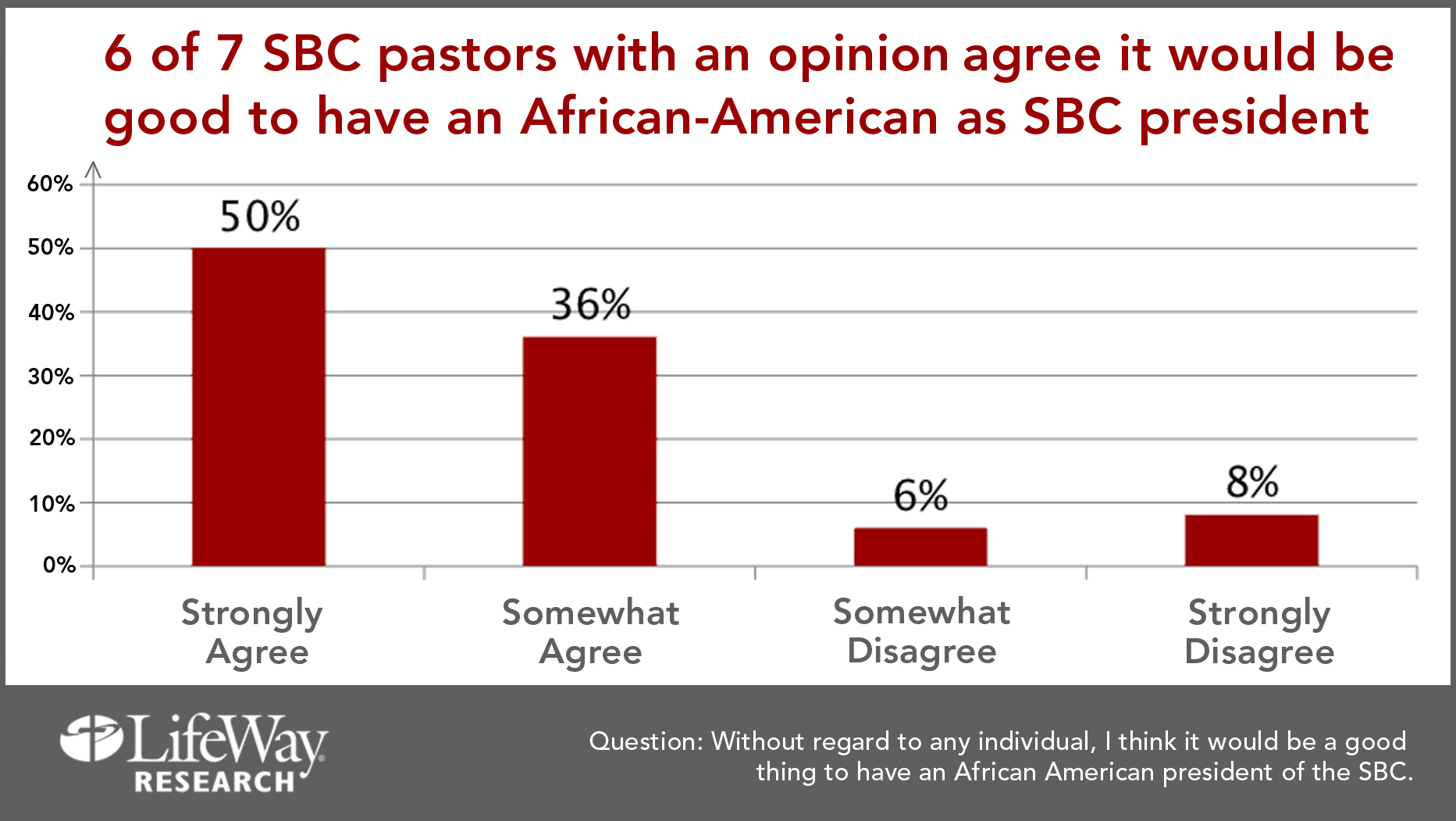 NASHVILLE, Tenn (BP) — Eighty-six percent of Southern Baptist Convention pastors who expressed an opinion believe it would be good for the convention to have an African-American leader.

Fred Luter, an African-American pastor from New Orleans, will be nominated for SBC president at the denomination’s annual meeting in June.

LifeWay Research polled SBC pastors asking their level of agreement or disagreement with the statement: “Without regard to any individual, I think it would be a good thing to have an African-American as president of the Southern Baptist Convention.”

Of the nearly 1,000 SBC pastors who responded, 61 percent agree it would be positive, 10 percent disagree, but 29 percent don’t have an opinion. Of those who had an opinion, 50 percent strongly agree and 36 percent somewhat agree.

LifeWay Research president Ed Stetzer said the results are good news for a denomination born, in part, out of the racial divides of the mid-1800s.

“Southern Baptists have come a long way. In the last 20 years, the percentage of non-Anglo SBC churches has grown from five percent to 20 percent, and now seven percent of Southern Baptist churches are identified as primarily African-American,” Stetzer said. “But, we are still a predominantly Anglo denomination, so it is particularly encouraging to see the openness and enthusiasm for an African-American SBC president.”

Stetzer believes the high number of those not expressing an opinion, and some of those with a negative answer, may indicate many pastors believe race should play no part in selection of SBC leadership.

Regional location of the pastor shows no pattern of significant statistical differences. In fact, the results show many similarities across regions. For example, 66 percent of SBC pastors in the Northeast agree, while 62 percent of pastors in the South agree.

The survey results are reminiscent of public opinion polls taken four years ago that asked if Americans were ready for a black U.S. president. A pre-election CBS News poll in 2008 showed 68 percent of Americans agreed the country was ready for an African-American U.S. president.

Stetzer explained the LifeWay Research question was posed to gain perspective on pastors’ views of this anticipated historical vote, but was not focused specifically on Luter. “We wanted to know about race’s role in denominational leadership,” Stetzer said. “What we didn’t want was a referendum or pre-convention vote of confidence of any individual’s skills or electability. That’s why we asked the question the way we did.

“Pastors, when answering, may have thought about a black SBC leader as being a sign of national racial progress or even a positive pivot point in the direction of the denomination,” Stetzer said. “Either way, more than 8 out of 10 is an overwhelming percentage and a sign of remarkable progress by any measure.”

The question was asked as part of a mail survey of 1,066 SBC pastors conducted April 1 – May 11. The mailing list was randomly drawn from a stratified list of all SBC churches. Surveys were mailed to the senior pastor with the option of completing online. Responses were weighted to match the actual geographic distribution and worship attendance of SBC churches.
–30–
Jon D. Wilke is media relations manager for LifeWay Christian Resources of the Southern Baptist Convention.