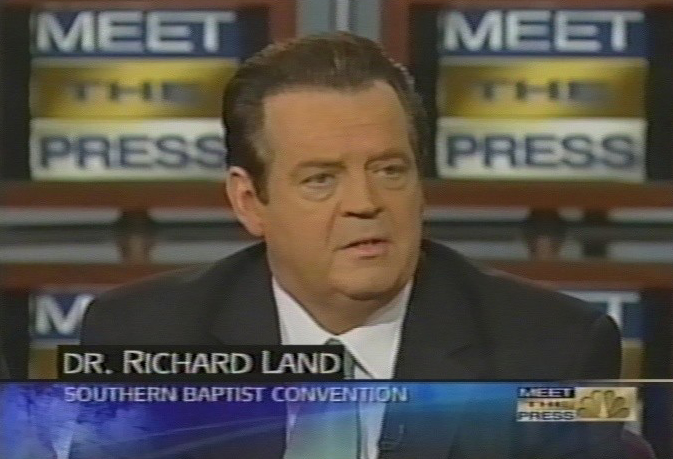 WASHINGTON (BP)–On a day when most Bible-believing Americans were in church, Southern Baptist ethicist Richard Land was on a special Easter-morning edition of NBC News’ “Meet the Press.” While Land had planned to be with his family in his home church near Nashville, Tenn., NBC producers invited the president of the SBC’s Ethics & Religious Liberty Commission to be a guest on the program to discuss the role of faith in America.

Joining Land on the national telecast were U.S. Sen. Joseph Lieberman; Jim Wallis, editor of the magazine Sojourners and the head of Call to Renewal, a faith-based anti-poverty organization; Jon Meacham, managing editor of Newsweek magazine; Robert Drinan, a Jesuit and former member of Congress; and Reza Aslan, the author of “No God but God: The Origins, Evolution, and Future of Islam.” Meet the Press, with an average audience of 5 million viewers, is the longest-running program on network television.

Not surprisingly, the Terri Schiavo case was topic number one on the program, with Meet the Press moderator Tim Russert displaying a quote from Land’s nationally syndicated radio program, “Richard Land Live!” to open the segment.

Then Russert noted that many of the judges who declined to intervene in the case, including the judge who ordered Schiavo’s feeding tube removed, were conservative judges. “What judges are you talking about?” he asked Land.

He said he felt the courts gave the “back of their hand” to Congress in deciding on a “very strict process review” and not taking a fresh look at the particulars of the case.

“I think I speak for millions of Americans who feel that the legal system in this country is broken when there cannot be a better adjudication of this case, a better hearing of this case, a better review of this case, that takes into account the special circumstances of this case,” Land added, suggesting many people are “shocked that parents have so few rights in this case and have had so little ability to get a hearing” and predicting that the Schiavo case would be grist for a new debate in many state legislatures on the issue of parental rights.

Russert asked Land if he held the same concerns about the application of the death penalty by the courts.

Land answered by saying while he supports the death penalty “philosophically and morally,” he does not favor the “way it’s been administered” in the United States. “If you’re going to be supportive of the death penalty being applied in cases of premeditated murder, you have to be as committed to its fair and just application,” Land said, noting, “It’s not been applied fairly and justly in this society.”

Jim Wallis said he believes in “bringing religious values into the public square” but insisted “religion must be disciplined by democracy.” Newsweek’s Jon Meacham suggested a “central Christian virtue” is “humility about anyone having a monopoly on truth.”

“None of us do,” Meacham said.

“When it comes to the public sphere, humility, not hubris, is the way that I think we will be able to talk about religion in a way that does not make people fearful,” he said. It “would be the ultimate tragedy” to try to “make gentle the life of this world … by scaring people,” Meacham concluded.

Russert brought up a statement Land made last September about President Bush’s belief that God wanted him to be president of the United States.

Land quickly noted his account of the president’s words on the matter have been incorrectly reported time and time again.

“The media keeps insisting on making it incomplete, which changes the entire context,” Land said, explaining the president made the statement after attending a church service on the day of his inauguration for his second term as governor of Texas. The minister had preached a “stirring sermon” on the fact “God has a purpose for your life …,” Land recalled. Later in the day at the governor’s mansion, Bush said, “I believe God wants me to be president, but if that doesn’t happen, that’s OK. I’m loved at home, and that’s more important. I’ve seen the presidency up close and personal, and I know it’s a sacrifice and not a reward, and I don’t need it for personal validation.”

Land said he remembered Bush’s comments so completely because he thought at the time it was about “as healthy emotionally as you’re going to find in someone who’s willing to do all that you have to do and all the personal sacrifices you have to make to run for the presidency.”

It shows the president’s heart, said Land, who has known Bush since 1988. “I find him to be a man of spiritual humility who is going to do what he believes is right, as God gives him the light to see the right,” Land said.

Russert noted that John F. Kennedy closed his inaugural address in 1961 by saying, “Let us go forth to lead the land that we love, asking his blessing and his help, but knowing that here on Earth, God’s work must truly be our own.”

“That’s politics and religion together in a very clearly stated way,” Russert said to Robert Drinan, the Catholic priest.

Drinan said that while he agreed with Kennedy’s assertion, “the problem is when some religions say that you have to impose in the law our particular beliefs. Certain fundamentalists think that gays should be discriminated against, and that’s not in the common tradition. There’s a common core of moral and religious beliefs, and frankly, we are in total violation of that. We are supposed to be good to the poor; we have more poor children in America than in any other industrialized nation. We’re supposed to love prisoners and help them; we have 2.1 million people in prison, the largest of any country of the earth. We also allow 11 children to be killed by guns every day. All of the religions are opposed to that. That’s violence. Why don’t we organize on that?” Drinan asked.

Russert noted there was even a faith component to the story of Brian Nichols, the alleged courthouse shooter in Atlanta, when Ashley Smith, the woman who facilitated his eventual capture, read a section from “The Purpose-Driven Life” to him after he took her captive in her Atlanta area apartment.

Rick Warren, founding pastor of Saddleback Church in Lake Forest, Calif., is the author of the best-selling book from which Smith read. She said God brought Nichols to her door “so he couldn’t hurt anyone else.”

“Ashley Smith showed Christian compassion to this man,” Land said, suggesting it might be one of the few times in his life “that someone really cared about him and tried to serve him.” Land recalled that Chuck Colson of Prison Fellowship has told him “he’s still shocked at the number of prisoners that they minister to, and it’s the first time in their lives that someone has really cared about them and really valued them and sought to help them.

“Rick [Warren] has touched a nerve in this country. And the nerve is, we’ve sort of plunged the depths of self-worship in this country,” Land said. “Rick has touched a core that Americans don’t find the purpose and the meaning that they want in their own lives in [their] search for self-fulfillment. They’re finding [a purpose for their lives] in serving others and in caring for others.”
–30–
To read the transcript from this special edition of NBC News’ “Meet the Press” or view video clips featuring ERLC President Richard Land and other guests on the program, visit http://www.msnbc.msn.com/id/3032608/.