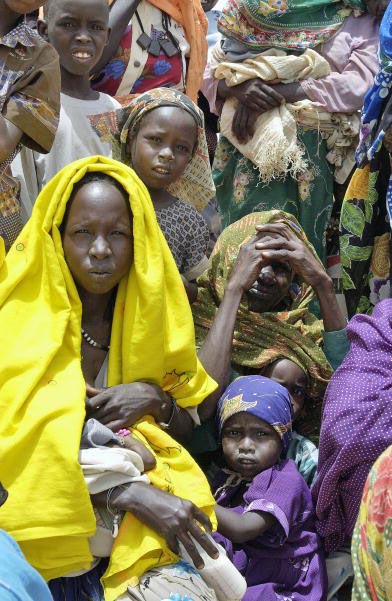 KHARTOUM, Sudan (BP)–Southern Baptist relief funds are helping hungry and thirsty refugees in the midst of what the United Nations is calling the worst humanitarian crisis in the world.

More than 1 million people are homeless and as many as 30,000 dead in western Sudan’s Darfur province as Arab militias drive black Africans from their land.

Arab “Janjaweed” militias have burned thousands of homes and used systematic rape to terrorize black African villagers into leaving the area. The Sudanese military has provided air cover and other support for the militias.

The situation has grown so dire that U.S. Secretary of State Colin Powell and United Nations Secretary-General Kofi Annan both visited Sudan during the same week in early July. They pressured the government to stop the genocide and prevent starvation and disease on a massive scale.

Food and water are scarce, and the recent onset of the rainy season could unleash a malaria epidemic in crowded refugee camps, a humanitarian worker told Baptist Press.

As many as 350,000 people could die of disease or malnutrition this year in what the United Nations has identified as the world’s worst humanitarian crisis.

An initial emergency grant of $5,000 from the Southern Baptist World Hunger Fund purchased food and grain for refugee camps, according to hunger and relief consultant Jim Brown. Another $100,000 will be needed to get clean drinking water into the camps, and long-term plans call for helping repair and dig wells in the area.

While Sudan has been notorious for a two-decade civil war between Muslims in the north and Christians and animists in the south, this conflict involves Muslim-on-Muslim oppression, the humanitarian worker said.

“My friends from Darfur say all the villages have been destroyed, but other humanitarian workers say the destruction is not so complete,” the worker told Baptist Press. “Of course, neither group has seen more than a small part of the country because access is limited by the government and the militias.

“It has shocked them that, as Muslims, they are under threat from other Muslims,” he added. “Now those who have fled are saying, ‘I can’t pray anymore. Why should I remain a Muslim? Muslims only hurt my family and take my land.’

“Their foundation in Islam is beginning to be shaken. They are beginning to really question their Islamic faith.”

While financial contributions are needed for the relief effort, Southern Baptists with a heart for Darfur ask for concerted prayer on a number of fronts:

— “Please pray that relief agencies can have access and freedom to do their work,” the worker said. “The rainy season started in June, and that makes everything 10 times worse. Many refugees literally are living under bushes. Pray that shelter can be secured, disease is held at bay, food and water can be distributed.”

— “Pray that next year’s crop can somehow be planted. This is the time for planting crops, but it is unsafe for people to do so. If they do not return home now to plant their crops, they will miss an entire cycle of harvest, resulting in widespread hunger in the months ahead.”

— “Pray that these people will cry out to the One True God — and that they will know miraculous response to their cries, whether in dreams and visions or in physical relief. Pray that they will continue to question and seek truth in their hearts. Pray that they will be faced with their own sin and their need for forgiveness in Christ. Pray that believers will have opportunities to share spiritual relief, as well as physical.”

— “Pray for Christians living in southern Sudan who have experienced hard things at the hands of northern Muslims. It is very easy for them to be apathetic toward the plight of the refugees. If Muslims who are experiencing theft and death at the hands of their Muslim neighbors experience grace and mercy in the form of food, shelter and compassion from Christians, it could be very powerful. Pray for Southerners to be forgiving after experiencing so much hurt.”
–30–
Contributions for hunger and relief ministries in Sudan may be sent to: Sudan – General Relief, International Mission Board, P.O. Box 6767, Richmond, VA 23230.