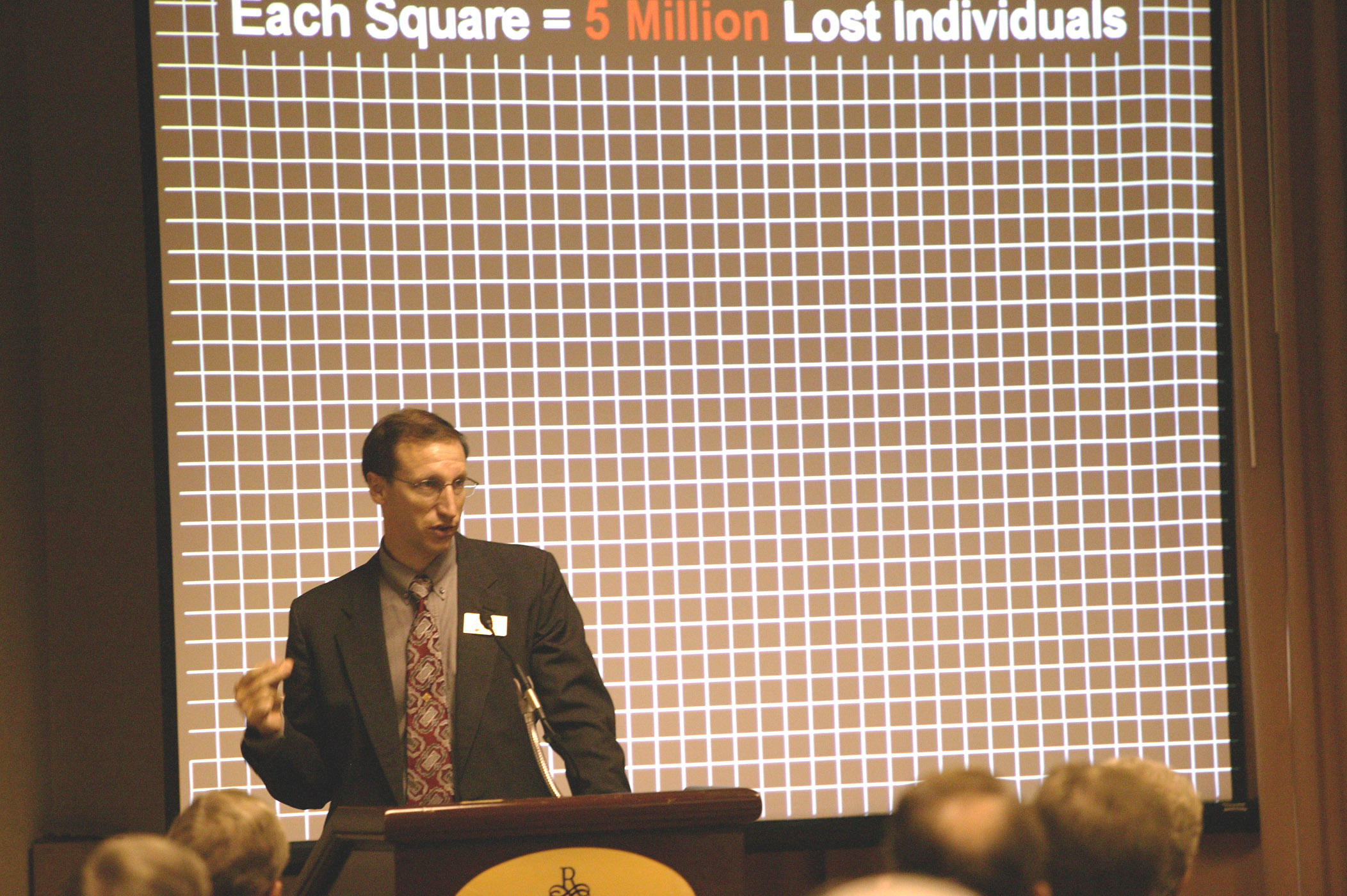 RICHMOND, Va. (BP)–The International Mission Board must push past distractions and stay focused on the vision of taking the Gospel to all peoples, President Jerry Rankin told trustees during a Sept. 8-10 meeting in Austin, Texas.

Trustees approved a major change in the way new missionaries are sent to the field, heard a preliminary report on the board’s 2004 budget, appointed 61 new missionaries, discussed how the word “Baptist” describes churches being started overseas, and heard the testimony of a missionary whose husband died in a March 4 terrorist attack in the Philippines.

A VISION OF ‘ALL PEOPLES’

With financial challenges limiting the number of new missionaries the board can send, Southern Baptists must stay focused on the vision of all peoples gathered around God’s throne, Rankin said.

“Ours is not a task that can be resource-driven and limited to simply doing whatever we can do for whatever may result,” he said. “We must stay focused on that end vision of taking the Gospel to all peoples with a passion that says ‘whatever it takes.’

“We must be ever vigilant to avoid distractions that would divert us from moving forward in a unified focus on our objective.”

More than 5,000 people groups — a total of 1.5 billion people — live without access to the Gospel, said Avery Willis, the board’s senior vice president for overseas operations. Asia is home to 61 percent of the world’s population, and half the world lives in cities.

“How do we become the best stewards of what God has given us?” Willis asked. “Long term, what does the International Mission Board do with the challenge we have around the world?”

During an Aug. 4-8 “Global Strategy Summit,” leaders of the board’s 15 overseas regions discussed how to make the most strategic use of limited human and financial resources.

“We took a look at the entire world,” said John Brady, leader of IMB work in the northern Africa and Middle East region. “As we saw the multiplied millions … and as we saw city after city that have not been reached with the Gospel, our hearts were broken.

“If we are going to reach every people group, we … are going to have to have new strategies to get where we have never gotten before,” he said. “We want to do whatever it takes, under Christ’s leadership and Lordship, that all might have a chance to be touched by the Gospel message.”

Trustees approved a recommendation that all new candidates for long-term missionary service will be required to complete a three-year apprenticeship before being changed to career or associate status.

The new approach will help new missionaries by giving them a mentoring relationship with experienced workers as they adapt to cross-cultural ministry, he said.

The change will not affect personnel currently serving in the board’s short-term programs or candidates already in the approval process, Hatley noted.

Trustees also heard a report that the budget that will be recommended for 2004 is expected to reflect a $20 million reduction over the current budget.

Half that reduction reflects a lowered income projection, while the other half represents $10 million in capital expenditures that will not be made until the operating budget is met, said John Hatch, chairman of the trustee’s finance committee.

The proposed budget would reduce missionary operating budgets by 7 percent and plan no salary increases for missionary personnel or stateside employees.

The budget is based on Southern Baptists’ reaching their $133 million goal for the 2003 Lottie Moon Christmas Offering for International Missions — a 15 percent increase over 2002.

Last year’s offering fell 8 percent short of its $125 million goal, forcing the board to reduce missionary appointments in the coming year by more than 40 percent. The reduction comes at a time when record numbers of church members are coming forward for missionary service.

Many Southern Baptist churches have made supplementary gifts to the offering to cut into the deficit, while others are setting even more challenging goals for this year’s offering. Rankin has challenged congregations to give $150 million this year as a tangible expression of the sacrifice required to reach a lost world.

A sense of urgency about a hopelessly lost world is what compels the 61 new Southern Baptist missionaries who were appointed Sept. 7 in a service at Great Hills Baptist Church in Austin.

“This generation could be our last chance to share the Good News with a lost and dying world,” said one new worker. “As the sun sets each day, we have one less day to accomplish our unfinished task.”

Another new missionary testified: “On my knees, looking out the window at the stars and moon, I prayed for all the peoples and countries I had served on missions. When I mentioned an unreached people group from Southeast Asia, it was like my heart broke. I knew that God had poured His love for these people in me.”

A third worker and his wife learned from their missions-minded pastor that more than 1 billion people have no access to the Gospel. “As we considered God’s call to missions,” he said, “the question gradually changed from ‘Should we go?’ to ‘How could we stay?'”

Reports of “church-planting movements” — the rapid multiplication of congregations among a people group — have raised questions whether churches being started overseas with the assistance of IMB personnel can be accurately described as Baptist, Rankin told the trustees.

Southern Baptist workers and their overseas partners reported 8,369 churches organized in 2002. Nearly 3,535 of them were started in one church planting movement in Asia.

Once started, the wildfire of a church planting movement has the potential to spread the Gospel throughout an entire people group, but a missionary can only disciple, train and anchor church leaders in the Word of God, Rankin said. Because those churches are autonomous, missionaries do not control what those churches will believe and practice.

In some places, denominational labels are illegal or may cause persecution, Rankin said. In others, the new churches do not want to affiliate with older “Baptist” groups whose theology is liberal.

IMB missionaries use the Southern Baptist Convention’s Baptist Faith and Message statement to explain who Southern Baptists are and what they believe, he noted. Sometimes churches even adopt the BF&M as their own faith statement. Such decisions, however, belong to those churches, Rankin said. If they adopt positions different from Southern Baptists, they make that decision independently of a missionary’s teaching.

“The main issue is to understand the nature and the power of the Gospel,” Rankin said. “Many have identified a church planting movement as a movement that is out of control as churches plant churches. Is that not what we want to happen? Is that not the power of the Gospel? Is the life-changing message of God’s Word, indwelt by God’s Holy Spirit, not something that should spread spontaneously?”

Southern Baptist missionary Lyn Hyde told the trustees that even though her husband, Bill, was among 44 people killed March 4 by a terrorist’s bomb in the Philippines, she is still committed to following her call to missions.

“In almost 25 years on the mission field, March 4 was the only time I was not standing next to my husband at the airport, waiting to pick up fellow missionaries,” she said. “I know God still has a purpose for me.”

She asked the trustees to pray for her on Oct. 22, when she will fly back to Davao City, landing at the same airport where her husband was killed, to continue her grieving process and decide whether God wants her to continue to serve there or somewhere else.
–30–
The next IMB trustee meeting is scheduled for Nov. 10-12 in Lexington, Ky. A missionary appointment service is set for 7 p.m., Nov. 11, in conjunction with the annual meeting of the Kentucky Baptist Convention. (BP) photos posted in the BP Photo Library at http://www.bpnews.net. Photo titles: MORE LOST THAN EVER and A QUESTION OF STEWARDSHIP.