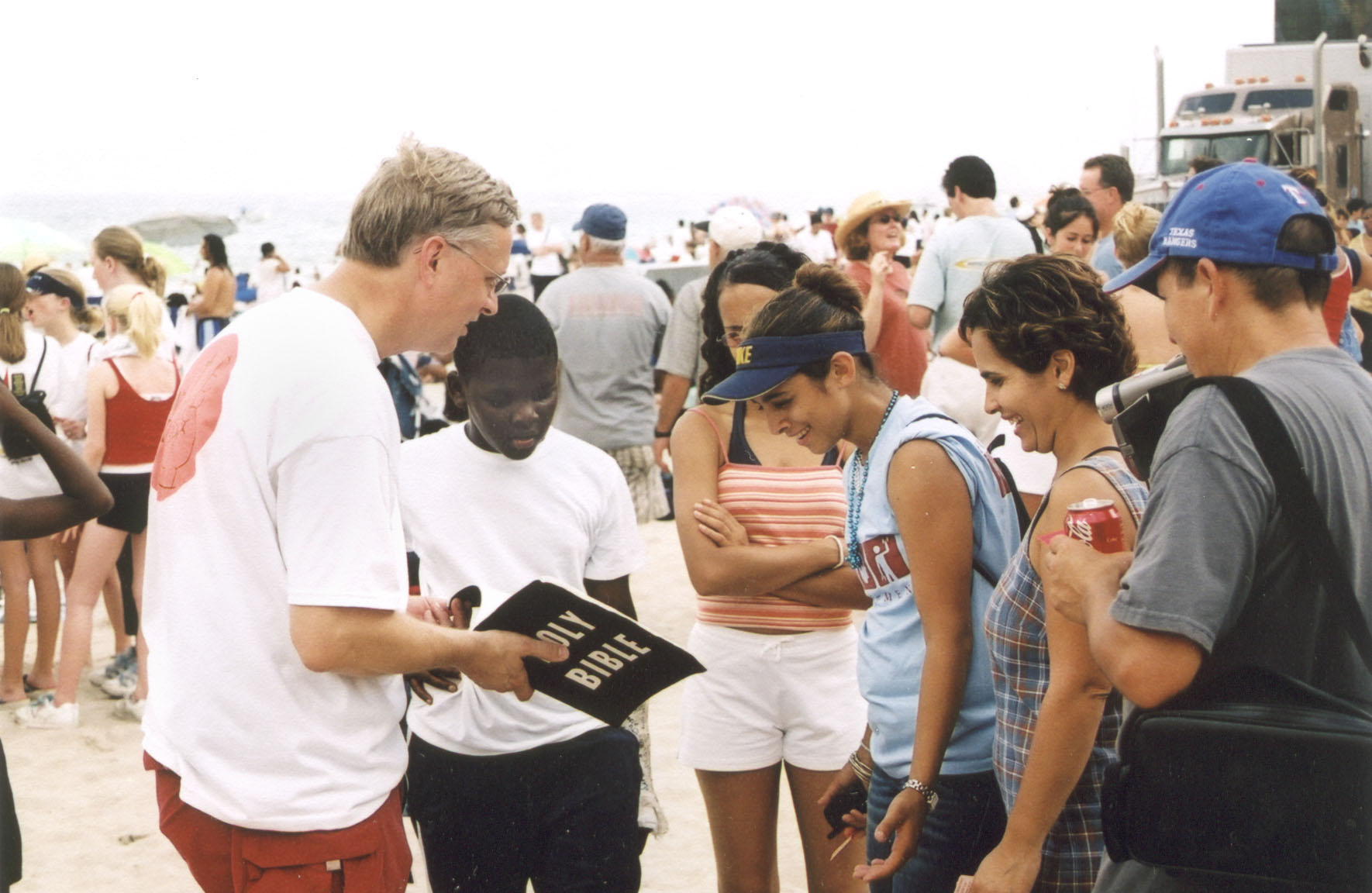 FORT LAUDERDALE, Fla. (BP)–In what was billed as one of the largest religious gatherings ever in the United States, thousands of Florida Baptists from more than 200 area churches added their support to the latest of international evangelist Luis Palau’s massive free evangelism festivals, a “Great music & Good News” Beachfest in Fort Lauderdale.

Burton, who took his own bag of evangelism tools to the beach — a “magic” Bible, the Evangecube, and word puzzle stickers with the Gospel message — joined thousands of others who volunteered to talk to people about Jesus, serve up food, and keep an eye on the rowdy, beach-clad crowds. Festival organizers reported 5,000 documented decisions for the March 22-23 outreach.

The Beachfest featured something for everyone — a 10,000-square-foot pro skateboard park, a VeggieTales children’s area, a Sports Zone staffed with Miami Dolphins players and some of the inspirational world’s top rock, gospel and pop artists like Third Day, TobyMac and Jump 5.

Even with record-setting temperatures on day one, and drenching rain on day two, the crowd stayed put on the 2,000-foot-long beachfront site, shading each other with colorful beach umbrellas and huddling inside vendor tents when the torrential downpours hit.

Security concerns drew more than the typical number of both uniformed police officers and off-duty volunteers, although how many more is not clear, Andy Palau, project coordinator for Beachfest, told the Witness. He said the unusually high cost of providing security was anticipated in light of world events and built into the $2.1 million budget provided by hundreds of local and national businesses.

Palau said Homeland Security, the Federal Bureau of Investigation and anti-terrorist task forces in the Southeast encouraged the Portland-based Luis Palau Evangelist Association (LPEA) to “absolutely, go for it,” in planning for the festival.

“We have to press forward and put our confidence in the government to do its job as best as they are able and then trust the Lord that all things work together for the good,” Palau said.

And trusting in God’s sovereignty comes easy for Palau. Calling himself a “poster child” for this kind of evangelistic event, the 37-year-old former Grateful Dead concert-goer, said he did not make a decision to trust Christ until he was 27.

“The methods can change over time, but the Gospel message has to stay the same. It is sacred. But none of this is sacred,” Palau said, gesturing wide at the rock-concert and fun-and-games set-up at the beach. “This is just for a season; it’s to capture the attention of the city.”

Robert E. Reccord, president of the Southern Baptist Convention’s North American Mission Board, expressed the same sentiment in an interview with the Witness. Reccord spoke March 21 at a Proclamation Evangelism Network conference for evangelists held in conjunction with Beachfest.

“The substance of the Gospel must never change, but the style must be adaptable to the culture,” Reccord said. “Are we going to sit back in our stained glass ghettos and expect them to come to us, or are we going to do what Jesus did and take the Gospel to them and adapt it to their life — keeping the substance the same?”

Reccord credited the Argentine-born 68-year-old Palau, who has been involved in mass evangelism for more than 35 years in 69 nations, for his unique style, which includes taking the Gospel to the beach.

“Praise God for the guy who like Peter will get out of the boat and take off and walk in faith,” Reccord said of Palau.

Ben Smith, Jacksonville-area Baptist Student Ministries director of the Florida Baptist Convention, careened around the beach with his infant son, in leading nearly a dozen students who moved up the coast to Beachfest after completing various projects through the “For You Miami” initiative supported in part by the Miami Baptist Association.

“This is a great way of having a creative ministry,” Smith said. “We’ve got to think outside the box and do some things and reach people right where they are.”

Palau, poised and ready to deliver a message each night, dressed casually in khakis and a blue denim shirt, looked around at the mostly young crowd and spoke plainly about morality.

Casting an inclusive vision, Palau, in Spanish and in English, said: “Safe sex is no sex outside of marriage. That is safe sex.” He told the youth the power of Jesus Christ would help them control themselves. “God is love, real love is not sex,” he said.

As for God’s claim on their lives, Palau said His plan is for people to be holy.

“I beg you to come running to Jesus because He loves you,” Palau said. “Some of you are pushed around. People call you loser, geek … or worse. Jesus Christ said you are my friend when you do as I command you.”

Volunteers from more than 1,100 churches across the nation worked during the week prior to Beachfest to build houses for Habitat for Humanity and collect food items for Operation Compassion (a regional faith-based service), according to festival organizers.

Party-goers around the country also linked to Beachfest live via satellite to host “virtual” beach parties in their communities, and more than 1,000 radio stations carried the event live.
–30–
(BP) photos posted in the BP Photo Library at http://www.bpnews.net. Photo titles: BELIEF AT THE BEACH, A CHILD’S TOUCH, RAMPING IT UP and SEEKERS IN THE SAND.