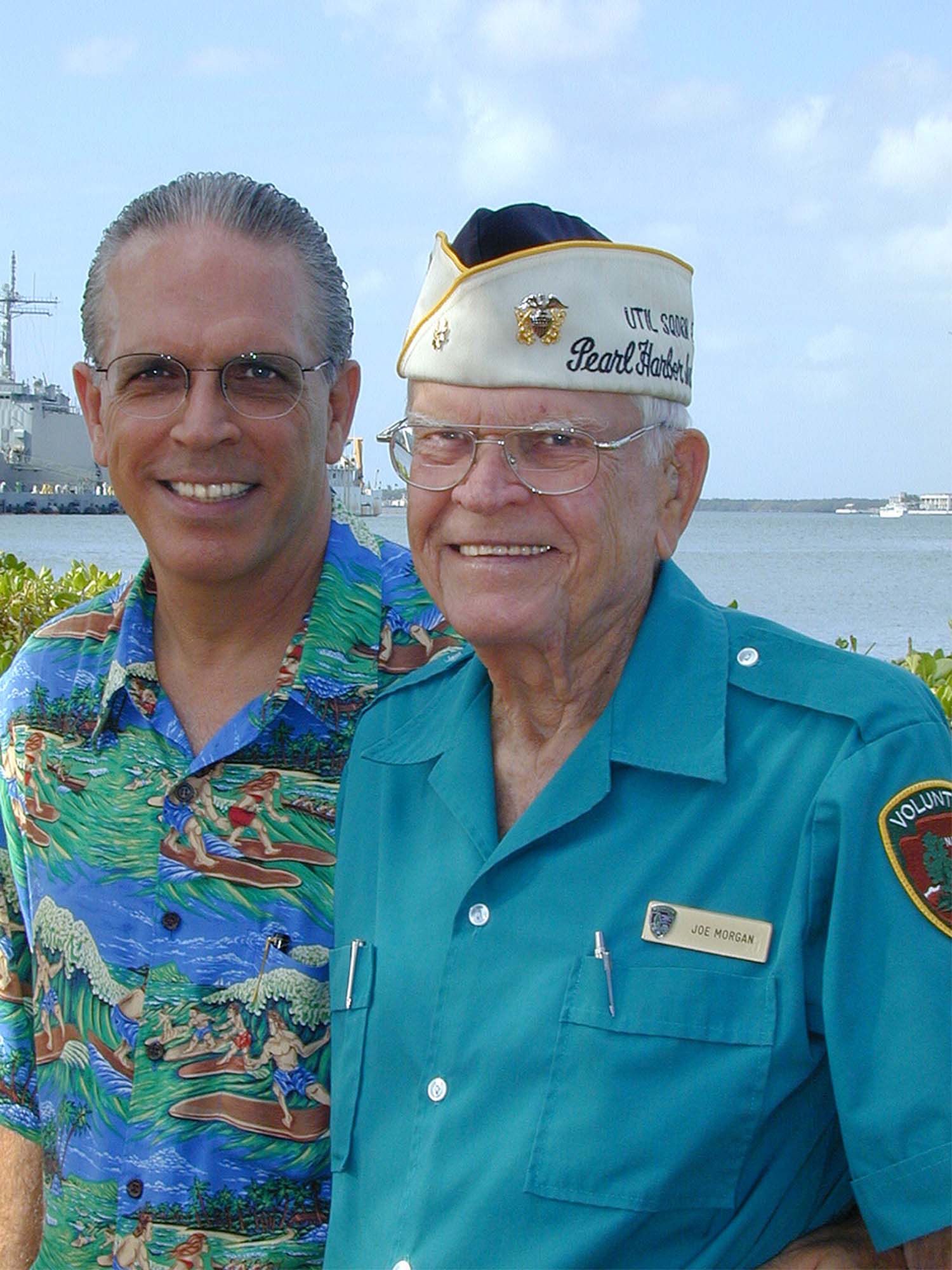 Sixty December 7ths later, Joe Morgan still recounts the horror of Japan’s surprise attack to many of the millions of tourists who visit the Arizona Memorial in Pearl Harbor. When he does so, he shares how God helped him reclaim the call to preach and heal the scar of hatred that the attack had left on his life.

Every Thursday, despite failing health, Joe tells his story once or twice. And almost every time, it leaves people in tears, partly because of Joe’s firsthand account and partly because they identify with the emotional struggles he faced.

“Grown men and women dealing with anger and hatred, this story brings them to a catharsis,” said Robert, who assists his father during his talks. “Some can’t say anything. They can only hug him.”

“One of my goals is to help people get over their anger at the Japanese and other people and learn how to forgive as God forgives us,” Joe said.

Recently, a young man visited the Arizona Memorial shortly after losing his fiance in the World Trade Center attack Sept. 11.

“You’re helping me heal,” the man told Joe after hearing how a few years after the war Joe met and forgave the Japanese officer who led the attack on Pearl Harbor.

When some visitors learn how infrequently Joe speaks, they walk away believing that they had a divine appointment, Robert said. “They say, ‘Hearing the story was the high point of my vacation,'” he added.

Growing up in Little River, Texas, in the 1920s and 30s, Joe felt from the moment that he committed his life to Christ at the age of 6 that God was calling him to preach. He publicly accepted the call as a teenager and began preaching occasionally.

Joe intended to go to college and then seminary, but when he flunked a history class, he dropped out of high school and joined the Navy.

In the Navy, he began to drift from God, living the stereotypical life of the young sailor. He began to drink alcohol, swear, smoke, chew tobacco and stay far away from church.

But even in his rebellion, Joe said, “The Lord never turned me loose all this time. I knew he had a hold of my tail.”

The morning of the attack, Joe was on duty on Ford Island in the middle of Pearl Harbor when he heard planes approaching. At first he and the other sailors thought the planes were from U.S. aircraft carriers staging a mock attack. Then the sailors heard an explosion.

They thought a plane had crashed until they saw a plane dropping two bombs on a nearby runway. As it pulled out of its dive, they saw the symbol of the Rising Sun and knew Japan was attacking.

Joe admits that his first reaction was fear. He hid behind a tractor wheel as another plane made a strafing pass, but when he realized he was close to a high-explosive magazine, his fear turned to terror and he ran for a safer place.

Back in his hangar, Joe found a place to hide in the recesses of a steel I-beam in the roof. But when he saw other men firing at the planes with pistols and rifles, Joe knew he had to help. Trained to maintain and man machine guns, Joe joined the desperate effort to mount machine guns on planes near the hangar.

Joe manned the last gun mounted and as he fired he became gripped by anger at the attackers. Joe recalled helping to shoot down one of the enemy planes, which eventually went into a kamikaze dive hitting the U.S.S. Curtis. He stayed at the gun throughout the night as the island feared further attacks. Although he didn’t suffer any physical wounds, he left the battle scarred by a deep hatred for the Japanese people.

“I think the anger was approved by God but not the hatred that followed,” Joe said.

While manning the gun through the night, Joe said, “I promised the Lord that if I lived through the war, I’d get out of the Navy and get my training to be a preacher.”

Shortly after the attack, Joe was transferred to another unit on Maui while his previous unit was sent to the South Pacific where it suffered heavy casualties. Joe felt God had a reason for protecting him, and the only wound he carried from the war was his hatred turned animosity for the Japanese.

After the war, Joe kept his promise and left the Navy. He attended Oklahoma Baptist University in Shawnee, where after being inspired by a history professor, made the subject that he flunked in high school his major. After OBU, Joe earned a divinity degree from Southwestern Baptist Theological Seminary in Fort Worth, Texas.

But as he faithfully followed God’s call, he also carried his hatred for the Japanese. He never hated Japanese Americans who abound in Hawaii, just those from Japan. Two years into his Wailuku pastorate, Joe heard that Mitsuo Fuchida, the Japanese naval commander who led the attack on Pearl Harbor, was speaking on Maui.

“He was flying high above my head that day, giving orders to his pilots over the radio,” Joe recalls in his written account.

Fuchida, however, had become a Christian after meeting a former prisoner of war who had returned to post-war Japan as a missionary. Joe felt the animosity resurface and didn’t know “whether to shake Fuchida’s hand or shoot him” if they ever met.

“God gave me the grace to listen,” he recalled.

After the talk, Joe, touched but still unsure of how he felt, introduced himself to Fuchida as a Pearl Harbor survivor. Fuchida bowed slightly, said “Gomenasai [I’m sorry],” and reached out to shake Joe’s hand.

At that moment, Joe realized God had changed his heart.

“We shook hands not as former enemies but as brothers in Christ,” Joe says at the close of every presentation on the memorial. “We both had received God’s mercy and forgiveness.

“I believe what we both experienced is the answer to bringing peace to the world today.”

Joe served several other churches in Hawaii and later returned to the military as a chaplain, including two tours in Vietnam. And he went on to earn a doctor of ministry degree.

He returned to Hawaii to pastor before health problems forced him to retire. He’s the chaplain of the Pearl Harbor Survivors and the honorary chaplain of the Arizona Memorial. In addition to sharing about God’s work in his life with thousands of visitors, Joe also performs weddings and funerals for survivors and park rangers on the memorial. He shares his testimony through a brochure that he prints at his expense and distributes to anyone who wants one.

Robert often reminds his father of the important “church” Joe serves now at the Arizona Memorial.

“The park rangers adore him,” said Robert, an ordained minister, “and to the congregation of tourists he can say whatever he wants to say about how Pearl Harbor changed his life.”

They both marvel that Joe is allowed to talk openly about God at a government facility. Because of a loss of short-term memory, Joe can no longer tell his story himself. Instead of a monologue, Robert interviews his father and helps him through rough spots.

Visitors, already moved by Joe’s story, are touched even further as they see a son help his father.

In a life that has included the attack on Pearl Harbor, World War II, Vietnam, three heart bypass surgeries and a heart attack, Joe agrees with his son that telling his story of what God has done in his life is the only reason he is still alive.

“He’s still here,” Robert said, “because I believe he has a story to tell that you need to hear.”

To read more about Joe’s story, visit www.joemorgan.org (effective in mid-December) or www.barefoot-rock.com/joe.
–30–
(BP) photos posted in the BP Photo Library at http://www.bpnews.net. Photo titles: NO HARBOR FOR HATRED, FEAR TO FORGIVENESS, MARRIED NEARLY 60 YEARS, HEALING FROM HATRED, BACK THEN and JOE & BLANCHE.