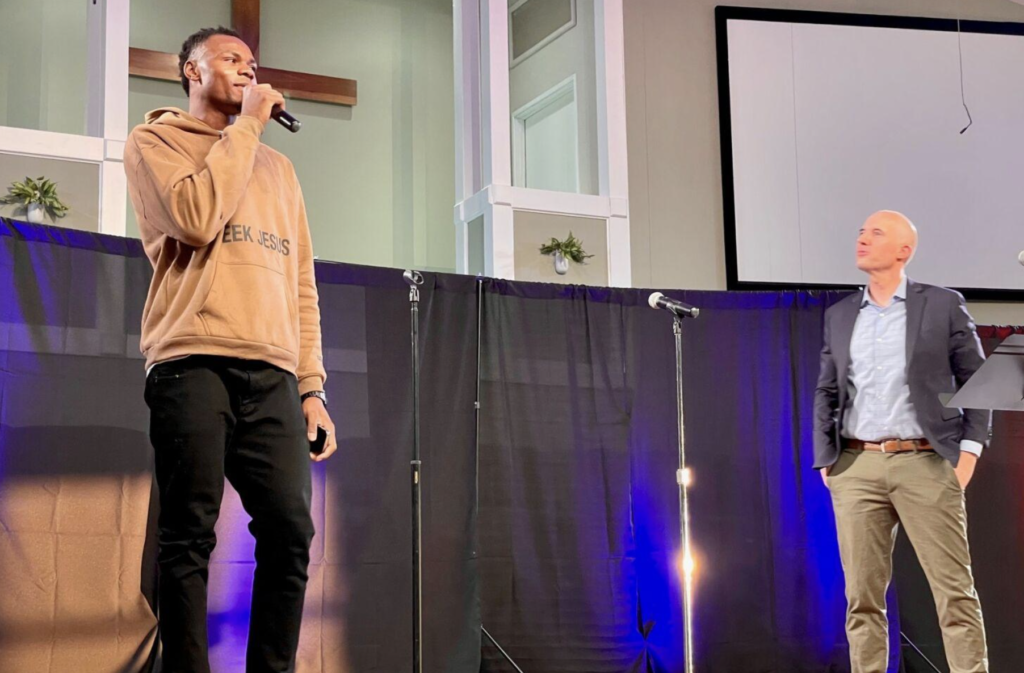 Being an incredible basketball player is what he does. But being a devoted Christian is far more important to Kentucky’s beloved big man who is the frontrunner for national player of the year and a unifying force behind a team with national championship aspirations.

About a month ago, at the urging of his children’s ministry director, Pastor Daniel Ausbun invited Tshiebwe to speak at a special African service on Sunday night at Lexington’s Broadway Baptist Church. To no one’s surprise, he was a big hit.

He was humble and heartfelt sharing his story of faith with the congregation of about 200. Basketball may be how everyone knows him, but it wasn’t part of what he talked about in only the second sermon he’s ever delivered.

“I thought the young man did a fantastic job,” Ausbun said. “He spoke probably more like 15 (minutes). He also came up and welcomed himself and he had to sign autographs for one hour (after). He is a godly man. He told me he was called to preach and wants to fulfill his father’s footsteps.”

Tshiewebe’s father, Mbuyi Tshiebwe, was the head pastor at a New Apostolic church in the commune of Kana prior to his death from poisoning in July 2012. He hopes to bring his mother here from the Democratic Republic of Congo in time to watch him play in the NCAA tournament.

“He’s real passionate,” Ausbun said. “When he spoke to me afterwards, he didn’t even talk about basketball. He wanted to talk to me about my call to preach. He wanted feedback on his sermon.”

Sherry Lyons, who works as the children’s ministry director, mentioned trying to get Tshiebwe to speak at a staff meeting. Ausbun reached out to him and Tshiebwe gave him an “I don’t know” answer, not because he didn’t want to come, but because he didn’t know if or when his coach, John Calipari, was going to call an extra practice. If so, he couldn’t make it.

Ausbun had texted him about a month ago but hadn’t heard back until Sunday morning when Tshiebwe texted and said he was coming, as long as a surprise practice wasn’t called.

“He wanted to come; he really did,’ Ausbun said. “It was one of those things with his schedule being so tight, we couldn’t hardly promote it. We mentioned it in the second service, but I didn’t text the entire church because Coach Cal could call a practice. I didn’t want to overpromise and underdeliver. I was hesitant to even say anything.”

For those who did make it to the African service, Tshiwebe’s appearance was a bonus.

“It was a powerful service,” the pastor said. “We had two people get saved. It was a lengthy service. The guy wants to be there. The poor man, we couldn’t even start on time because of the photos. He told me it was like that everywhere he went. He said at one place he signed a thousand autographs. Everybody with a phone in their pocket wanted a picture. He’s a wonderful basketball player and might win player of the year. The timing, everything, fell into place. I don’t know if I could reproduce it again. I told the staff there’s a 40 percent chance of this happening.”

Lyons said she follows UK basketball intently and saw Tshiwebe sharing his faith whenever anyone put a microphone in front of him. She thought his country of origin made him the perfect guest for the event.

“You can tell it’s in his heart,” she said of his faith story. “I don’t know if he came prepared or not. He used his phone for a Bible verse and the rest came from his heart. Very genuine. He barely even touched on basketball. He talked about his family, his dad was a pastor, and that’s what he feels he’s supposed to do. He can influence so many people. God can use him. I hope he stays genuine.”

She said it worked out perfectly that the church couldn’t advertise his coming to keep the crowd more intimate. “It really was perfect. I’m sure everywhere he goes, there’s just a mob. They did mob him, but it was a small enough crowd that he didn’t feel overwhelmed.”

“I think he’s probably looking for a Christian home to be able to worship or so he can have some mentors anyway,” Lyons said. “He’s young and needs someone who he can ask questions.”

Ausbun, who is from Alabama, said UK has won him over this year. Tshiebwe may have had something to do with it.

“He is the unifying force on that team and that man is pure muscle,” Ausbun said of the 6-foot-9 center. “I touched his shoulder … goodness! He’s passing through Kentucky, and this was one of those services that really worked. He said it was just like being back at home for him. I hope they win it all, I really do.”