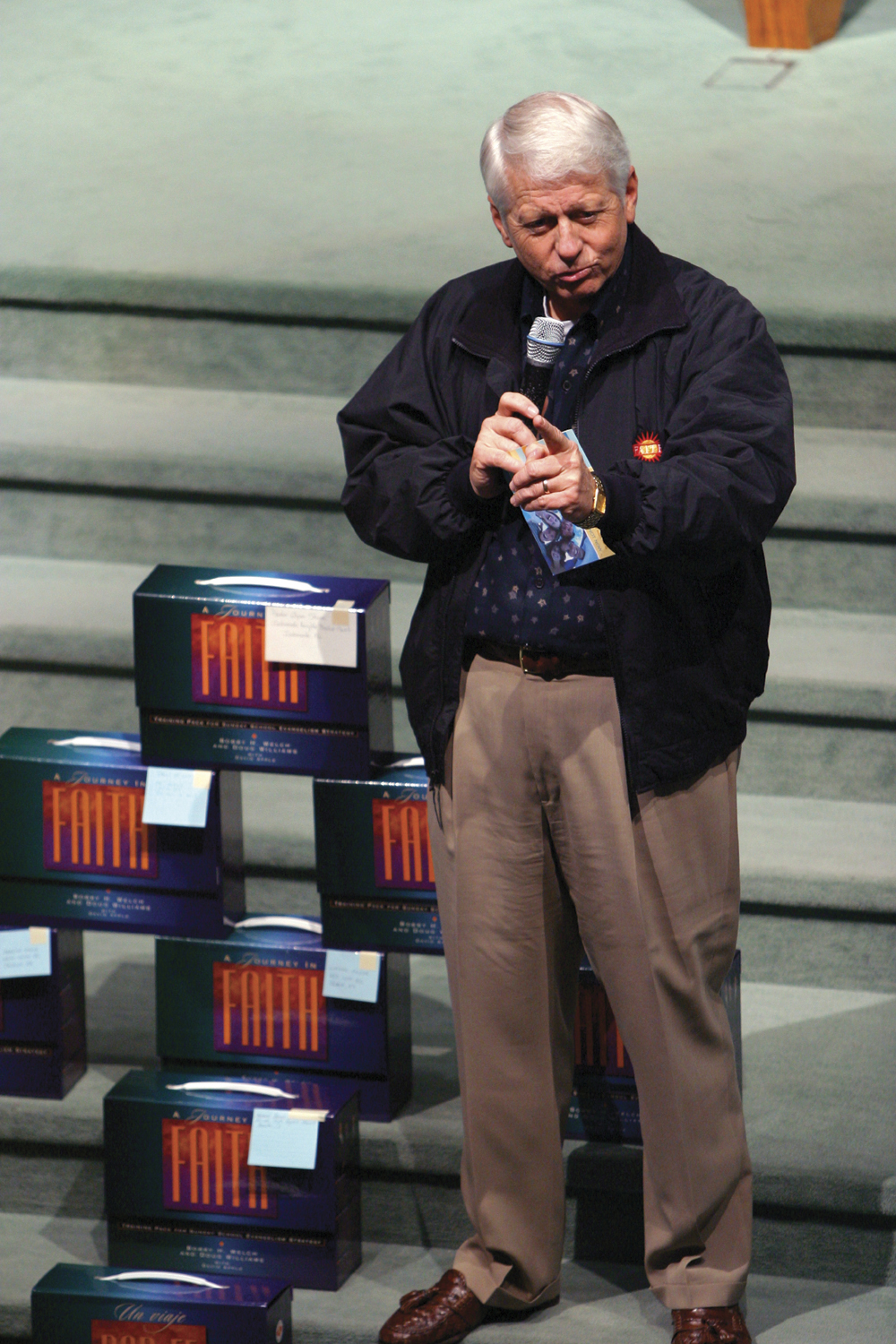 DAYTONA BEACH, Fla. (BP)–It takes some degree of trust for anyone to fly these days, but for Bobby Welch, a million-miler with Delta Sky Miles, it really takes FAITH.

Welch is pastor of First Baptist Church in Daytona Beach, Fla., and the heart and soul behind the FAITH Sunday School Evangelism Strategy. Welch is willing to do all the travel to spread the news about FAITH because, he said, he knows without a doubt that FAITH works.

“There was never a day in my life I didn’t know that FAITH would work. It’s worked for 21 years and 42 semesters here at my church,” he said.

FAITH is a strategy that combines evangelism and Sunday School. It originated at First Baptist, Daytona Beach, and was introduced to Southern Baptists five years ago by LifeWay Christian Resources.

In FAITH, teams of three people go visit people and share their faith with them. Visits can be evangelical in nature or may be ministry visits to other church members.

Calling the past five years an “overwhelming blessing,” Welch said, “we have the potential to do twice as much. I know we can train twice as many churches. It’s just a matter of us being able to do that.”

Welch and Doug Williams began developing what became FAITH more than 21 years ago at First Baptist. Williams, who now serves as a FAITH consultant with LifeWay, was on staff with Welch at First Baptist for 17 years.

“We started with pure EE [Evangelism Explosion] for several years, then said this won’t get it,” Welch said. “Then we started cannibalizing that and baptizing it and got to what we called ES, which is the essence of FAITH. That was when we changed the complete outline and started over.”

Welch said Williams is still heavily involved in FAITH training. “He stays on the road all the time. I think he has done some 70-odd clinics. He knows that book by heart. He is a [FAITH] mechanic.”

Welch said his friendship with Williams has been one of the “greatest blessings of my life. It about killed me when he left and retired to Alabama. It’s to LifeWay’s credit that they brought him on as a consultant.”

The act of going out and knocking on doors is key to FAITH. Safety and fear issues, gated communities and apartment complexes with no solicitation policies present obstacles to unannounced visits, but, Welch said, that isn’t the problem some people seem to think.

“It’s such a tragedy that there is this flow of information saying to religious circles that knocking on doors won’t work,” Welch said. “FAITH flies in the face of that. It does work. We are swimming against the tide against pollsters who say visitation won’t work.

“You keep reading all those books that say this won’t work,” he said. “Well, I say just throw those books in the road!”

The road is something Welch knows well. He is constantly traveling, spreading the word about FAITH and being an encourager to those learning about the outreach.

Each year LifeWay hosts four National FAITH Institutes, as well as clinics at local churches, where pastors and church members can come to be trained in the FAITH Sunday School Evangelism Strategy. Welch attends all four national institutes every year and about 10 of the clinics. On top of that, he does other speaking engagements that LifeWay arranges for him. Then, he also speaks at all the awareness (informational) meetings.

“I average about three states a week,” he said. He’s among the few people in the country who is a million-miler with Delta Airlines Sky Miles program.

How does Welch manage to be pastor of a growing church and be so involved with FAITH on the national level?

He answers simply, “This is the work the Lord has given me to do.” His church understands this.

“As surely as we send 16 missionary teams out overseas from this church, they see me going out to the mission field,” Welch said. “Without this church seeing this as a Kingdom work, I’d have had to have made a very hard choice long ago. I’d have had to make the choice between the church and this, but I didn’t have to do that. I think God has blessed this church because of this.”

Welch attributes the church’s willingness to let him do what he needs to do with FAITH to the fact that most everyone at First Baptist has a FAITH connection.

“It would be hard to be in this church and not have your life affected in some way by FAITH,” he said. “It’s hard to not see how FAITH has affected your kids, your husband, someone you work with, someone you like, somebody you know, somebody you’re dating. There are so many tentacles that are so widespread. It would hard not to be appreciative of how God has used it.”