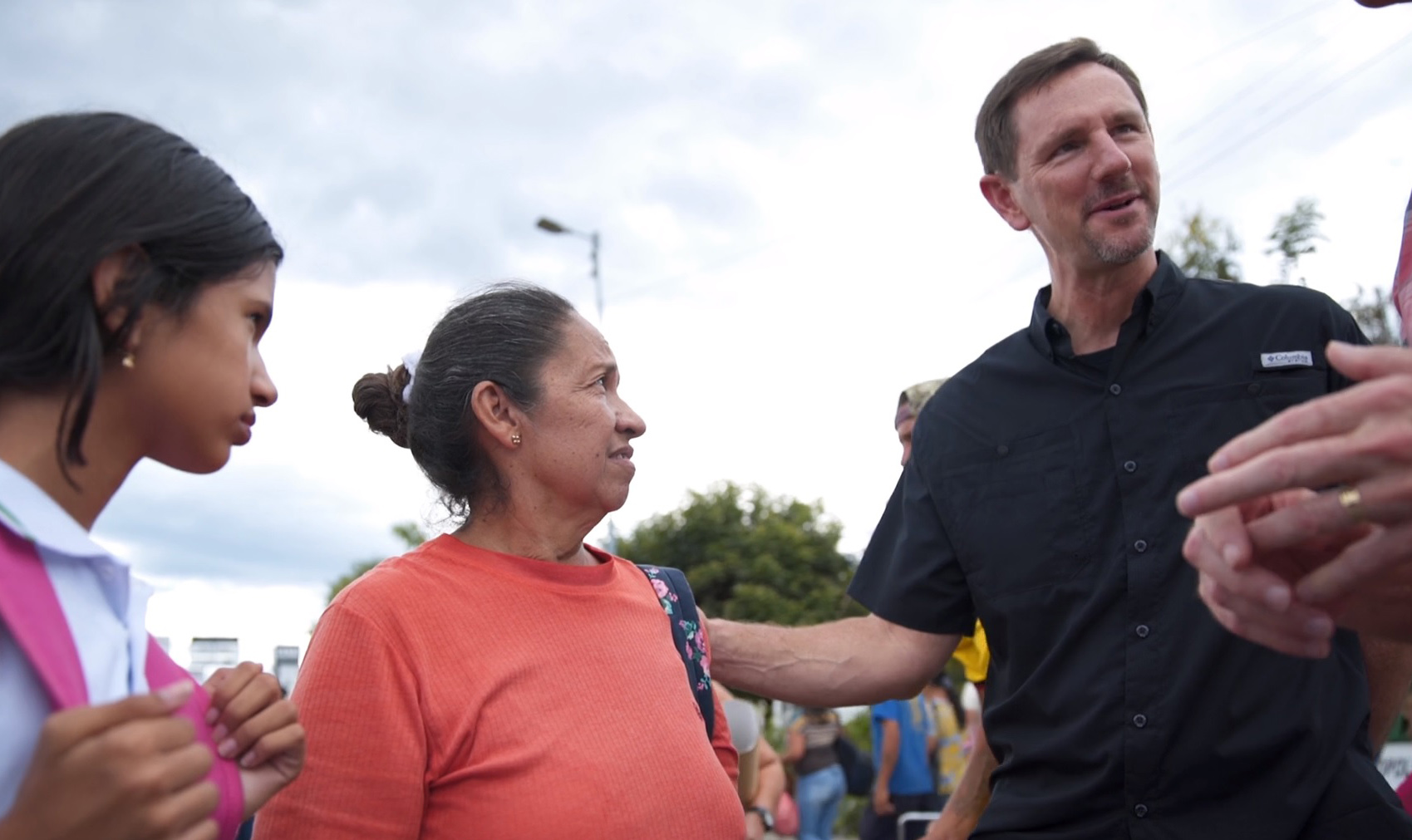 VENEZUELA (BP) — International Mission Board President Paul Chitwood ends today (May 13) a weeklong trip that included the Venezuelan border where he encouraged Baptists and area convention leaders ministering to refugees amid the nation’s collapsed economy and political strife.

“We’re thankful that Southern Baptists are here ministering to the needs of people who really are in a desperate situation,” Chitwood said in a video during his visit to Colombia. Chitwood witnessed scores of Venezuelans crossing into Colombia for food and medical care not available in Venezuela, where inflation is more than 1 million percent.

“I had the opportunity to visit with several people on this bridge, and we’ve heard some heartbreaking stories. People are heartbroken. They are traumatized from the situation that they’re facing,” Chitwood said.

“But thankfully,” he noted, “we’ve been able to pray with some, share the love of Christ, also see the very practical needs that our missionaries and Baptist Global Response are meeting here.”

Baptist Global Response (BGR) has responded nearly two years to the Venezuelan crisis that exacerbated under the presidency of Nicolás Maduro, whom opposition leader Juan Guaidó failed to topple in an April uprising.

“Thanks to our Southern Baptist Global Hunger Relief (GHR) initiative, we have been able to meet many critical food needs of our Venezuelan brothers and sisters,” BGR Executive Director Jeff Palmer told Baptist Press. The Baptist relief organization has provided nearly $200,000 worth of food, he said, and has helped Venezuelan Baptist partners minister to those suffering.

“It has been difficult for outsiders and foreigners from places like the USA to do much inside the country,” Palmer told BP. “But the local churches and believers have taken up the challenge to feed their fellow Venezuelans and do so in the name of Jesus. Southern Baptists have come alongside them and helped to provide the needed resources that in many cases is the difference between life and death.”

In Colombia, Chitwood met with IMB workers, Venezuelan and Colombian Baptist convention leaders and others. Chitwood estimated that as many as 4 million have fled Venezuela in search of relief.

Tommy Green, executive director-treasurer of the Florida Baptist Convention, cited statistics that about 100,000 Venezuelans have fled to the Southern state where Baptists have come to their aid.

“The refugees are moving in areas where the community presence of Venezuelans [is] located,” Green told BP. Florida Baptists are helping refugees with “assimilation, assistance in documentation, job placement, and meeting spiritual and physical needs as they establish their lives in Florida.”

Nearly 90 percent of families in Venezuela can’t buy the food they need to survive, National Public Radio said May 1, citing the latest Life Conditions National Survey conducted by college professors in the South American nation. According to the 2019 National Survey of Venezuelan Hospitals, released March 10 by Doctors for Health, 1,557 Venezuelans died in the past year from a lack of basic medical supplies and 79 died because of electrical outages.

Palmer is among many requesting prayer for the country.

“Pray that the downward spiral into poverty and hardship will cease,” Palmer said. “Pray that God would restore order and life can move back to normal. But also pray that our Venezuelan brothers and sisters in Christ would be bold during this time in making Him known.”

In an April 1 BP report, a Venezuelan Baptist pastor said the hardship has created fertile ground for the Gospel.

“We are in the most critical time in Venezuela,” the pastor said, “and it is the best opportunity for sharing the Gospel.”

A fellow pastor agreed. “It isn’t easy living in this situation that has come upon us,” he said. “Nevertheless, we have learned to be content whatever our situation. That doesn’t imply resignation. No. We need to move forward, trusting and hoping in God, but doing what each one, working from the trenches, should do to generate change.”