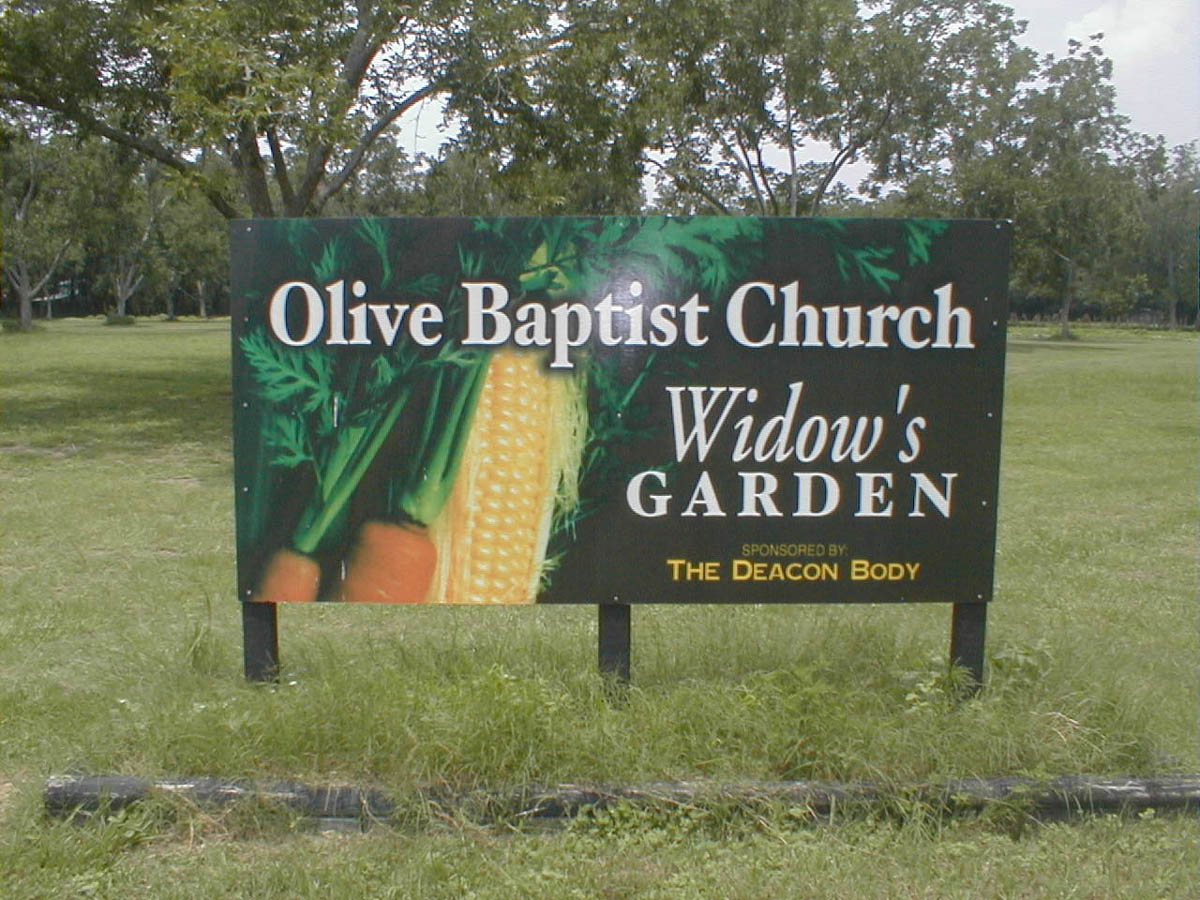 PENSACOLA, Fla. (BP)–The sounds of Davis Highway and the hectic pace of the city fade away when one enters two acres of cultivated farmland called the “Widow’s Garden.”

Nestled neatly between small orchards of pecan trees outside the walls of Olive Baptist Church in Pensacola, Fla., the garden opened in 1999 under the direction of then-chairman of deacons Randy Knepper, who credits God with prompting the idea from James 1:27: “Pure religion and undefiled before God the Father is this; to visit the fatherless and widows in their affliction and to keep himself unspotted from the world” (KJV).

“Our widows and seniors needed something, and we as deacons needed to take care of them,” Knepper said.

Knowing that most of the widows didn’t have the opportunity or ability to plant a garden of their own, Knepper approached the deacons at Olive with the idea of a churchwide project.

“I contacted Tom Farris, a fellow church member and an agriculture teacher at Ransom Middle School, to help me get started,” Knepper recounted. After testing the soil, spreading 600 pounds of fertilizer and breaking the ground, the soil was ready for sowing.

Sponsored by the deacons of Olive, the Widow’s Garden is open to all of the church’s widows and seniors. Each deacon is assigned a widow and given the responsibility of picking vegetables for them if they are unable to do so themselves.

“What was fun about this was hearing and seeing some of the widows picking [vegetables] themselves and then carrying them to other elderly people,” Knepper said.

Church member Loma West, 83, arrives almost daily to collect from the garden’s harvest. West not only picks, but also shells peas before delivering them to at least 20 other “old folks,” as she calls her peers.

The deacons support the garden financially, sometimes calling on donations from Sunday school classes, while volunteers cultivate and then harvest their efforts. Church member Harold Johnson, who works daily in the garden, recalled collecting $850 in one hour of Sunday school.

“We only needed $750.00 to purchase a tiller and some other garden equipment, but we walked away with a hundred extra [dollars] that allowed us to do more,” Johnson said. The garden also has been blessed with the addition of a new tractor complete with spreader and breaking plows.

An irrigation system allows the garden to be bountiful throughout the year. In the summer months the gardeners tend to a watermelon patch, cantaloupes, squash, tomatoes, cucumbers, okra, peas, butterbeans, peppers, eggplants, zucchini and even peanuts. And in the winter the garden supplies pecans, collards, turnips, broccoli, cabbage, red potatoes and green onions.

Another vital volunteer to the garden is church member Harry Hassebrock, who owns a nursery in Cantonment and donates all of the fertilizer and plants that are used.

Jean Rea, Olive’s social service director, leads a widowed person’s support group at Olive. Being a widow herself, Rea said the widows of a church often tend to be forgotten.

“The Widow’s Garden has made sort of a camaraderie among us. It makes our widows and seniors feel special,” Rea said. “One of the interesting things about the garden is not the actual food, but the entertainment and memories that it brings back. It is good therapy for everyone.”
–30–
(BP) photos posted in the BP Photo Library at http://www.bpnews.net. Photo titles: 2 ACRES OF LOVE and DAILY GROWTH.