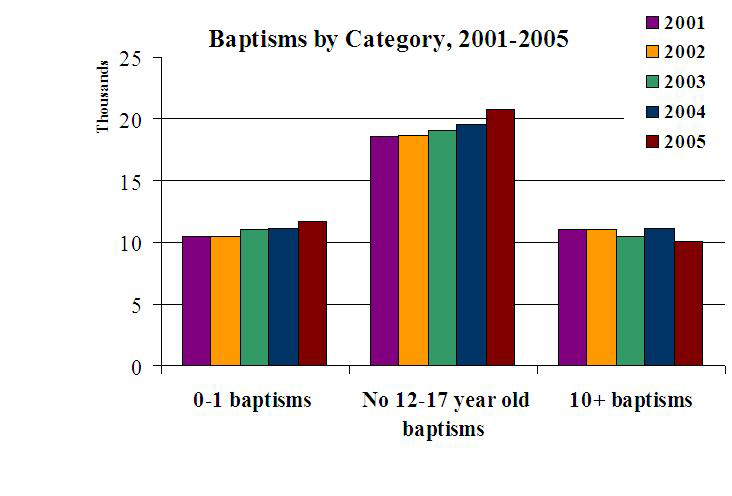 ALPHARETTA, Ga. (BP)–There’s been a lot of talk recently about baptisms — how to have more, who we should baptize, and where these baptisms should take place. It’s an important dialogue. Yet, despite all the talk, studies show we have fewer and fewer baptisms each year to discuss. That’s disturbing.

From 2004 to 2005, every baptism category, by age, went down — except one. The one category that went up? Preschoolers — those under five years of age. That makes me nervous. Though I am not one to say that a five year old cannot trust Christ, it’s hard to see the march toward infant baptism as good news.

Seeing these trends graphed out over time should cause us great concern.

According to former SBC President Bobby Welch, only 40 percent of SBC converts come from the ranks of the unchurched. He went on to say, “What that means is that we’re not reaching the pagan pool. … We’re just rearranging the furniture inside the church.” Welch’s comments line up well with a study the North American Mission Board’s Research Team did. According to a study of adults baptized in 1993, nearly 20 percent of SBC baptisms came from those who already were baptized by immersion in an SBC church. Another 40 percent came from people who had been sprinkled at an earlier time, mostly as children. Only 40 percent of people baptized in the year of our study considered their baptism to be a result of conversion. (You can download this study at www.namb.net/cmr).

The downward trend in baptisms has been noted by the secular press as well. USA Today recently wrote about the decline of the “ritual of baptism.” I read the article and immediately thought about all those compromised churches that quit baptizing. But then I saw it. The story was talking about us! USA Today explained, “Denominations that baptize only believers — older kids and adults who profess change of heart and want to witness this with an outward sign — also are seeing a decline.”

The baptismal decline has been evident since the 1950s, and the accompanying graph tells the story. With the exception of a bump in the 1970s during the Jesus movement (a phenomena which was frequently opposed in SBC life), baptisms have plateaued or trended slightly downward. The last few years indicate trouble ahead. Though we’ve had a renewed focus on conversion growth, and availability of evangelism resources and training, we’re reaching fewer people. All of this while the population around us is growing — and growing fast (as the 300 millionth American, who arrived on Nov. 17 at 7:46 a.m., can attest).

We can bemoan declining baptisms for another year or we can ask ourselves several hard questions. Why do some churches reach people and others do not? What can we learn from them? What passion have we lost? What will it take to stir the waters of baptism once again?

It won’t happen through tools and techniques — as useful as those are, but as God moves in the lives of His people and in the lives of those we encounter. We need a renewed passion for God, a burden for the lost, sensitivity to daily opportunities, and obedient and willing hearts. When that happens, baptisms will no longer be a disturbing trend, but a dynamic testimony.
–30–
Ed Stetzer is NAMB’s missiologist and senior director of NAMB’s Center for Missional Research. To download graphs from this and other studies, or to subscribe to the monthly newsletter, visit www.namb.net/cmr.