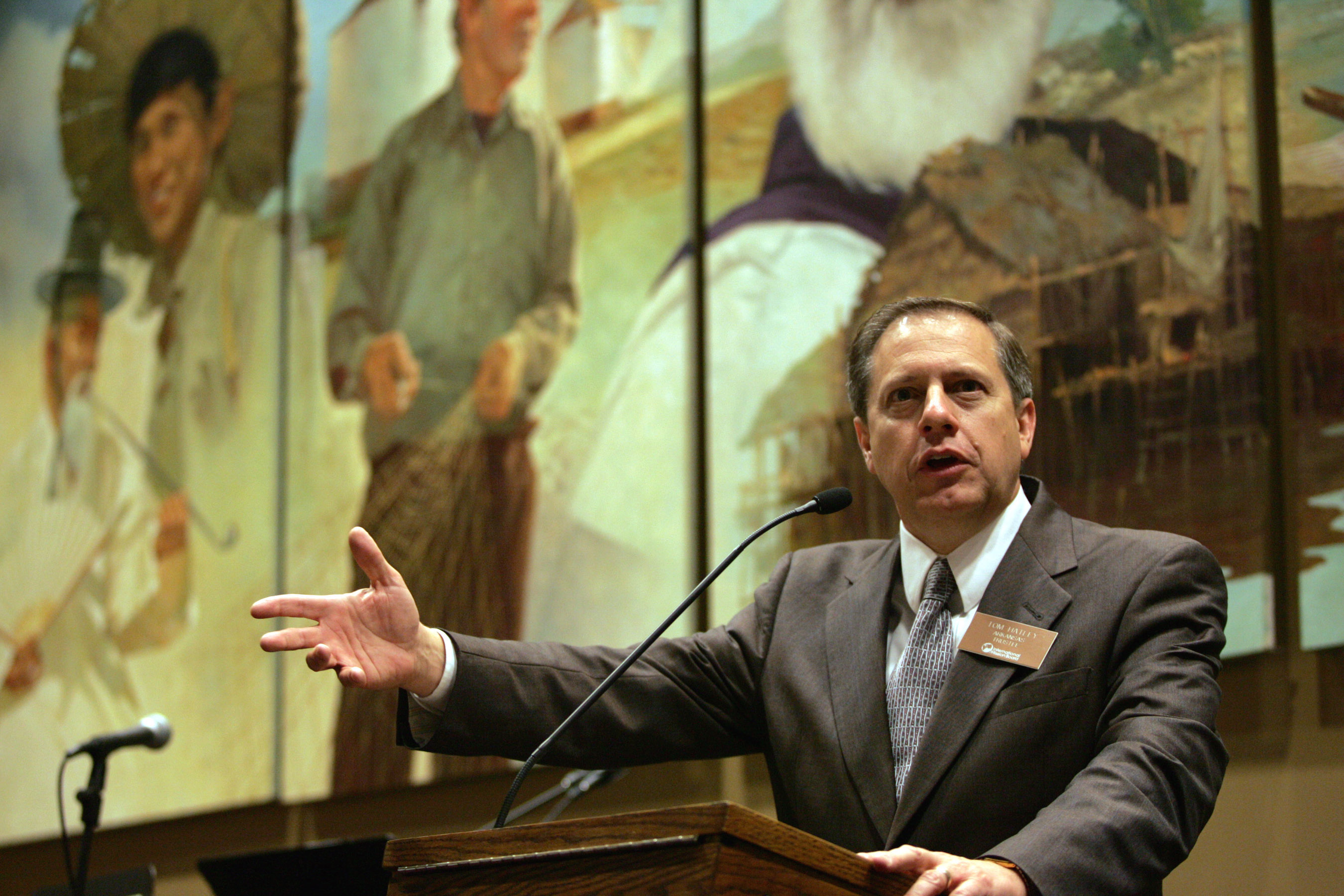 RICHMOND,Va. (BP)–Help is desperately needed in places where churches are multiplying more rapidly than leaders can be trained, International Mission Board trustees were told during a Sept. 14-15 meeting in Richmond, Va.

The trustees also received 10 recommendations to clarify the methodology and purpose of overseas work, strengthen the vision for reaching a lost world and improve partnership with the six Southern Baptist seminaries.

In addition to appointing 45 new missionaries for overseas service, trustees heard a report from President Jerry Rankin on his just-completed three-month sabbatical

A CRY FOR HELP

Hatley, pastor of Immanuel Baptist Church in Rogers, Ark., reported on a recent overseas trip during which he met the leader of a large movement of house churches that had been experiencing exponential growth.

“He is instructing his people that, for the next two years, they are not to allow the churches to more than double each year,” Hatley said. “The reason for the slowdown is that they were growing so quickly and they could not train leaders fast enough to adequately staff the churches being formed. Without training for leaders, there was a danger that the movement would become weak and open to damaging strains of theological thought.

“The look of concern and frustration in that pastor’s eyes was painful to me,” Hatley said. “It was a cry for help that demands our immediate attention. It is a logjam that could threaten the future of many of our church-planting movements.”

Regional leaders and stateside staff are addressing the need, Hatley said, but he challenged trustees to “find a way to bring leadership to those groups that are experiencing exponential growth.”

“What is needed is exponential leadership training,” he said. “When we train leaders, we must train them to recruit and train other leaders and continue that pattern as long as is needed.”

Hatley also reported on an Aug. 13 meeting between IMB staff and trustee leaders and presidents and missions professors from the six Southern Baptist seminaries and Mid-America Baptist Theological Seminary in Memphis, Tenn.

The dialogue, held in Atlanta, gave seminary leaders an opportunity to share their perspectives about IMB strategies and offer ideas about ways closer partnership could enhance the ministries of both the IMB and the seminaries. The all-day meeting was an outgrowth of concerns expressed last year by Keith Eitel, a missions professor at Southeastern Baptist Theological Seminary in Wake Forest, N.C., and Paige Patterson, president of Southwestern Baptist Theological Seminary in Fort Worth, Texas.

Eitel had contended that “pervasive” theological error is reflected in the board’s approach to strategic planning, in partnerships with other Great Commission Christians, in a perceived lessening of theological training requirements for new missionaries and in the role of women serving overseas as strategy coordinators. A letter of reply from Rankin described the criticisms as “unfounded” and rejected the implication that IMB trustees had “overseen and embraced a failure that represents an aberrant theology.”

“The purpose was to discuss ideas and concerns about work on the field, how we can make it better and more theologically sound and how we can more frequently involve our seminaries,” he said. “The results were even greater than I had expected. Clarity was given to many issues, very constructive ideas were offered and were received with grace.

“Everyone exhibited the highest levels of Christian deportment and mutual respect, yet no one held back. There was an openness and freedom that allowed each concern to be expressed. It was obvious that everyone in the room had the same heart for spreading the Gospel of our Lord.”

Barrett presented the trustees with a set of 10 recommendations that were being referred to the appropriate trustee committees for action in consultation with staff.

Among the recommendations were calls to:

— review the training, number of required hours from the seminaries and the particular courses required for missionaries who will serve as strategy coordinators.

— clarify the boundaries and levels of cooperation with “Great Commission Christian” groups.

— continue to evaluate missionary training on subjects such as church-planting movements, ecclesiology and the role of women in ministry.

— revisit and clarify the definition of a local church.

Rankin reported to trustees on his recent three-month sabbatical, during which he rested, visited with children and grandchildren serving overseas and worked on writing projects.

The time off included a visit to the city in Indonesia where he and his wife, Bobbye, served their first church-planting assignment as IMB missionaries more than 25 years ago.

The city has grown to about 2 million people, and the increased influence of Islam is very evident, Rankin said.

“I guess the most emotional part of it was just being there and thinking, ‘I wish we could have done more,'” he said. “We were in the midst of what is still one of the largest unreached people groups in the world, but we ignored them, looking for pockets of response,” Rankin said. “And now we’re sending out missionaries with a vision and strategies to impact that people group.

“I am so grateful for where God has led us, and that we’ve embraced some new, challenging strategies, that He’s given us a global vision,” Rankin said. “I wish we had been equipped and knew what missionaries know now about how to impact unreached people groups.

“I see how God is working throughout our world. We must continue to be focused on being obedient to Him and never lose sight of that vision of all the peoples of the world knowing our Lord Jesus Christ.”

Vast multitudes live in spiritual bondage, with no idea of God’s love or the price He has paid for their freedom, Rankin told 45 new missionaries who were appointed for long-term service during a Sept. 15 ceremony at First Baptist Church in Roanoke, Va.

“Everywhere people are in spiritual bondage and darkness because they do not know the light of the world,” Rankin said. “God has chosen you to carry that light, to set them free.

“I’m telling you, there is no greater thrill than to have the opportunity of being the first one to tell someone about Jesus. You cannot imagine the thrill of seeing their eyes begin to sparkle and the light of understanding begin to dawn that there is a God who loves them and has given His Son to save them from sin.

“It’s a message that the world is waiting to hear.”

Once a person understands how lost the world is, it’s almost impossible not to respond, said one young man who will serve in Western Europe with his wife and their two young children.

“For years I was told that there is one way to God: Jesus Christ,” he said. “It took a long time, but once this reality set in, I was utterly overwhelmed by the incredible lostness of the world. It seemed like a powerful disease for which I was one of the few who knew the cure. How could I not go? How could I tell God no?”

His wife said her heart broke during an overseas trip as she watched a young mother gently fold her daughter’s hands together and show her how to bow before the idol in front of them.

She recalled: “As I watched, the Lord of Lords said to me, ‘This one I want to bow before me. Go! Reach out in My name to those in darkness.'”
–30–
The next trustee meeting is scheduled for Nov. 15-17 in Oklahoma City, with a missionary appointment service Nov. 16 at First Southern Baptist Church in Del City.