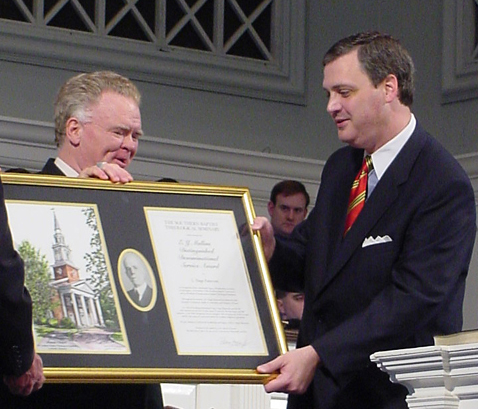 Southern Baptist Theological Seminary honored Paige Patterson with the E.Y. Mullins Distinguished Denominational Service Award for his “remarkable legacy of leadership” among Southern Baptists. Patterson, president of Southeastern Baptist Theological Seminary since 1992, played a critical role during the convention’s conservative resurgence, which began in the late 1970s. He served as SBC president from 1998-2000.

Southern Seminary President R. Albert Mohler Jr. made the presentation to Patterson during a chapel service.

“When the history of the Southern Baptist Convention — and beyond that the history of Christianity in America in the last half century is written — if justice is done, Dr. Paige Patterson will be recognized as one of those who most sacrificially, most faithfully, and by God’s grace most effectively offered leadership when there was so little leadership in the land,” Mohler said.

Southern Seminary’s trustees, in their April 2-4 meeting, voted unanimously to give the E.Y. Mullins Award to Patterson. Mohler said the seminary was expressing its “appreciation and thanksgiving to God for the historic role [Patterson] played in putting his life and ministry on the line for the cause of truth. In a very real sense, the fact that we are here today, celebrating what God has done, is a testimony to God’s faithfulness demonstrated to us in one of his servants, Paige Patterson.”

Patterson was on campus to take part in a one-day preaching seminar titled, “Power in the Pulpit,” April 2.

“I am amazed at the grace of God that he extends to us in so many, many ways,” Patterson told the chapel audience. “I thank the Lord for what God has done right here on this campus, as he continues to bring a host of tomorrow’s pastors and missionaries and evangelists to this place.”

The E.Y. Mullins Award is named in honor of the fourth president of the seminary, who served from 1899 until his death in 1928.

Mohler said Patterson’s leadership was critical in helping the SBC recover the “truths that are so precious to us” and the “platform of doctrine and eternal truth on which we stand.”

Before becoming president of Southeastern Seminary, Patterson served as president of Criswell College in Dallas from 1975-92. During that time he also served as associate pastor of First Baptist Church, Dallas. From 1970-75 he was pastor of First Baptist Church, Fayetteville, Ark. Patterson received his bachelor’s degree from Hardin-Simmons University in Abilene, Texas, in 1965. He graduated from New Orleans Baptist Theological Seminary in 1968 with a master of theology degree and in 1973 with a doctorate in theology.

Following the presentation of the E.Y. Mullins Award, Patterson referenced 1 Corinthians 15 to tell those in attendance that a reward awaits them in heaven.

“My beloved brethren, be steadfast [and] immovable — always abounding in the work of the Lord, knowing that your labor is not in vain in the Lord,” he said, quoting verse 58. “What a wonderful word from God.”

Patterson also was on campus to participate in the seminary’s “Great Commission Week,” a weeklong focus on the need for missionaries and church planters. Al Jackson, pastor of Lakeview Baptist Church in Auburn, Ala., was the week’s other chapel speaker.

Thom Rainer, dean of the Billy Graham School, recognized Highview Baptist Church of Louisville and Little Flock Baptist Church of Shepherdsville, Ky., for their emphasis on missions. It is the first time that any Louisville-area church has ranked in the top 3 percent.

“They have a mission mindset,” Rainer said. “They give generously to missions, they plant churches and their whole attitude is that of being obedient to the Great Commission.”

Jackson said every student should “have a passion in his or her heart to take the gospel to the nations. Why? Simply because God’s desire and God’s passion is that all the nations know him and worship him and give him the glory that he so justly deserves.”

He noted that those who are not called to the mission field are nevertheless called to support missionaries through their prayers and offerings.

“Last year our people gave $105 million to the Lottie Moon Christmas Offering — the largest missionary offering in the history of Christendom,” Jackson said. “But there are 15 million of us (Southern Baptists), and that comes down to about $7 per Baptist for this missionary offering. Let’s not pat ourselves too loudly and too strongly on the back.”

Jackson told the story of a needy elderly woman at a church where he was pastor. Several members took up a collection, and Jackson was put in charge of giving the woman a $100 bill. Jackson gave the woman the money, but she turned around and gave it to the Lottie Moon Christmas Offering.

“That’s what it’s going to take to declare his glory among the nations — his marvelous deeds among all the peoples,” Jackson said.

Chapel messages can be heard on the seminary’s website at www.sbts.edu/news/audio/speakers_chapel.html
–30–
(BP) photos posted in the BP Photo Library at http://www.bpnews.net. Photo titles: LEGACY OF LEADERSHIP and PATTERSON AT SBTS.