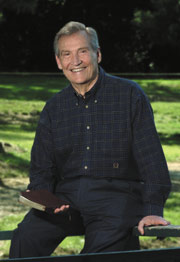 NASHVILLE, Tenn. (BP)–Pastor and teacher Adrian Rogers, founder of “Love Worth Finding,” was inducted into the National Religious Broadcasters Hall of Fame during their annual convention at the Opryland Hotel in Nashville, Tenn., Feb. 10.

Rogers is pastor of Bellevue Baptist Church in Cordova, Tenn., near Memphis, which has grown from 9,000 members in 1972 to more than 28,000 members today. He developed Love Worth Finding, with one-hour television broadcasts and 30-minute radio broadcasts of his preaching, in 1987 after requests for tapes of his sermons grew beyond management.

Love Worth Finding can now been seen and heard worldwide on more than 14,000 television outlets and 2,000 radio stations across America and in more than 120 countries. The program’s Spanish broadcasts reach nearly all of Latin America — one of the fastest-growing areas in Love Worth Finding’s programming.

Rogers served as president of the Southern Baptist Convention from 1979-80 and again from 1986-88, and he has preached in overseas crusades in Taiwan, South Korea, Israel, Russia, Romania and Central and South America. He has been the keynote speaker for such meetings as Washington for Jesus, the National Association of Evangelicals and the National Religious Broadcasters.

“I believe God wants us to proclaim the message of salvation in the power of the Holy Spirit by every means possible, especially through radio and television,” Rogers said on the Love Worth Finding website, www.lwf.org.

Also honored by the National Religious Broadcasters Feb. 10 were:

— Bill Bright, founder of Campus Crusade for Christ, with the Board of Directors’ Award.

— the late W.A. Criswell, former pastor of First Baptist Church in Dallas, with the Milestone Award.