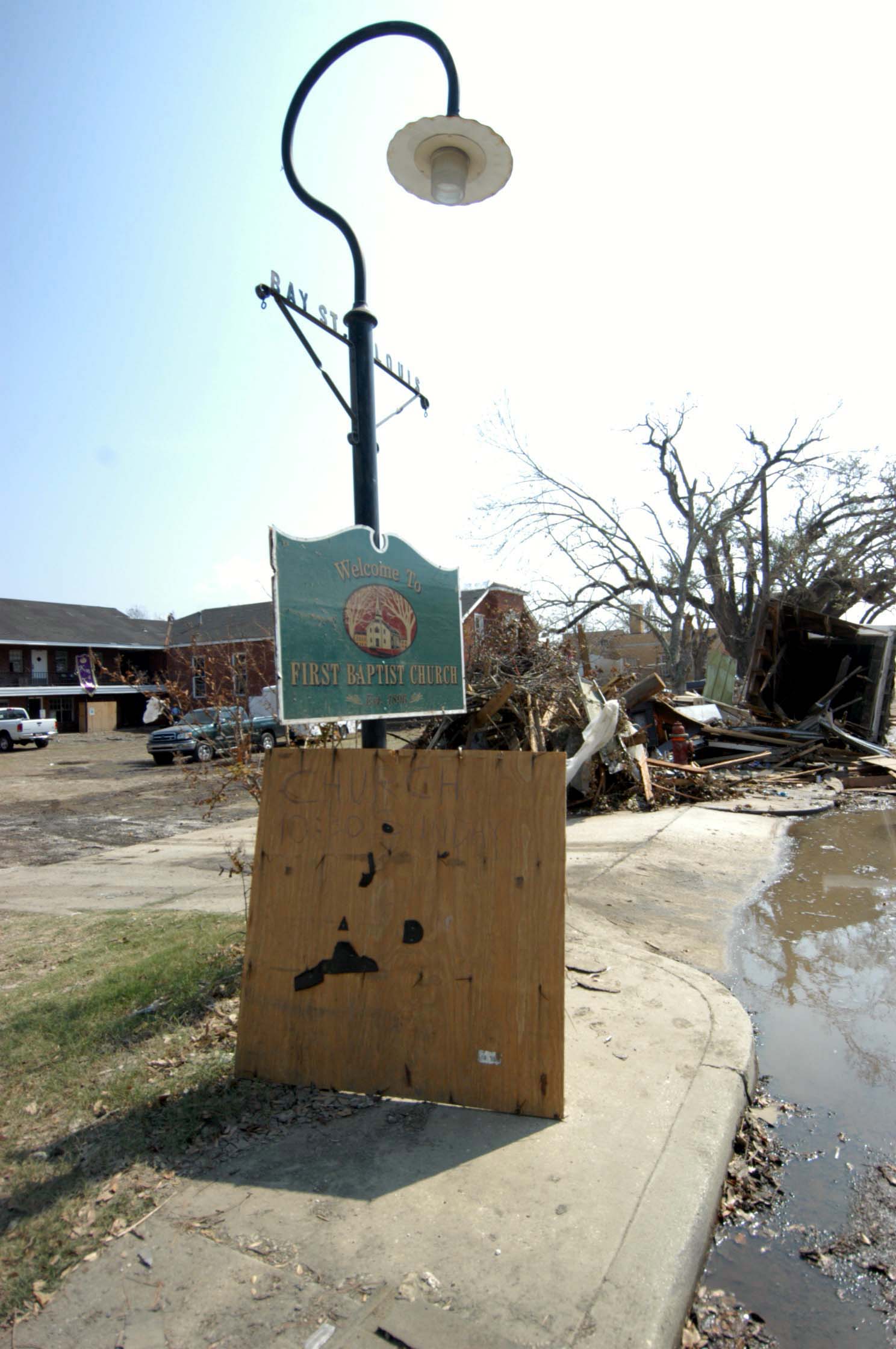 To date, nearly $21 million in monetary donations has been received by the Mississippi Baptist Convention from across the country and abroad for relief and ministry efforts after the costliest natural disaster and one of the five deadliest hurricanes in U.S. history.

After making landfall briefly in Louisiana, Katrina’s eyewall passed over Bay St. Louis and Waveland, Miss., as a Category 3 hurricane with sustained winds of 120 mph on the morning of Aug. 29, 2005.

The resulting 26-foot storm surge penetrated six miles inland and in many areas moved 12 miles along bays and rivers — the highest and most extensive in the United States in documented history. Mississippi officials calculated that 90 percent of the structures within a half-mile of the coastline were completely demolished. On U.S. Highway 90 along the coastline, two major bridges were destroyed.

Statewide, 11 tornadoes were recorded, and the Mississippi Emergency Management Agency estimated that more than 900,000 people were without power. Total property damage from Katrina was estimated at $81 billion. In Mississippi alone, the storm left 238 people dead and 67 missing.

Then came the $21 million flow of compassion for the devastation Mississippians were facing. From the gifts, $11,094,296.48 now has been expended for church rebuilds; $7,308,701.88 for community rebuilds; $1,836,941.63 for salary support to pastors and staff to ease financial shortfalls in the months following the storm; $265,456.03 toward response to ministers (emergency monies given immediately after the storm as well as ministers’ home repairs); and $460,693 toward feeding and miscellaneous.

“We lost some good folks who moved,” said Paul Crowley, who will celebrate his 15th anniversary as pastor in October. “This area was still far enough north that most of our damage was wind damage, but some folks didn’t want to go through this kind of thing again.”

“We didn’t miss a service,” Crowley said. “This [the education] building had to be completely redone. The gym was still standing and we were able to use it. That Wednesday after the storm, my oldest son and I came back from Tupelo — we’d been up there during the storm — and that night he, I and two church members stood outside the sanctuary and had church services. It was basically, ‘Thank You, Lord, that we are all in one piece!'”

The next Sunday the church had an early service. The church’s insurance “did right,” in Crowley’s words, while contributions helped meet the deductibles.

“The first three years after the storm we housed over 4,000 volunteers who came in. We started with chainsaws. North Highland Church from Hueytown, Ala., has been down many times, helping us and helping others.

“For the first two or three years, it was all about Katrina, all about the recovery,” Crowley recounted. “Every conversation with someone would turn to the storm — where they were, what had happened to them. In the last year and a half or two years, Katrina hasn’t dominated the conversation, and it’s given us a chance to get back to church, to seeking and saving the lost. The focus has shifted back. It’s hard for me to go back and compare where we were before Katrina…. It’s hard to think about what it was like before August of 2005.

“Katrina changed me,” Crowley continued. “It changed all of us. There are people in our church who are different now. Not necessarily good, not necessarily bad. It just impacted us all. Out here, it’s easy to forget it happened, but if you drive along the beach, you know things have changed.”

Bay St. Louis, in many ways, was “ground zero” for Katrina, but a stroll around the downtown area shows significant rebuilding and restoration.

Al Green is pastor of First Baptist Church in Bay St. Louis. “My daddy had just come through one bout with cancer,” Green recounted, “and was scheduled to go back in the hospital on the day Katrina hit, so I went to his home in Lumberton and planned to stay with him at the hospital. They called Sunday afternoon and said they weren’t letting anyone in the hospital, so I rode it out with him in Lumberton. I followed the chainsaw teams back in Tuesday.”

First Baptist’s sanctuary lost its roof and all the windows, and the cinderblock pilings supporting the building were twisted and leaning. The building, which was one of the chapels at the Centreville Army Base, had been purchased in 1947 for a little over $1,200. It had been taken apart at the site and brought to Bay St. Louis, re-assembled and bricked.

“We had an architect come look under the building, and he told us, ‘I can’t tell you it can’t be fixed, but it will cost thousands of dollars for the reports needed to let you know if it could be repaired.’ So we voted just to tear it down,” Green said. The church has built a new sanctuary, with more construction planned.

“Before the storm we were in two services,” Green said, “so by rebuilding we were able to get in one service. We were averaging about 265-270 in worship before Katrina, and we probably had 230 this past Sunday — but probably only about 150 of that number were attending church before Katrina. We’ve gotten a lot of new people in, a lot that came in during the disaster rebuild.”

Asked about the well-being of the church members, Green said, “We have a new normal. In a lot of ways, that’s better than the old normal. There hasn’t been that much of a panic over the oil spill that there might’ve been prior to Katrina. We’ve learned that there is truth in the Word of God, that prayer can change things.”

Green stated, as a testimony to God’s faithfulness, that the church was “giving more today than it was before Katrina. We had to borrow money to build the sanctuary, but if it weren’t for that, we’d be running ahead of budget.”
–30–
Tony Martin is associate editor of the Baptist Record, newsjournal of the Mississippi Baptist Convention.