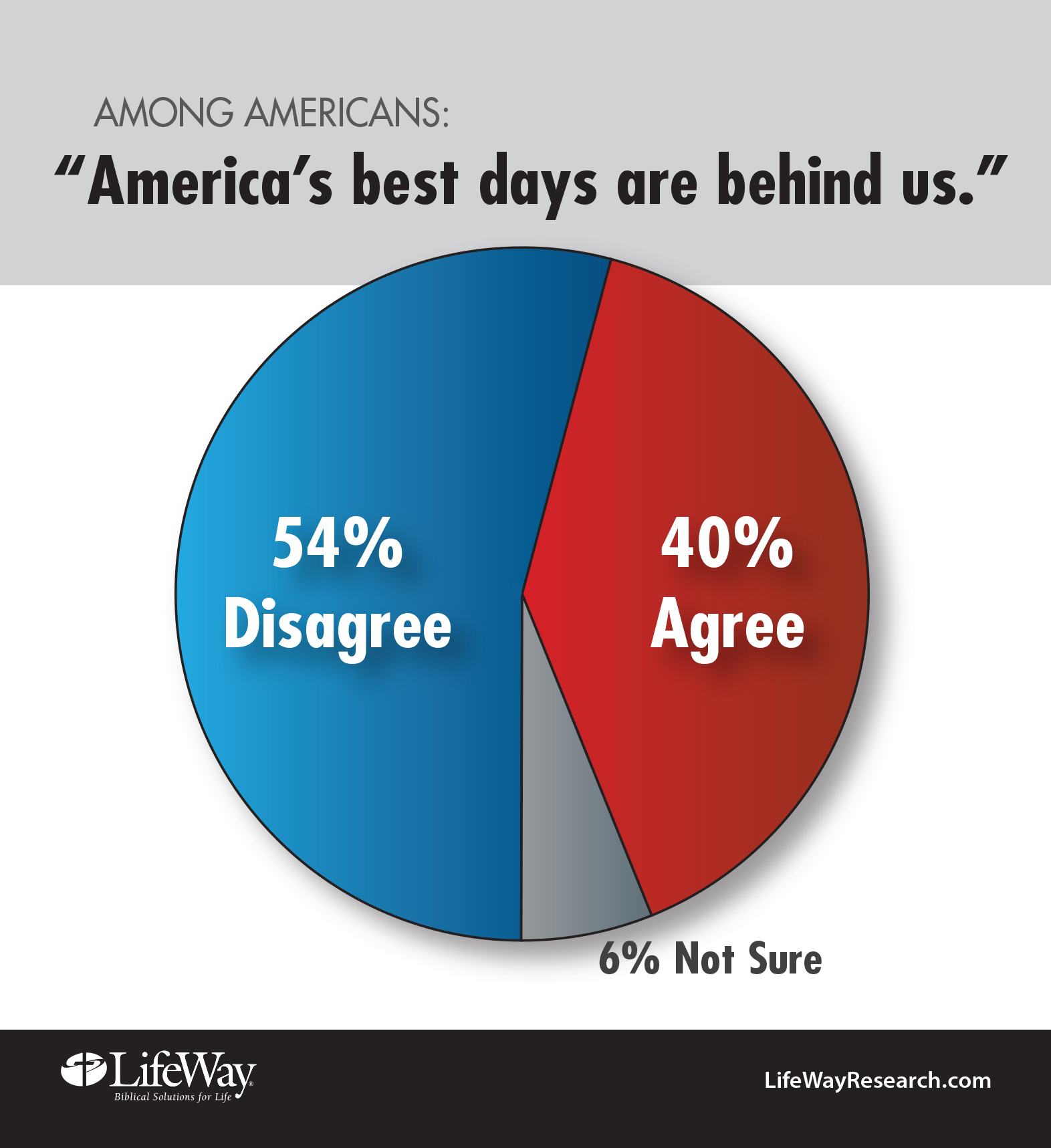 NASHVILLE (BP) — In a nation founded on religious liberty, most Americans believe God has a special relationship with the United States, and they’re optimistic the best is yet to come.

Despite headlines lamenting the global decline of the United States since the Cold War, 54 percent of Americans believe the nation is on the upswing, according to a survey by LifeWay Research released July 1.

Only 4 in 10 think “America’s best days are behind us,” LifeWay Research reported from data in a September 2014 survey.

Though the U.S. Constitution makes no mention of God, 53 percent of Americans say they believe God and the nation have a special relationship, a concept stretching back to Pilgrim days. Even a third of atheists, agnostics and those with no religious preference believe America has a special relationship with God.

“‘God Bless America’ is more than a song or a prayer for many Americans,” said Ed Stetzer, executive director of LifeWay Research. “It is a belief that God has blessed America beyond what is typical for nations throughout history. I am sure that would spawn many theological conversations” but it’s important to note a majority of Americans “think God has a special relationship with their country.”

Both ends of the political spectrum — from President Obama to the Republican Party platform — have touted American exceptionalism, the belief that the United States plays a unique role in human history. For some, the concept includes the idea of a special relationship with God, although beliefs about the nature of the relationship vary.

“Some Christians view America as an archetype of biblical Israel, chosen and uniquely blessed by God,” Stetzer said. “That’s why Christians sometimes speak of God ‘healing our land,’ when most theologians say this American ‘land’ is not in the same category as the ‘land’ of biblical Israel.”

Americans have emphatic opinions on the matter, with 35 percent strongly agreeing God has a special relationship with the United States and 25 percent strongly disagreeing. Smaller segments say they somewhat agree (19 percent) or somewhat disagree (13 percent).

Protestants are more pessimistic about the nation’s future than Catholics, with 43 percent of Protestants agreeing America is past its prime, compared to 34 percent of Catholics.

Women, meanwhile, are significantly more likely than men to believe that God has a special relationship with the United States. While 49 percent of men have that view, the number rises to 58 percent for women.

Nearly two-thirds (63 percent) of Americans ages 45-54 think God has a special relationship with the United States, a belief shared by 48 percent of those 18-44.

Belief in a special relationship also is high among:

— African Americans, at 62 percent, compared to whites at 51 percent.

— Southerners, at 59 percent, compared to 49 percent of Midwesterners and 50 percent of Westerners.

Evangelical Christians are the most likely to believe in a special relationship, with 67 percent agreeing. Among evangelicals 45 and older, the share soars to 71 percent.

“Americans, particularly those in more religious segments or geography, are most likely to believe in this special relationship,” Stetzer said. “But, considering the history of the nation, from Manifest Destiny to Ronald Reagan’s ‘City on a Hill’ speech, it’s not surprising this long-held theme continues today.”

Methodology: The phone survey of Americans was conducted Sept. 19-28, 2014. The calling utilized Random Digit Dialing. Sixty percent of completes were among landlines and 40 percent among cellphones. Maximum quotas and slight weights were used for gender, region, age, ethnicity and education to more accurately reflect the population. The completed sample is 1,000 surveys. The sample provides 95 percent confidence that the sampling error does not exceed plus or minus 3.4 percent. Margins of error are higher in subgroups. Those labeled evangelicals consider themselves “a born again, evangelical or fundamentalist Christian.”

Missions in Haiti more precarious after kidnapping of Americans

‘The Jesus Music,’ documentary aims to offer audiences ‘a rush of hope’

Census reveals future for Hispanics, Latinos in the SBC

For Christians left in Afghanistan, extreme secrecy only option