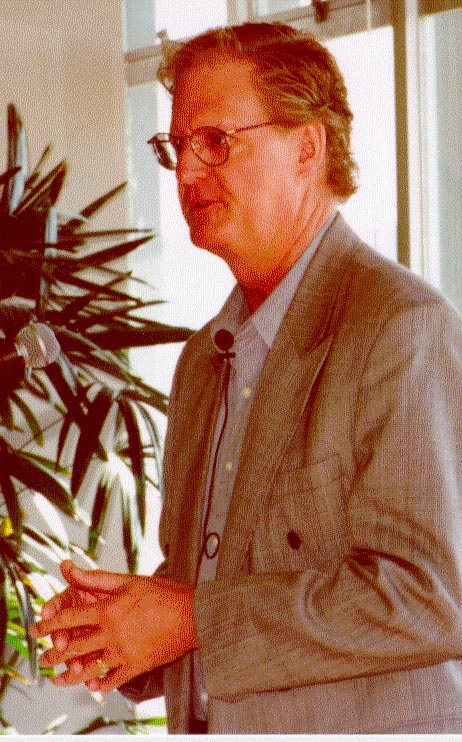 MILL VALLEY, Calif. (BP)–Contemporary Christian music may not have started in the church, but its profound impact on the church is undeniable, said John Styll, president of Nashville-based CCM Communications and chairman-elect of the Gospel Music Association.

“In the annals of sacred music history, this type of expression is unprecedented in its growth and popularity,” said Styll, guest speaker for the new Worship and Music Lectureship series at Golden Gate Baptist Theological Seminary April 5. The event was hosted by The Bill and Pat Dixon School of Church Music at the Mill Valley, Calif., seminary.

— The monophonic music of the early church and then the more complex musical forms of the first 1,500 years of church history. “As composers began experimenting with complex musical forms, it began to leave the congregations as spectators rather than participants as trained choirs took over.”

— The simpler music following the Reformation that allowed congregations to sing again. “This returned to the notion of uncomplicated music that even non-musicians could participate in. This gave rise to many of the wonderful hymns and congregational singing.”

— The “gospel music” of the last two centuries. This third stream, “[which] began in camp meetings and revival services, has become a multi-million-dollar industry,” developing into an entertainment medium with parallels to the secular music industry.

While the music executive expressed discomfort with the term “industry” as it relates to contemporary Christian music, he nevertheless noted its huge impact on the church. Part of the dramatic impact comes from the genre’s origins: “It didn’t start in the church. [It] started as a countercultural response to the counterculture of the ’60s.”

An observer of that early movement himself, Styll recalled that many of the young people who were rebelling against the establishment structures of the 1960s found something they hadn’t counted on: a relationship with Jesus. By 1970, there was a “full-scale revival taking place in the counterculture. It became known as the Jesus Movement.”

The movement made the cover of TIME magazine, spawned at least two Broadway musicals and created an avenue for new songs about Jesus on the secular music pop charts.

“With music being a big a part of the counterculture, it was only natural that the newfound faith of young people would find musical expression,” Styll said. “So they just wrote and played the popular rock music they knew, giving it lyrical content about Jesus.”

What began as a movement from “the long-haired, barefoot worshipers” eventually became an industry, with most large contemporary Christian music labels now owned by mainstream entertainment companies, Styll said.

Total sales in the CCM industry have grown from $83 million in the mid-1980s to nearly $700 million last year, with 44 million units sold last year, half of which were purchased in mainstream music outlets.

CCM is not a style of music in and of itself, Styll said, but is “derivative of other styles [and] at this point virtually any style of music that you can think of has a Christian counterpart.” He noted contemporary Christian music is the only category in the Grammy nomination process defined by lyrical content.

While there are many styles of CCM, contemporary/pop is the most popular, but the “praise and worship” category is quickly growing. The “Songs 4 Worship” recently released by TIME-Life Music is the most successful “rollout” in the company’s history, with a half-million sold in the first 90 days.

New praise choruses, from all around the world, have flooded the market, with hundreds of new songs being published every year. A company that provides licenses for churches wanting to publish copyrighted lyrics has more than 240,000 songs in its database.

The music that is today called “modern worship” is a mix of contemporary Christian music and praise choruses, Styll said. “Today there are worship bands … using extremely contemporary musical idioms but worship-oriented lyrics. Worship music [is] now popular and commercial.”

Styll said contemporary worship is the biggest issue facing the church today worldwide and he expects it to change again with the generations.

“What contemporary Christian music has done is make the worship experience more relevant and therefore more meaningful to a new generation,” he said. “But the danger is, contemporary music is very performance-oriented. The line between worship and entertainment can very easily get blurred. Music in worship should draw our attention toward God, but contemporary music often draws attention to itself.”

Styll warned that congregations can take on a consumer mentality, evaluating whether worship was “good” today based on “how well the performances pleased us.”

Things could change in the future, Styll said. Emerging generations of young people already may be rejecting some elements of contemporary worship. Styll noted a recent interdenominational survey of people in their 20s revealed their “deepest desire is to have a genuine encounter with God” and they seek to “recover depth and substance” in worship.

“The demand for depth and substance speaks to us of the need to find those biblical and transcultural principles of worship that have endured through 2000 years of history and to incarnate deep principles into a new style demanded by the cultural patterns of a postmodern world,” Styll said. “If we can achieve this, then the new generation will have taken us beyond the contemporary worship of yesterday into the contemporary worship of tomorrow.”
–30–
(BP) photo posted in the BP Photo Library at http://www.bpnews.net. Photo title: MUSIC’S IMPACT.