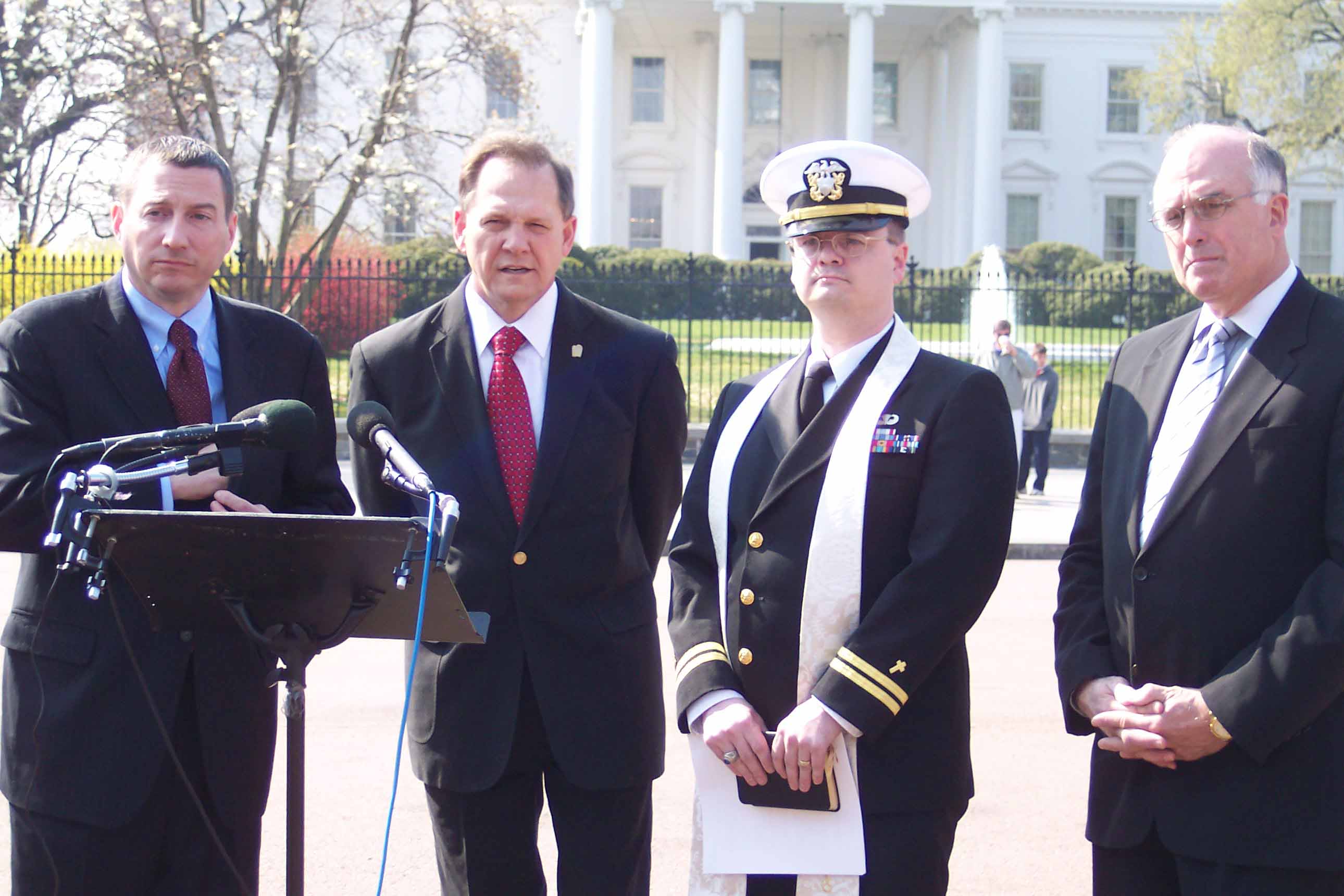 NORFOLK, Va. (BP)–While the Navy has rescinded a regulation that restricted chaplains from conducting public worship outside of Sunday chapels, an evangelical claims the military branch is firing him for violating that guideline.

A chaplain at the Naval Air Station in Norfolk, Va., Lt. Gordon Klingenschmitt has been ordered out of the Navy as of Jan. 31, cutting short a military career that began 15 years ago as a missile officer in the Air Force.

“We’re being evicted from our home and I have no job,” Klingenschmitt, a graduate of the Air Force Academy, told Baptist Press. “We’re in God’s hands. We’re accepting speaking invitations and will pursue whatever opportunities God presents.”

The Navy took steps to remove Klingenschmitt from duty after he resigned from the Evangelical Episcopal Church following his court-martial for praying in uniform in front of the White House last March.

However, Klingenschmitt argues that at the same time he resigned his ordination with the Episcopal group, he received the endorsement of the Dallas-based Chaplaincy of Full Gospel Churches.

Klingenschmitt said he prayed at the White House to protest the Navy’s prohibition against publicly praying in Jesus’ name, a regulation overturned last fall by congressional action.

“Congress ordered the Navy to rescind the policy for which I’m being punished,” Klingenschmitt said. “My sacrifice and court-martial caused such an uproar with the public that Congress rebuked the Navy and now other chaplains have the freedom I was denied.”

His imminent discharge from the Navy led the Rutherford Institute to file a lawsuit in late October, about three weeks before Vice Admiral J.C. Harvey, Jr. sent a letter informing Klingenschmitt of its decision.

However, Doug McKuisick of the Rutherford Institute said the lawsuit will continue.

“We felt there were free speech and religious freedom issues involved with this case,” said McKuisick, a staff attorney. “That’s why we agreed to take this case.”

The government has filed a motion to dismiss the suit, arguing Klingenschmitt doesn’t have a legal claim. If the Rutherford Institute successfully opposes the motion, McKuisick said it will continue to press for reinstatement and back pay.

Jim Ammerman, director of the Chaplaincy of Full Gospel Churches, said he considers the Navy’s decision to reject his group’s endorsement of Klingenschmitt an insult, since the Pentagon recognized CFGC as an endorsing agent 25 years ago.

The retired Army chaplain said he had written Chief of Chaplains, Adm. Robert Burt, to express his displeasure but has never received a response.

“I have a letter from 62 chaplains [claiming] mistreatment by the Navy,” Ammerman said. “I suspect the Navy was more wrong than he was; the Navy has been wrong so many times.

“Nineteen years ago I quit approving people for the Navy because I knew they wouldn’t be treated fairly,” Ammerman added, noting he made an exception for Klingenschmitt because of his situation.

Lt. Tommy Crosby of the Navy’s office of information told Baptist Press it would be inappropriate to comment on the case at this time.

In outlining the Navy’s decision, Vice Admiral Harvey said in his letter that a new endorsement does not automatically call for recertification. Evidence shows Klingenschmitt to be professionally unsuited for further service, Harvey said.

“A new ecclesiastical endorsement is just one factor to be considered in evaluating whether a chaplain’s professional qualification should be recertified,” Harvey wrote. “Other factors include the officer’s record of professional performance and accomplishment, disciplinary record, if any, and chain of command support.”

Harvey termed Klingenschmitt’s recent performance unsatisfactory, noting below-average marks in an evaluation for military bearing and character. The vice admiral also cited the chaplain’s Sept. 14 court-martial for violating a superior officer’s order and a lack of support from his community leader.

Klingenschmitt said problems with his superiors started in 2004, when he preached a memorial service in Norfolk for a sailor whom he had led to accept Jesus as Savior.

The chaplain said he delivered the same message that resulted in the man’s decision to follow Christ, which was based on Romans 8.

“The sailor loved that sermon but the skipper hated it because I quoted John 3:36 (‘Whoever believes in the Son has eternal life, but whoever rejects the Son will not see life, for God’s wrath remains on him,’ NIV),” Klingenschmitt said.

Two days later, his captain called him into the office, said he hadn’t accepted Christ and asked if he was going to hell, Klingenschmitt recounted.

After that, Klingenschmitt said he received a poor evaluation and has had problems with the Navy ever since.

The chaplain said investigators who later looked at his case decided that discipline levied against him was proper because the service was held on a Saturday, outside Sunday “divine services” when chaplains may conduct “public worship.”

Rutherford Institute attorney William Farley said this marks the first time in Navy history that a chaplain who has changed ecclesiastical endorsers is being forced out for making such a change.

“Chaplain Klingenschmitt … was a valued member of the military until one Navy captain decided that he did not like the content of the chaplain’s religious speech during an optionally attended sermon in the chapel,” Farley noted in the filing seeking an injunction.

Farley argued that the Navy’s action is inconsistent with the law and its regulations, which state the Navy shall recertify a chaplain’s professional qualification upon receipt of a new ecclesiastical endorsement.

“Shall” is a mandatory term and the government’s interpretation that it is permissive subverts the regulation’s meaning, the attorney said.

“The Navy’s argument concerning punishments of Chaplain Klingenschmitt are red herrings because they claim that the chaplain is being separated ‘solely’ because he changed his ecclesiastical endorsement, while they simultaneously contend he was properly punished for the content of his religious speech on several other occasions,” Farley said.

Ironically, the ousted officer said he accepted a demotion in rank and changed services to follow the call he felt God placed on his life. That included commuting from Colorado Springs to Virginia Beach from 1993 to 1998 to earn a master of divinity degree at Regent University.

Despite his problems, Klingenschmitt said he has no regrets with his actions to stand on his convictions.

“I’ve lost my pension, I’ve lost my home and I’ve lost my career, but it’s worth it because I still have Jesus,” the chaplain told Baptist Press. “I have not forsaken Him.”
–30—-