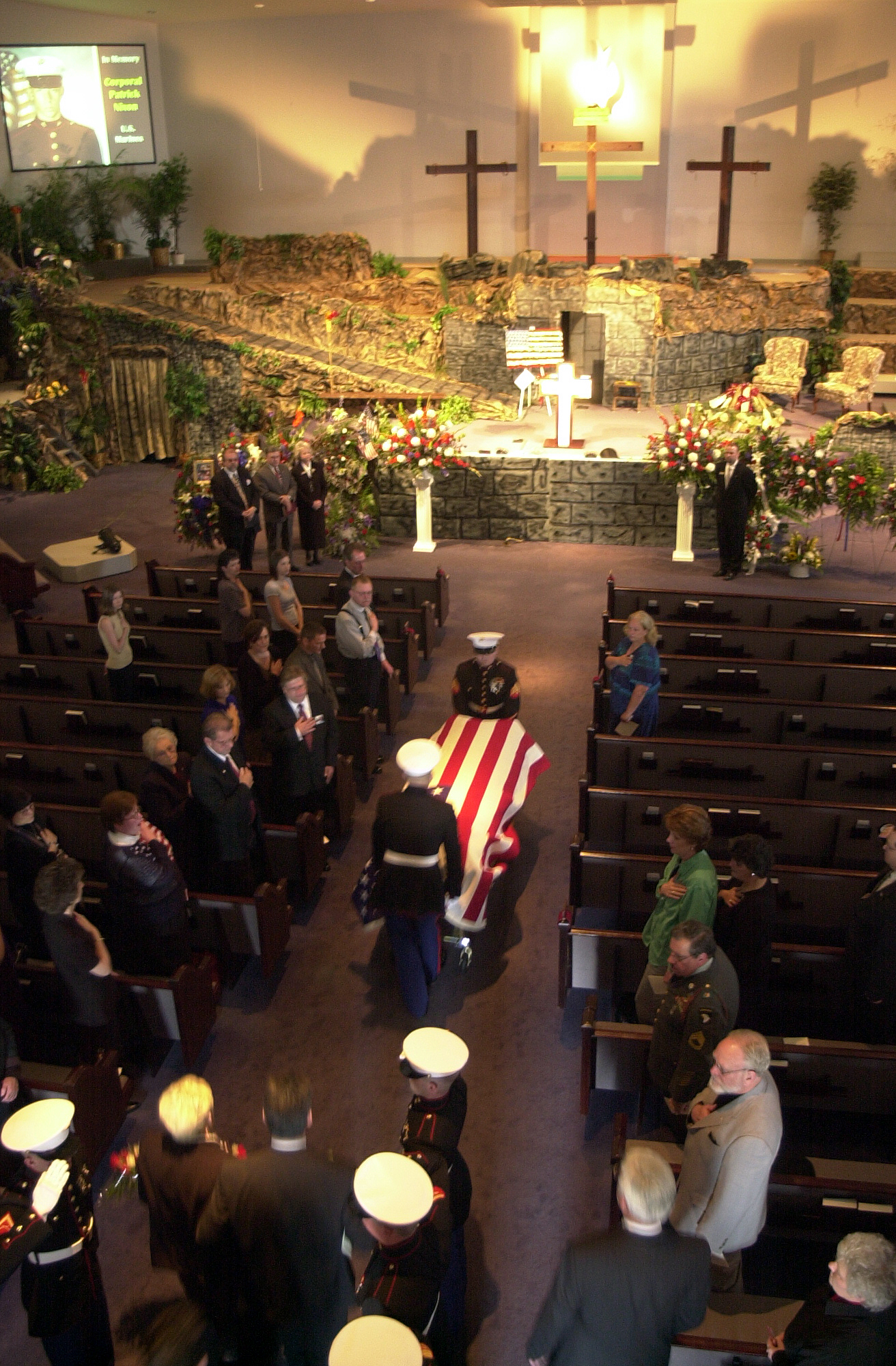 GALLATIN, Tenn. (BP)–Marine Cpl. Patrick Nixon was honored for his heroism during a military funeral service April 15 in Gallatin, Tenn. Nixon, 21, died when his unit was ambushed March 23 while trying to secure a bridge near Nasiriyah.

Referencing John 15:13, which says, “Greater love has no man than this, that he would lay down his life for his friends,” Michael Blankenship, pastor of First Church of the Nazarene in Gallatin, recounted Nixon’s heroic last stand.

“On a battlefield in Iraq, near a bridge, Patrick was there with his unit, Charlie Company, 1st Battalion, 2nd Marines. He was there on the front line with a friend named Manny,” Blankenship said. “Manny had been shot and was wounded on the battlefield, and Patrick came to his aid and took over his position. Manny was able to be extracted from the battlefield to safety. Shortly after, Patrick gave his life in the full measure of devotion for his friend. He laid down his life for his friends. He laid down his life for people that he did not know.

“Years ago another man laid down His life for His friends, laid down His life for all mankind that we might understand what it means to be free, and that was Jesus,” Blankenship continued. “Jesus gave His life for you. In times of need and trial He’s the one that we can call on. He is the one who seeks to have a relationship with us, not only for now, not only in good and joyous times, but in troubled times. Jesus can be as close as the mention of His name. He wants to have a relationship with you.”

Blankenship then presented the plan of salvation and gave an invitation to accept Christ for anyone within the sound of his voice at College Heights Baptist Church, where Nixon’s funeral was held.

Maj. Will Randall, a casualty assistance officer in the Marine Corps, read a letter to Nixon’s family from the Commandant of the Marine Corps, which said, “The profession of arms is not an easy life. Our men and women in uniform go in harm’s way almost every day. They do so not for personal gain but in answer to a higher calling, that of defending the ideas of our great nation and freedoms that we cherish.”

Nixon nobly and selflessly chose to serve his country, the letter continued, accepting the risks and giving generously of himself to defend the liberty Americans enjoy.

Nixon’s father, David Nixon, said his son — the first Tennessean to die in Operation Iraqi Freedom — was as good a son as anyone could want and always wanted to be a Marine despite the knowledge that he might have to give his life in battle. The father urged those gathered to continue praying for the families of the other Marines in Patrick’s unit killed that day near Nasiriyah, as well as all soldiers serving in Operation Iraqi Freedom.

“The family considered Pat our Marine, but I now understand that Pat is everyone’s Marine,” David Nixon said. “He is the person that was willing to go and fight not only for us but for people he didn’t know.”

Nixon’s older brother, Joe, spoke on behalf of their mother, Holly Woodruff, who died in 1996 after a long illness that Patrick Nixon helped her fight. Joe Nixon said his brother was not one for an audience, but he would have been the first one there to pay his respects for a fellow Marine.

Larry Gilmore, pastor of College Heights Baptist Church, remembered Nixon as someone who wanted to defend the underdog and deliver the oppressed just like in Operation Iraqi Freedom.

“He was a comedian,” Gilmore also recalled. “[He was] a young man who liked to make people laugh. He was fun-loving and had a good sense of humor…. He was someone who just kind of stepped in and broke the ice.”

Gilmore noted that Nixon came from a military family. His great-grandfather served in World War I, his grandfather was a B-17 pilot during World War II, his father was a helicopter door-gunner in Vietnam and his older brother was a Marine.

“He was a proud Marine, and he paid the supreme price to ensure freedom to Iraqi people and to us,” Gilmore said.

Nixon was a 2000 graduate of Overton High School in Nashville, Tenn., and had originally been listed as missing in action by the Pentagon, along with seven other Marines. About 250 people had stood in front of the Gallatin City Hall to pay tribute to Nixon and his family March 30. The crowd stood in front of a 50-foot-long American flag that was draped from a firetruck bucket as Ricky Skaggs sang “Amazing Grace,” The Tennessean newspaper reported.

A 12-hour visitation was held April 14 as hundreds of friends, family and strangers paid their respects to the fallen Marine. Nixon will be buried at Arlington National Cemetery outside Washington, D.C., April 17.
–30–
(BP) photos posted in the BP Photo Library at http://www.bpnews.net. Photo titles: A MARINE’S TRIBUTE, A FATHER’S FAREWELL, FIGHTING FOR THE UNDERDOG, THE COST OF BATTLE, DRAPED IN DIGNITY and SALUTING A FALLEN HERO.