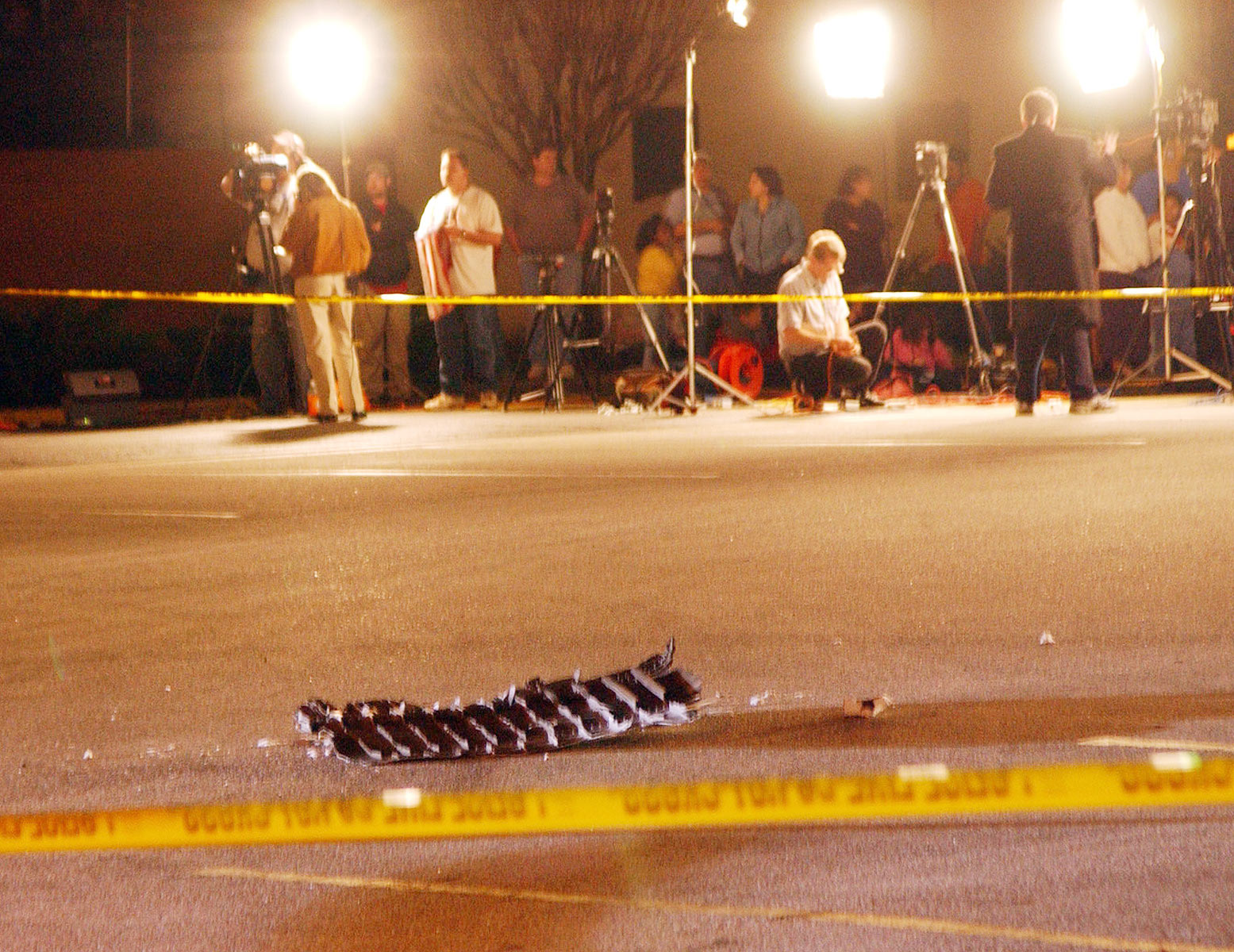 DALLAS (BP)–Seven astronauts aboard the Space Shuttle Columbia were killed Feb. 1 as the spacecraft blew apart above Texas reentering the atmosphere at approximately 9 a.m. Eastern time — just 16 minutes from its scheduled landing in Florida.

The U.S. flag at the Kennedy Space Center was lowered to half-staff soon after the disaster, which took place about 200,000 feet above the north-Texas area encompassing Dallas and Fort Worth. Debris was seen plunging through the skies before falling strewn throughout the region, reaching to within 150 miles of Houston.

Shannon Lucid, a NASA biochemist who logged more time in space than any American in history, told Baptist Press Feb. 1 that because she is a NASA employee she is not permitted to speak about the shuttle tragedy, but she said that astronaut Rick Husband, the shuttle commander, was “a strong, committed Christian” and “attended Grace [Community] Church off Highway 3” in Houston.

Three-time shuttle astronaut David Leestma told his pastor, David B. Fannin of Nassau Bay Baptist Church, that payload specialist Mike Anderson, like Husband, was a believer and a member of the Grace Community.

“He [Leestma] has shared with me before that there are a number of Christians among the astronaut corps,” Fannin told Baptist Press. Leestma, who now is based at the Johnson Space Center, had reflected with his pastor on the danger he accepted every time he flew on a space shuttle, in 1992, 1989 and 1984. “He feels it was what God wanted him to do,” Fannin said, of how Leetsma dealt with the anxiety faced by astronauts and their families.

“The NASA community is very much a family,” the pastor said, “and any loss like this is akin to the loss of a family member. It impacts everybody.”

Also aboard the spacecraft was Israeli’s first-ever astronaut, Ilan Ramon.

Columbia, on its 28th flight, was the oldest of NASA’s four-shuttle fleet, having first flown in 1981, but the spacecraft recently had been refurbished with state-of-the art equipment. In all, NASA’s space shuttle program has recorded 113 flights in its 22-year history; until Feb. 1, the only catastrophe had been the 1986 Challenger launch in which seven astronauts were killed.

NASA reported that the shuttle was en route to the Kennedy Space Center for a landing when it lost contact with the crew. The shuttle was traveling at an estimated 12,500 mph at the time of the disaster.

The crew was concluding a 16-day science-oriented mission that observers have been calling picture-perfect, beginning with its launch at the Kennedy Space Center into a clear blue sky.

NASA faces crucial decisions in the days ahead because three astronauts currently are aboard the International Space Station and will need to return via shuttle.

Jack Graham, president of the Southern Baptist Convention, told Baptist Press, “First of all, our love and sympathy goes out to the families of the shuttle aircraft crew and the NASA community. I lived in Florida and from the Challenger disaster I know that an incident like this has an enormous impact on the whole NASA family.

“Once again, we are reminded just how fragile life is,” said Graham, pastor of the Dallas-area Prestonwood Baptist Church. “At a time when America is facing war with Iraq, as a nation we should be on our face before God asking his hand to be upon our president who serves as commander-in-chief. Now he is tasked also to be comforter-in-chief. It is important that we pray for him, other leaders, our military members and NASA.

“I call upon Southern Baptists everywhere at this time especially to be in much prayer and to share the love and grace and comfort of our Lord, Jesus Christ.”

Morris H. Chapman, president of the SBC Executive Committee, echoed the grief Graham expressed, saying, “This is not only a national tragedy; it is a profoundly personal one for the families of the seven astronauts. We are powerfully grieved and deeply saddened by the deaths of these brave people. We stand with their families and friends in this sad hour. They are in our prayers, and we commend them all to the grace of God.

“Southern Baptist churches are made up of millions of people strongly loyal to America’s national interests, and we feel this loss as though it is our own,” Chapman said. “We pledge our ongoing prayers for the families of those taken by death, and for all those who work with the national space program.

“The death of one we love brings a heartbreak that only the grace of God can fully comfort, and we will pray that he will minister the keen comfort of the Holy Spirit to each of the grieving.

“The brevity of our lives is never far from us,” Chapman said, “and this sad event serves as a stark reminder to us all of our mortality, and that we may be unexpectedly called to meet God at any time. As Christians, we make it a priority to be prepared for that event, and to assist others to be prepared.”

Richard Land, president of the Southern Baptist Convention’s Ethics & Religious Liberty Commission, told Baptist Press, “Even after this tragedy, if they wanted me to volunteer on the next shuttle, I’d go.

“As a huge fan and supporter of the space program and someone who would still volunteer to be a chaplain on any shuttle voyage, I’m brokenhearted and I grieve for the lost space travelers and their families,” Land said. “This should remind all of us of the transitory nature of life. We should all pray for the families in their time of loss. I hope the families will draw comfort that the astronauts perished doing what they loved to do.

“I hope and pray that our brave and productive exploration of space will continue,” Land also said. “Lives are always lost in exploring new and unknown frontiers. Our responsibility and duty is to do our best to keep that loss of life to a minimum, and I am certain that is the goal of everyone employed by NASA.”

Robert E. Reccord, president of the SBC’s North American Mission Board, said, “The Columbia crew members were brave pioneers of the 21st century. And, like all pioneers they pushed the envelope of safety for those who would benefit from their exploration. They gave their lives on a mission of scientific discovery seeking ways to improve the lives of us all.

“Our prayers today are with their families as well as their colleagues who are walking through this great and tragic loss,” Reccord said. “We pray, too, for the military chaplains and local church pastors who will minister to the families and friends in the days ahead.

“It is, as all tragedies, a time to remember that each of us stands but a hearbeat from eternity. The most important decision we can make during our life is assurance of eternal life after death which only comes through Jesus Christ,” Reccord said.

President Bush included a passage from the Old Testament Book of Isaih in addressing the nation during the afternoon of Feb. 1.

“In the skies today we saw destruction and tragedy. Yet farther than we can see there is comfort and hope,” the president said. “In the words of the prophet Isaiah, ‘Lift your eyes and look to the heavens. Who created all these? He who brings out the starry hosts one by one and calls them each by name. Because of His great power and mighty strength, not one of them is missing.'”

Bush also stated, “The cause in which [the seven astronauts] died will continue. Mankind is led into the darkness beyond our world by the inspiration of discovery and the longing to understand. Our journey into space will go on.”

Israeli astronaut Ramon, 48, was a colonel in Israel’s air force and former fighter pilot who had fought in two Arab-Israeli wars and had been the youngest of eight pilots who destroyed an Iraqi nuclear reactor near Baghdad in 1981.

Three of the seven astronauts had flown in space before: Husband, Michael Anderson and Kalpana Chawla. The other four, pilot William McCool, David Brown, Laurel Clark and Ramon, were on their first space flight.

Debris from the shuttle fell as far away as Nacogdoches, Texas, 135 miles northeast of Houston, with a tailgate-size piece landing about two blocks from First Baptist Church there. Pastor Allen Reed told Baptist Press he and his wife were inside their house “when we heard a loud roar. It sounded like a locomotive and our house vibrated. It lasted for about 30 second and then it was gone.”

“It’s all over Nacogdoches,” a local barber told the Associated Press. “There are several little pieces, some parts of machinery … there’s beena lot of pieces about 3 feet wide.”

Numerous Americans, including many Southern Baptist laypeople employed in the space industry, were left with lifelong sorrowful memories during the 1986 disaster.

“There’s no more terrible feeling than to all of a sudden see that big ball of fire and smoke,” James A. “Gene” Thomas, the launch director of the 1986 Challenger flight, said in giving a testimony in the summer of 2000 at a Saraland, Ala., church.

Thomas recalled how then-Vice President George Bush flew to the Kennedy Space Center to speak with NASA workers that night.

“I stood there close to him, and he told us that Americans still supported us, and the president [Reagan] wanted us to find out what happened and rebuild the space program,” Thomas recounted. “There were big tears in his eyes as he spoke.”

Shannon Lucid, who spent a record-setting 188 days aboard the space station Mir in 1996, told USA Weekend magazine while in space, “Whenever we’re at frontiers, there are risks.

“It’s not only the space program,” said Lucid, daughter of missionaries to China. “There are risks just being alive. We have to recognize that and move forward.”
–30–
Erin Curry, Tammi Reed Ledbetter, Martin King & Todd Starnes contributed to this article. (BP) photos posted in the BP Photo Library at http://www.bpnews.net. Photo titles: AMERICA MOURNS 7 HEROES, COLUMBIA CREW and COLUMBIA’S WAKE.