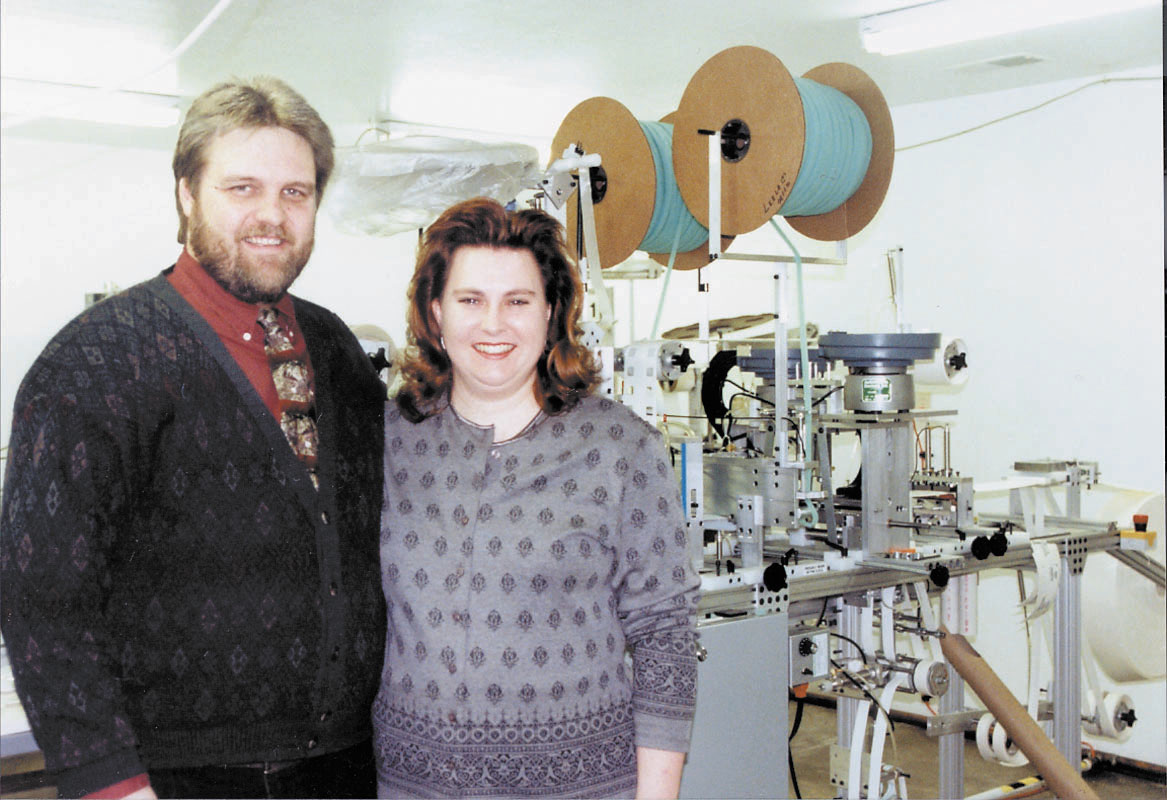 JEFFERSON CITY, Mo. (BP)–Michael and Nicala Ballard are partners in every sense of the word. Married since 1990 and in business together since 1993, the Ballards own and operate Taylor Industries, Inc., based in Jefferson City, Mo. They manufacture a medical supply called an electrode and the machines that make them. Both Ballards said starting and maintaining a small business is a tough road to travel. Both also believe they are exactly where God wants them to be.

“What has kept us going is knowing God will be faithful,” Michael said.

“For instance, on a Monday, we might only have $1,000 in our account, and payroll is on Friday. But a check from a customer or something always comes through, and we’re able to make payroll.”

Michael, whose degree is in industrial technology, began manufacturing electrodes — the pieces used to connect patients to heart monitors — in 1990 for a company in Wisconsin. When that company closed three years later, he went to work for a man who had built that company’s machines. “I asked him if it would be possible to borrow some machines and pay him monthly so we could start our own electrode business,” Michael recalled. He and Nicala already had cashed in their retirement plans to keep afloat financially while building and painting children’s rocking chairs.

“We had no capital investment; the bank would have laughed at me if I had asked for a loan.

“That man had no idea if I would sink or float, but his willingness to do that was a godsend,” Michael said. The two men are now competitors in the electrode business.

Taylor Industries [named for the Ballards’ godchild] sells electrodes to medical supply distributors worldwide, who, in turn, sell them to hospitals, clinics and militaries. Before the company started a website on the Internet, business primarily was by word of mouth in the medical community.

The Ballards have had customers from such nations as France, Korea, China, Saudi Arabia, Africa, Italy, Turkey and New Zealand. Although they deal with customers from across the nation and around the world, the Ballards’ focus remains on God and the people who work for them.

The company has five employees, whom the Ballards say they consider as family.

“If we fail, that’s one thing,” Nicala said, “but having other people fail because of the company, that’s a big responsibility to live with.” Nicala, whose degree is in fine arts and art education, worked at the company until she decided to stay home with their two sons.

Though both call Texas home, the Ballards settled in Missouri in 1997 to be near Nicala’s parents, who retired near Sedalia. They also liked the hills of Jefferson City, which reminded them of the college town where they met. Both were students at Southwest Texas State University in San Marcos.

They acknowledged that God has guided them each step of the way — through three moves in Wisconsin as the business grew; to the move to Missouri; to the hiring of each employee, especially an experienced machinist to operate and maintain the company’s five electrode manufacturing machines.

The machinist, Jim Sander, has worked with Michael for much of the past decade. At God’s prompting, Jim and his family followed the Ballards to Missouri.

“There is a lot of faith in this company. God has brought us this far, and He is going to keep His hand on us,” Jim said. “Mike appreciates what I do and the fact that this can be a frustrating job. He’s good about encouraging me.”

Taylor Industries’ plant can produce 3 million electrodes a month. The business recently moved into a new building. Now, Michael said, the company is branching out to build machines for other electrode companies.

“We have always built our own equipment,” he said. “But it’s just been in the last 18 months that we’ve started building and selling machinery. I realize the other companies are going to be using the equipment we make to compete against us [in the electrode market]. But they’re going to buy machinery whether I make it for them or not.”

Michael and Nicala said it is their goal to be Christlike examples to their employees, customers and colleagues. They place a Bible verse on all company invoices.

“This company legally on paper belongs to Nicala and me,” Michael said, “but we know God owns this company.

“We’re here to work for Him and do our best and be good stewards of it.” The Ballards attend Concord Baptist Church in Jefferson City. They have two sons, Kordell, 6, and Lucas, 21 months.
–30–
(BP) photo posted in the BP Photo Library at http://www.bpnews.net. Photo title: MICHAEL AND NICALA BALLARD.