Without warning, water began to pour into the doors and windows of Camila’s home; the floodwaters were moving so rapidly that before she had time to react, the water was already up to her neck. Clutching her toddler, she managed to swim across the kitchen and push her daughter on top of the refrigerator that was floating by.

Seeing no other way out, Camila began frantically thinking of ways to end their lives before drowning became the only option left. Just when her desperation peaked, she saw a small stream of light reflected off the water. Following the beam to its source, Camila watched some snakes wriggle out through a window that was not yet submerged. She quickly threw a nearby object at the panes, shattering the window just enough for her and her daughter to climb out.

Much to her surprise, rescue teams were waiting on the roof outside to help pull them out. With waters still rapidly rising, Camila insisted that they take the child first, as she resigned herself to being swept away by the current, but emergency responders were able to save them both.

Amid the excruciating aftermath of Hurricane Dorian, it is stories like Camila’s that drive home the resilience of Bahamians and the courage of emergency relief teams on the ground.

The monumental wreckage and loss incurred in Hurricane Dorian and its aftermath was unprecedented for Bahamians residing on the main islands. Throughout September 1–3, unrelenting winds exceeding 185 mph and tidal surges twenty-four feet high pounded the shores day and night.

According to the World Health Organization, after the initial impact, two thousand people emerged from the rubble needing emergency shelter, and over fifty people lost their lives in this catastrophe, with that number climbing each new day that rubble is cleared. Response teams are still unsure of how many bodies washed out to sea before being identified.

Faith communities emerged as bastions of hope during this crisis, with incredible pastors who cared for their congregations while also grieving their own families’ losses.

Some of these pastors sat down with BGR representatives spearheading the response and shared their heartbreak, saying that the tornadoes and tropical storms following Dorian were no less impactful than the hurricane itself.

One minister said the hardest part of shepherding his congregation has been hearing their stories of trauma: fathers who had children ripped out of their arms in the cyclones, vivacious teenagers who were permanently maimed by flying debris, families who had their homes ripped off the foundations and fly over their heads—the list is endless. 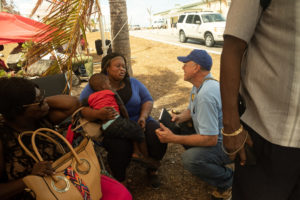 Though it was difficult for disaster response teams to gain access directly following Hurricane Dorian’s touch down, Baptist Global Response (BGR) was able to send an initial assessment team early on to begin the process of coordinating much-needed aid.

After meetings with the Bahamas National Baptist Missionary and Educational Convention, BGR was designated the lead response organization and, on September 8, conducted a thorough evaluation of the islands’ immediate needs in the wake of Dorian’s aftershocks. All proposed solutions were made according to the Sphere Project handbook, in order to abide by internationally recognized standards of disaster response protocol during humanitarian crises. This evaluation and protocol provided a clear framework for assessors to build on when it was decided that blankets, food, water, sanitation, and hygiene kits were main priorities in response to a disaster of this caliber.

Southern Baptist Disaster Relief (SBDR) and BGR representatives who reached the islands first quickly established that Abaco Islands and Grand Bahama were the most devastated areas and needed urgent assistance with materials for roofing repairs and debris removal in order for Bahamians to use the structures still standing as shelter. The goal in all response efforts was to meet the greatest needs in the most efficient and sustainable ways possible.

After several days of implementing relief efforts on Grand Bahama, SBDR, IMB, and BGR teams witnessed life begin to return to some semblance of normalcy: businesses were running, shops reopened, and survivors ventured out of their refuge centers.

The Abaco Islands, however, were completely decimated.

According to eyewitness accounts, you could see the horizon in all directions, as the islands were leveled and fully evacuated. Relief teams’ focus then shifted to the needs of the thousands of evacuees fleeing their homes to seek stability on neighboring isles with more infrastructure in place. Most families were only able to escape the nine-foot flood levels with the clothes on their backs, and the harsh weather conditions, mounting violence, and unattended wounds resulting from the chaos were becoming rising concerns for parents. Southern Baptist entities on the ground collaborated to continue running mass distributions of emergency supplies as a tangible means of caring for these hurting migrant families, despite the electricity outage impeding efforts on some islands.

As more missing persons were reported, the National Emergency Management Agency estimated that nearly five thousand refugees from the islands were in need of housing, with another 1,650 unable to evacuate—of those, many were elderly or had limited mobility; so on September 12, teams were dispatched specifically to seek out those who may have been overlooked in the turmoil of initial response efforts.

As of September 15, most Bahamians had received the assistance they needed. In the
capital of Nassau, sixteen operational shelters offered food, water, and medical care to migrant islanders. SBDR teams joined BGR partners in purchasing and distributing food to refugees; supplying women and children with hygiene kits; mobilizing the Bahamian Convention’s trained trauma counselors and chaplains; and providing churches with blankets, tarps, and other needed items.

Southern Baptists are still doing the hard work of helping this nation rehabilitate.

Teams are currently working on finalizing partnerships between thirteen Bahamian Baptist churches and state Baptist conventions in order to better care for their hurting congregations. Remaining relief teams are continuing to repair homes and churches, clean up debris, and engage survivors in trauma healing workshops.

Despite the tragedies that this community has endured, partners reported consistently being greeted with the same phrase of hope: “We survived and are doing well—thanks be to God!”

Similarly, the president of the Bahamas National Baptist Women’s Convention expressed her thankfulness: “We are so grateful . . . to our Almighty God that, even in the midst of the storm, He has touched the hearts of so many to come to assist us.”

There is a long, arduous road ahead, but partners are confident that God’s provision will continue to unfold for those made most vulnerable by Dorian’s impact; and we trust that God is on the move in the midst of this calamity.