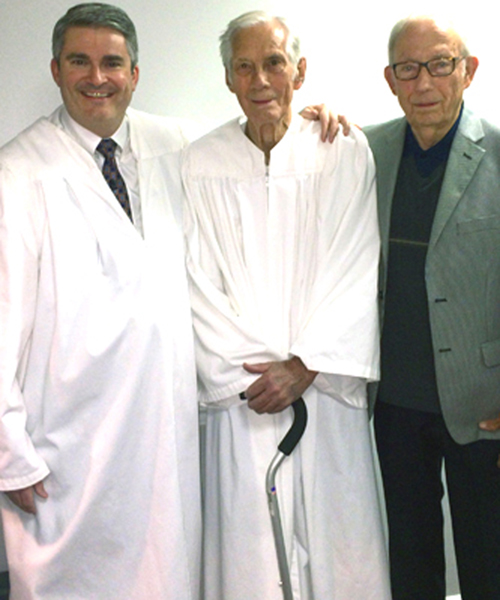 CONCORD, N.C. (BP) — In the spring of 2016, I learned that Harvey “Pete” Overcash was in a nursing home for rehabilitation due to an accident with a garden tiller. He did not attend our church, but his wife Norma was a faithful member for more than 40 years and had recently become homebound with declining health.

Norma was a children’s Sunday School teacher while Pete showed no desire to attend church with her, but she faithfully prayed for him.

When I walked in his room, Pete smiled and told me he was happy to see me, even though we did not know each other very well. After he recounted his accident and next steps to getting well, he began to ask questions that seemed out of character for him. I sensed God was stirring and he was under conviction.

It was a Wednesday afternoon, and I needed to return to church to lead the Wednesday night prayer service. I asked Pete if I could come back the next day to answer his questions. He nodded without hesitation and said that would be fine.

I called the former pastor, Darrell Coble, who was Norma’s pastor for 35 years, and asked if he would go with me the next day since he planted the seed of the Gospel in conversations with Pete many years earlier.

I also shared with the folks at our Wednesday evening service that Pastor Coble and I were going back the next day to talk with Pete. I said, “If you have ever prayed, please join me tonight in asking God to save this man.”

The next day I pushed Pastor Coble in a wheelchair into the nursing home, since he was recovering from recent surgery. Pastor Coble asked Pete, “Do you remember when I shared the Gospel with you about 30 years ago?” Pete said he remembered but wanted nothing to do with it at the time. This time, he was ready to listen.

Pete willingly prayed to accept Christ. I could hardly believe it. Later, as we left the room Pete thanked us for the visit and asked us to come back anytime.

The follow-up visits with Pete changed my life. His countenance changed completely. He read all of the four Gospels in a matter of weeks and asked many questions about what he was reading. Pete was 86 years old when he accepted Christ and could not get enough of reading God’s Word.

Several weeks later, Pete said that before my initial visit, he knew someone was coming to see him. God had been dealing with him. He knew he needed to get right with God but needed someone to tell him. That was the day that I walked into Pete’s room. He knew God sent me to talk about his salvation.

As weeks passed, Pete was able to go home, although walking after the accident was very difficult, even with a brace and cane.

During visits to the Overcash home located in the neighborhood behind the church, Pete often expressed how much he wanted to go to church but wanted his wife to get better so she could be with him on his first day in church. Norma was grateful for the change she saw in her husband but never got well enough to attend with him.

One day Pete stopped by the church office to bring an offering. I invited him to see the sanctuary, since he had never been inside the building.

He sat on the back pew spellbound, as the sun shone through the stained glass window. “Preacher, I always wondered what it would be like to sit down in here, and it is more beautiful than I ever imagined,” he said. “If you don’t mind, could I have some time alone?”

I told him to take all the time he needed.

Several months passed and Norma’s health continued to decline until the Lord called her home in October 2017. The following Sunday, Pete attended a worship service for the first time and has continued every Sunday. In one of my recent visits to his home, Pete said, “Preacher, I really need to be baptized before I die.”

We had discussed the importance of baptism two years earlier when he prayed to trust Christ. But because of his desire to see his wife healed and attend church with her, I did not push the issue.

He had many questions, including how we would get him in and out of the baptistery. I suggested that he come to the church soon so I could show him how it works.

A few days before Palm Sunday, Pete dropped by. We walked him through several scenarios, assuring him it would be OK. Finally, he looked at me and said, “Alright, I’ll do it! When do you want me to do this?”

I explained that the church had a special Sunday night service for Palm Sunday that includes the Lord’s Supper.

I said, “Pete, it would bless those attending to see your obedience and determination to be baptized if you would consider letting us baptize you this Sunday night.” He agreed.

As we walked down the hall, Pete said, “You know, I used to think this was all a fairy tale, but as sure as I know my home is behind this church, I know I’m going to heaven when I die.”

By God’s grace, we baptized Pete Overcash on Palm Sunday evening, March 25, 2018, at age 88. I shared his story with the congregation before the baptism. When I brought him out of the water, the congregation stood to their feet clapping and shouting to the glory of God.

Our church has been inspired to never stop praying for the lost. With God all things are possible!