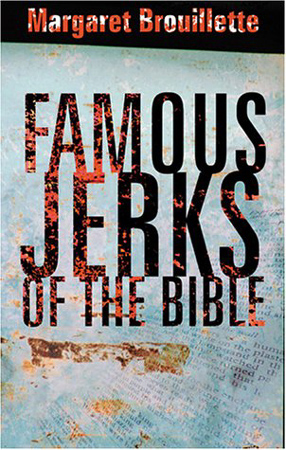 They cut us off on the interstate, take the parking space that was rightfully ours, talk too loudly during a movie, hurt our feelings and make fun of us. They’re at work and at home and in our classes, our clubs and our address books.

And they’re in the Bible, author Margaret Brouillette notes.

In her book, “Famous Jerks of the Bible,” recently published by Broadman & Holman Publishers, Brouillette introduces a familiar cast of characters, which includes Judas, Samson, Saul (father of Jonathan) and Jonah. But the book – penned as an interactive Bible study designed for teens — takes a sharp turn away from the familiar approach to these classic tales to get its message across.

“It’s a message of wisdom and choices,” Brouillette said. “Biblical righteousness doesn’t just happen. The Bible tells us to fear God and do good. I think there’s a window between 12 and 18 where we make many choices, so that’s why it was important for me to focus on teens.”

For Brouillette, the goal of Famous Jerks of the Bible wasn’t to retell the stories of these characters, but to present them in such a way that teens could recognize their own character flaws and, in the process, learn how to be people of God.

“A lot of the character flaws have to do with choices,” Brouillette said. “There are things we can avoid, but I also think that there is a self-control issue … an important issue for teens.”

In writing the book, Brouillette said she also studied the qualifications and character traits needed to be a good church leader.

“I think that the character traits I looked at in Jerks are the opposite [of what is needed],” she observed. “These are people who broke all the rules.”

In her book, Brouillette allows the rule-breakers to tell their own stories. Each chapter takes on a new character and a new character flaw, whether it’s Nebuchanezzar’s conceit, Pharaoh’s passion for power or Saul’s disobedience. After each character’s first-person account, Brouillette follows with a short evaluation and Bible study.

The decision to approach the book this way wasn’t an accident, she said.
“I thought it was very important for me to try to understand what made that person tick,” the author said of the Bible characters discussed in her book. “I really had to read and re-read their stories, because otherwise it’s very easy to make judgments from outside and not understand what the real problem is.”

Understanding the real problems and issues that teens face was an important part of why Brouillette wrote Famous Jerks of the Bible.

“I think these stories have been told and retold in a kind of classical way … but these character flaws go on today,” Brouillette said. “I tried very hard to be accurate, but retell the stories in a language we understand today. I don’t think teens are very interested in repeating the same pat answers. Life is gritty, and God can meet us in the grit. He’s where the rubber hits the road.”

Brouillette hopes her book will help lead teens down the right road — God’s road — by helping them learn to dig into the Bible and its stories to find important life lessons. More than that, she wants them to learn what’s important to God.

And maybe, she said, the book will help create a world with a few less jerks.