EDITOR’S NOTE: This story has been edited to correct the name of Alex’s father, Kevin. Based on media reports, Baptist Press incorrectly stated that the father was deceased. We apologize for the error. Also, please see Tyndale House’s response to the lawsuit released to BP April 12 and added as the fifth and sixth paragraphs below.

WHEATON, Ill. (BP) — Alex Malarkey, the boy who claimed in a bestselling book that he went to heaven while comatose from a car accident, is suing his publisher Tyndale House for damages including book profits from the since-retracted story.

The 2010 book “The Boy Who Came Back from Heaven” listed Malarkey as a coauthor with his father Kevin, but Malarkey retracted the story in 2015. “I said I went to heaven because I thought it would get me attention. When I made the claims that I did, I had never read the Bible,” he told Tyndale and book sellers at the time, which included LifeWay Christian Resources.

In a lawsuit filed April 9 in DuPage County Circuit Court in Wheaton, Ill., Malarkey said his father fabricated and solely authored the tale based on Alex’s two-month coma, signed the book deal with Tyndale and received all of the profits due the authors, with no compensation going to Alex, who was 10 at the time of publication. Both father and son were listed as the book’s authors, but in the lawsuit, Malarkey denies any authorship.

The suit seeks compensatory damages “at least equal to the amount of profits derived from the sale of the book,” punitive damages “which will exceed $50,000.00,” and a permanent injunction for Tyndale House “to take all steps reasonably possible to disassociate Alex’s name from the Book,” according to 32-page lawsuit.

Tyndale House, in a statement released to BP April 12th and added to this story as an update, called the turn of events “a terribly unfortunate situation which deeply saddens” Tyndale’s entire staff.

“Despite the claims in Alex Malarkey’s lawsuit, Tyndale House paid all royalties that were due under the terms of our contract on his book, The Boy Who Came Back from Heaven,” the publisher said. “Tyndale took the book out of print in 2015 when Alex said that he had fabricated the entire story. Any books still available from online vendors are from third party sellers.”

Malarkey, who turns 20 today (April 11), is a quadriplegic living on Social Security in Huntsville, Ohio, where he and his mother Beth who cares for him are on the brink of homelessness, according to the lawsuit. 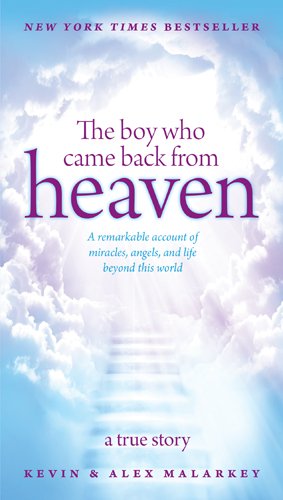 LifeWay pulled the book in January 2015 and announced two months later that they would stop selling all resources claiming “experiential testimonies about heaven.”

According to a YouTube video his mother posted on Twitter, Malarkey was baptized April 1 by Dana Kidder, pastor of the nondenominational Logansville Church in DeGraff, Ohio. Among Malarkey’s claims for punitive damages in the lawsuit is the contention that his “testimony for Christ will be perpetually marred by the need to tell every person who asks that what they read about him in the Book is a string of lies.”

In 2014, the Southern Baptist Convention adopted a resolution affirming “the sufficiency of Scripture regarding the afterlife.”