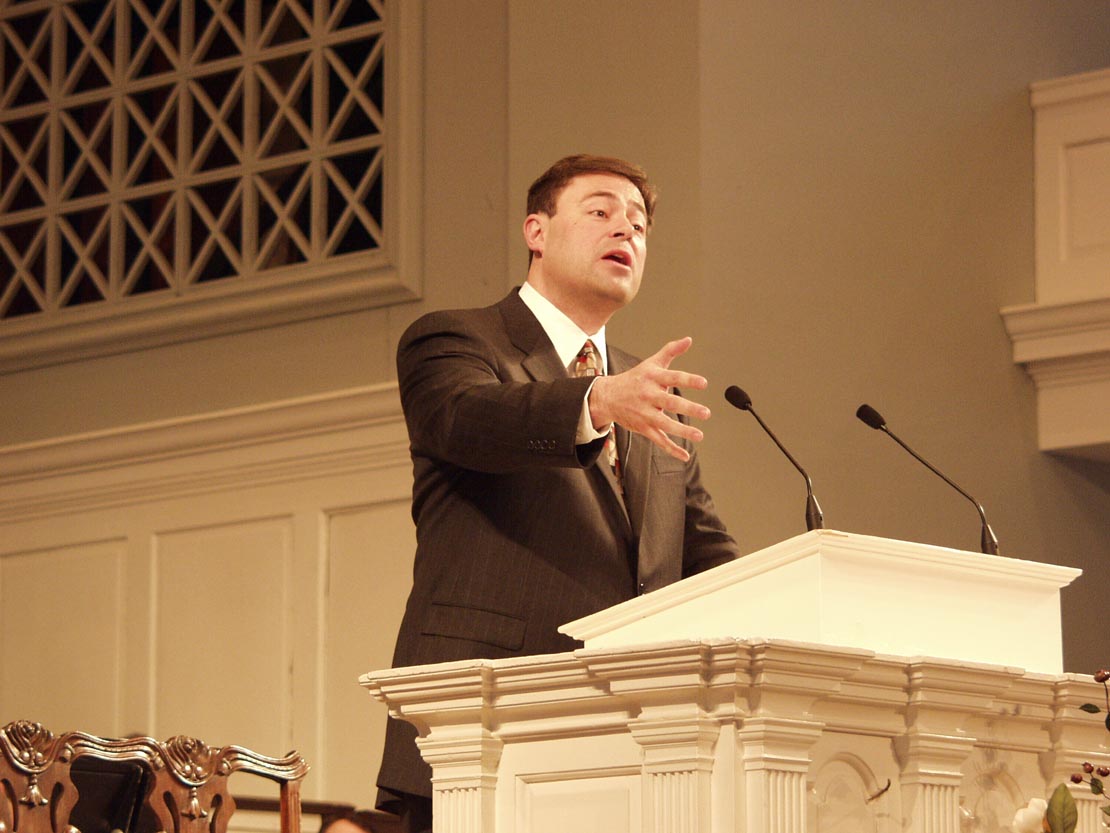 LOUISVILLE, Ky. (BP)–One of the essential aspects of the Christian life is membership in and faithful commitment to a local church, Mark Dever told an audience at Southern Baptist Theological Seminary.

Dever, who serves as pastor of Capitol Hill Baptist Church in Washington D.C., as well as senior fellow of the Center for Church Reform (CCR) there, was on the Louisville, Ky., campus to deliver the annual Gheens Lectures.

Church membership, Dever said, is the clear mandate of Scripture.

“You can have all the wonderful, thought-through stances on everything from the complete foreknowledge of God of future events to abortion,” he said. “But if your church doesn’t know what it means to be a church, you’re like a great mass of muscles with no skeleton.

“What do you do if you have a wonderful stance on abortion and you pray for pro-life issues, that people respect God’s great gift of life, [but] then you say nothing when members work in abortion clinics?”

A biblical understanding of one’s responsibilities and duties as a church member requires more than merely sitting in the pew, Dever said. It requires glorification of God by ministering to others. While ministry is important for laypersons, Dever said, it is a necessity for pastors as well.

“We live in a consumer-driven culture where we are called by everything around us to be consumers,” he said. “[God] calls you to become a provider for others as he entrusts the gospel with you. I fear many treat the seminary and even their church as consumers.”

Dever added that too many members ask: “What can [the church] provide for me?”

In holding that Christians are called to be more than consumers, Dever noted, “Even as Abraham was called to be blessed by God in order to be a blessing to others — so God has provided for us … so that we will turn and provide for others.”

Dever said Christians should join a church as a witness to non-Christians in order to demonstrate what it means to live as a sinner whose heart has been redeemed by the grace of God.

One facet of this is excluding from the membership those who live in deliberate, open and unrepentant sin, Dever said. By this, he added, they will perhaps be awakened to the fact that they might be lost.

“It may seem counter-intuitive to our modern ears,” Dever said. “But being willing to exclude individuals from our fellowship for the purpose of clarifying in their hearts and minds what God has not done is a great act of love. As best we can, we want to insure that each person who unites with our church believes and obeys Jesus Christ.

“So we want to take action when someone says he is a Christian but lives like a non-Christian. And what is the most loving thing to do? Encourage an unbeliever in his sin? Or to make that sin known and encourage that person to trust in Christ?”

Believers also should join a church for the sake of both weaker and stronger Christians in order to encourage and strengthen both, he said. Christians should also join a local church to help leaders in that body better minister to them.

“Commit yourself for the sake of those leaders that God raises up — the elders, the pastors in local churches — that you may be blessed by their ministry and also be a blessing to them.”

Believers should join a church also for God, whose idea it was to bring the church into existence, Dever said. He pointed out that in Scripture, in places such as Acts 2 and 2 Corinthians 2:6, the local church is usually spoken of as having a definable number of people. In Paul’s conversion on the Damascus road, Jesus set forth the church as his body by asking Paul, “Why do you persecute me?”

“This is where Paul got this image of the body as the church. Christ has so identified himself with the church that he is at work building it. It is his work, it is his body. And this is a largely forgotten idea today — even among seminarians.”

Messages from Dever’s Feb. 26-28 lectures can be heard on the seminary’s webpage at http://www.sbts.edu/news/audio/chapelspring2002.html
–30–
(BP) photo posted in the BP Photo Library at http://www.bpnews.net. Photo title: JOIN UP.