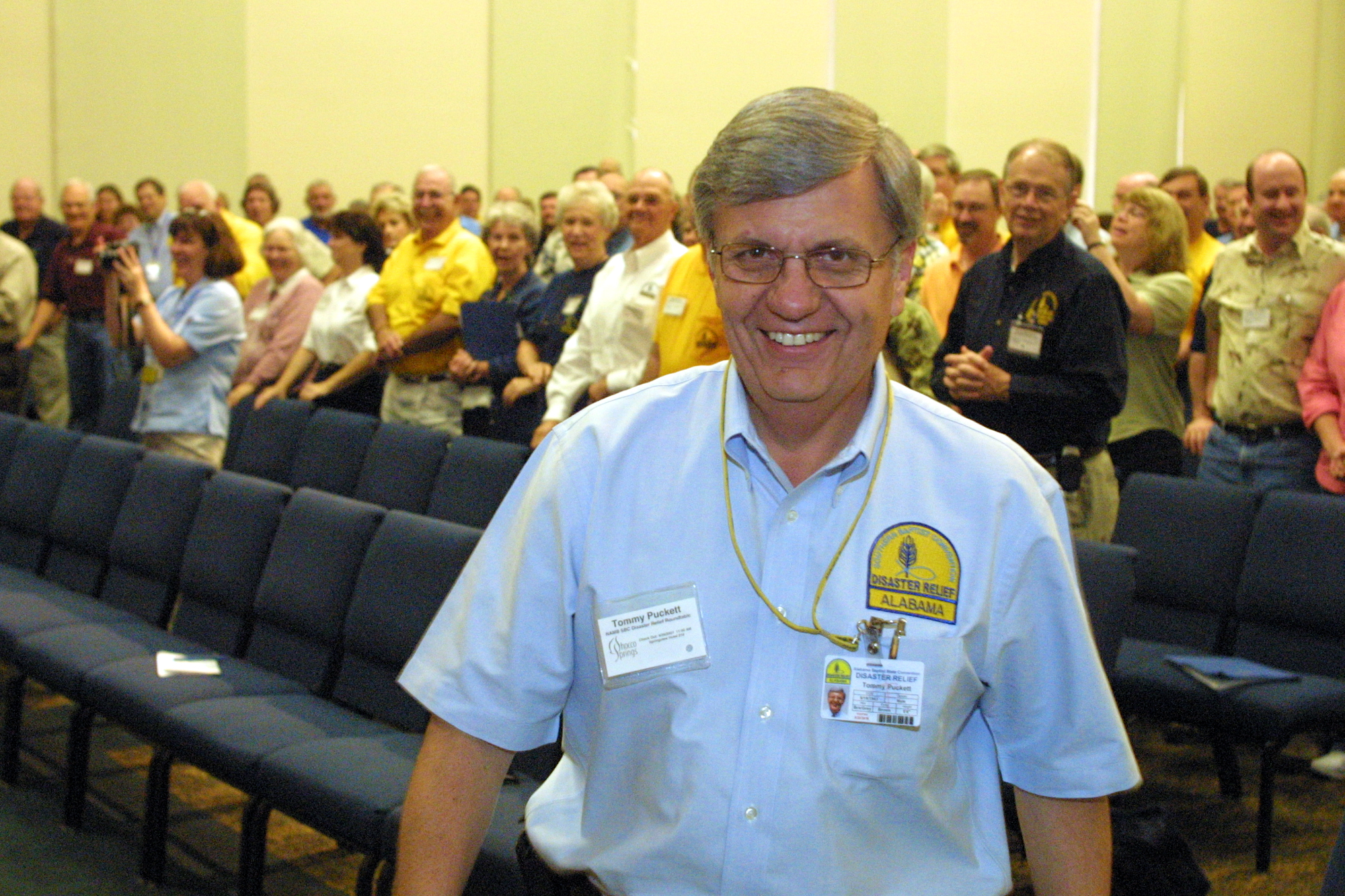 SHOCCO SPRINGS, Ala. (BP)–The woman in a small ice-covered town near Springfield, Mo., had no good words for the church. Having lost faith and hope in the church, she said she had opted out.

But that was prior to a cold morning last January when she was surrounded by 15 Southern Baptist Disaster Relief volunteers who presented her with a Bible, autographed by every man who had worked all day in sub-freezing weather to clear her property of downed trees and limbs after an ice storm.

Taking the Bible, she began to cry.

“I had given up on the church,” she told the group. “But I can’t believe how you people came to my house and did all this work. There’s no way I could have ever paid for it.”

Becoming emotional as he told the story at this year’s 2007 Disaster Relief Roundtable, Jim Wells, director of missions for the Tri-County Baptist Association in Nixa, Mo., said, “The chainsaw team’s chaplain then asked the woman if anyone had ever shared Christ with her. She dropped her head and said no.”

With the chaplain and the other men in a circle around her, the woman asked Christ to come into her life. The next Sunday, she made her public profession by walking down an aisle at a local Baptist church.

“That’s the bottom line of what we do. What we’re about is not feeding units or chainsaws,” Wells told a record crowd of 420 yellow-shirted attendees during the April 23-26 gathering at Shocco Springs Conference Center near Talladega, Ala.

“It’s about sharing Jesus and ministering to people in His name. It’s not about taking trees off of houses. That’s just an avenue to get where God wants us so that we can share the story of the love of Christ.”

In response to January’s ice storms in Missouri, Wells said 6,500 Baptist disaster relief volunteers came from 26 states to assist victims in Springfield, Joplin, Diamond and Waynesville. More than 33,000 hot meals were served, nearly 3,000 chainsaw jobs were completed and 24 people made decisions for Christ.

In addition to testimonials such as Wells’, participants at the annual conference celebrated the 40th anniversary of disaster relief in the Southern Baptist Convention; heard the North American Mission Board’s annual report on SBC disaster relief efforts during 2006; and were briefed by representatives of the Red Cross, Salvation Army and Centers for Disease Control.

Through the partnership of NAMB and the state conventions, Southern Baptists responded to 156 disasters during 2006, reported Terry Henderson, NAMB’s national disaster relief director.

During the roundtable’s annual awards presentation, Henderson presented the “Robert Dixon Award” -– named for Bob Dixon, the “father” of Southern Baptist disaster relief — to Tommy Puckett, director of men’s ministries/disaster relief for the Alabama Baptist State Board of Missions.

The “Joel Phillips Outstanding Achievement Award” was presented to Naomi Paget, a trainer of disaster relief chaplains from California, and to Ward Hildreth, active with the Virginia Baptist Mission Board disaster relief ministry for more than 20 years.