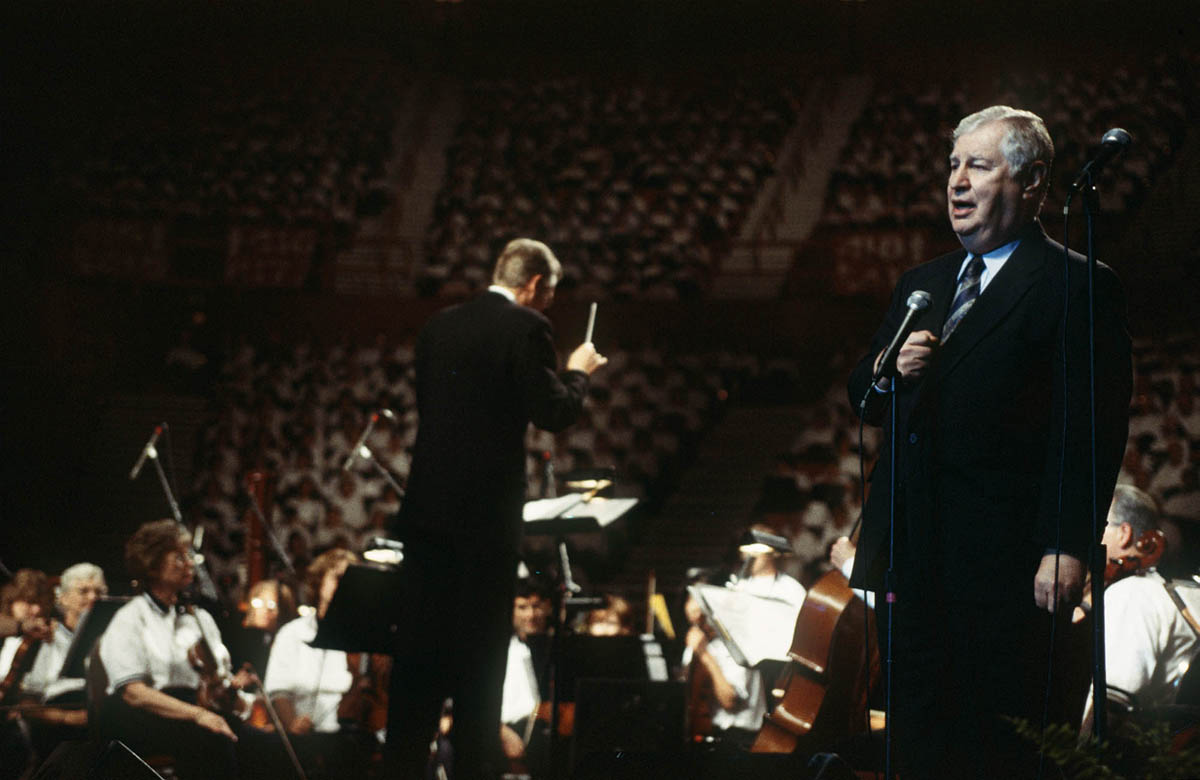 NASHVILLE, Tenn. (BP)–One year after the premiere of “Experiencing God … The Musical,” approximately 100,000 copies of the choral book have been ordered, it has received a Dove Award nomination and reports of its use in worship services continue to include significant spiritual results.

Hundreds of church musicians and worship leaders heard the first public presentation on April 26, 2000, at MusiCalifornia, an annual music conference in San Diego, and many of them returned to their churches convinced the musical message of Experiencing God would make a difference in their congregations.

Among those who were moved to action by the premiere is Joe Crider, minister of music at Second Baptist Church, Springfield, Mo. The following month the Second Baptist musicians began rehearsals, and in September the adult choir and orchestra led in worship with the musical.

Crider recounted, “170 members of our choir sang with our orchestra, and more than 2,300 people packed in our worship center to participate in the worship experience. This musical and the message went far beyond a one-night emotional high. Choir members rededicated their lives and orchestra members were moved to the point where they really couldn’t play. The altar filled up, and our pastoral staff had to climb over people who were at the altar, weeping and broken.

“The Sunday night after the musical,” he continued, “15 college students joined our adult choir. Our orchestra, most of whom are members of the Springfield Symphony, asked if I would lead them in a Bible study. So far, we’ve had five baptisms in the orchestra alone.

“There has been an outpouring of thanksgiving and love from our people. Our choir understands more and more each week the importance of being a worship-leading choir rather than an event-based, anthem-only group. Experiencing God really drove that point home.”

And while enthusiastic responses have come from a wide range of Southern Baptist churches, Experiencing God … The Musical has reached congregations of other denominations also.

One of the more remarkable reports came from Lela Satterfield, director of worship at Fountain Valley (Calif.) United Methodist Church.

After a Sunday morning presentation of the musical last fall, Satterfield reported nearly 70 persons were saved, with almost as many rededications.

“So we encouraged the congregation of about 250 persons to invite others to an evening presentation March 4,” she continued. “That night the church was full, and again we had dozens of decisions. Then on Wednesday, March 7, we hosted area liturgical churches — Catholic, Episcopal, Lutheran and Presbyterian — to a Lenten supper and presentation of Experiencing God. We used the Blackaby video, PowerPoint lyrics, slides, special effects, an orchestra of 16 players and full choir and soloists — quite an undertaking for our church!

“The church was packed and more than 100 people were saved, in addition to dozens of rededications. We know that it was not the multimedia presentation or the excellence of our music that did anything,” she observed. “It was a supernatural work of God, and we feel so blessed to be part of it.”

Written by Claire Cloninger and Gary Rhodes, the 70-minute work features original songs, along with some classic hymns, praise choruses and contemporary Christian songs made popular by contemporary artists. An interweaving of narration brought it under the umbrella of the “seven realities” discussed in the book Experiencing God by Henry Blackaby.

Mark Blankenship, director of the music ministries department at LifeWay, said it was important that the musical have integrity because of Experiencing God’s biblical basis.

While a college student, Rhodes was a summer missionary at Faith Baptist Church, Saskatoon, Saskatchewan, Canada, where Blackaby was pastor for 12 years.

“He was preaching these principles every Sunday, and it was a life-changing thing for me and the other students to hear him,” Rhodes said during the week of the premiere.

Cloninger, who worked on the musical courtesy of Word Music, had studied Experiencing God at her church.

“It was the most instructive and practical help I’ve ever had in really hearing personally from God,” she said last year. “So often a message inspires in some nebulous way and gives you a warm feeling about God. But personal things happen with this one, and you could really hear God whisper in your ear.”

Though the musical did not win the Dove Award for which it was nominated, Blankenship said he feels the work’s impact on individuals who hear it and who present it is far more significant than professional recognition.

“God has used this musical to change many lives, and he continues to do so.” Blankenship said. “There is something special about the musical, and God’s hand is definitely blessing its usage across the country. Every music leader should give careful consideration to using the musical in their church to minister to the lives of their congregation and community.”