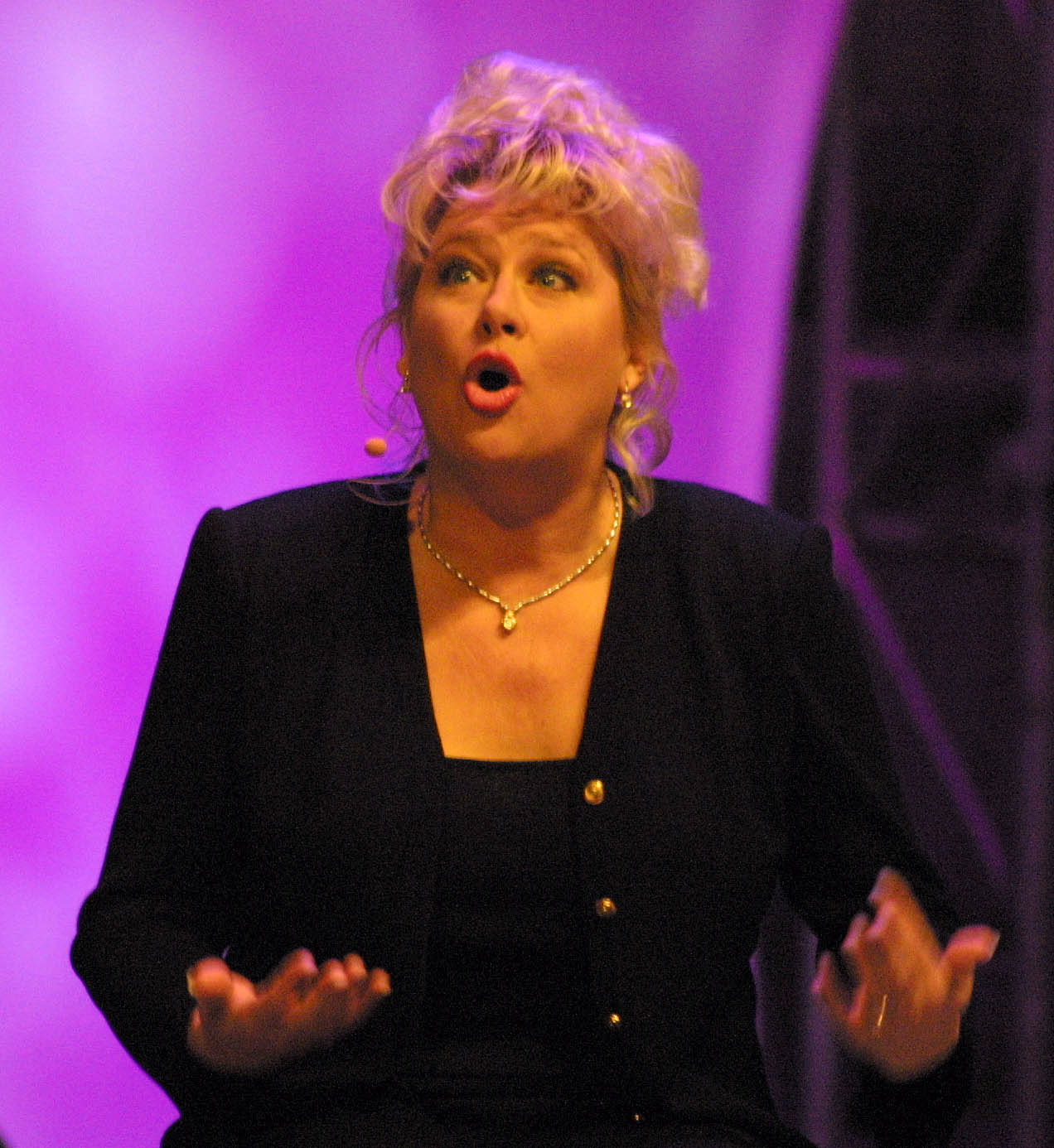 DALLAS (BP)–The scene from “Saturday Night Live” was vintage Victoria Jackson. While holding a perfect handstand on the Weekend Update desk with a Christmas tree on top of her, she recited one of the simple little poems that helped lead her to comedy stardom during the 1980s.

“I wrote something about the Christmas tree is a symbol at Christmas, even though it’s a pagan symbol and really shouldn’t be, because the meaning of Christmas is Jesus coming to the earth to be our Savior,” she said during the Jan. 22-24 Elevate 2004 conference.

“Now this is the poem I wrote, but nobody really heard because I was upside down, people were laughing,” she continued during an on-stage interview. “But I thought, ‘You know, even if no one hears it, God knows that I’m talking about Him on Saturday Night Live.'” It turned out that people did notice, though, including one man who brought it up 15 years later.

In several appearances during the Elevate conference at Prestonwood Baptist Church in suburban Dallas, Jackson shared how she balanced her faith and career — with the trademark squeaky voice that continues to captivate audiences today. While her faith in Christ was never a secret, it has only been in recent years that she has begun addressing that area of her life more publicly.

Elevate 2004, an experience of multimedia, worship and high-profile speakers to help young adults ages 18-29 integrate their Christian faith into all areas of life, also is scheduled Feb. 19-21 at the Charlotte Convention Center, again featuring Jackson as well as other leaders in entertainment, politics, law and business.

Jackson — still able to hold a handstand at age 44 — shared how she came to Hollywood from Miami in 1981, well-grounded in her faith if still somewhat naive about show business. A gymnast, high school cheerleader and homecoming queen, she had accepted Christ at age 6, attended Bible college and was an active witness for her faith.

In Hollywood she combined her knack for gymnastics and poetry by doing handstands while reciting poetry or singing songs with a ukulele, a quirky mix that landed her 22 appearances on “The Tonight Show” beginning in 1983. She later served on the cast of Saturday Night Live from 1986-91.

During Elevate, Jackson shared her testimony of lessons learned, particularly her decision to rationalize away one of the verses that kept coming back from childhood: “Be ye not unequally yoked together with unbelievers, for what fellowship hath light with darkness.” Instead, she spent years in a failed marriage, eventually returning to Miami in 1991 to marry her former high-school sweetheart.

Breaking into part of her stand-up comedy routine, she said she likes to call her ex-husband Satan. “I don’t think there’s anything in the Bible that says you can’t take the devil’s name in vain,” she said, adding that she has toned that down since he has threatened to sue her. “Now I just call him the artist formerly known as Satan. … But I’m still praying for him to be born again.”

Jackson said she has learned over the past 12 years to rely on God more than ever, as her move to Miami coincided with a slump in calls for high-profile television and film roles.

“In my 30s my life verse was, ‘Delight thyself in the Lord and he will give you the desires of your heart,’ because suddenly I went from Saturday Night Live in the fast lane to nothing.”

But more recently she has been able to not only begin speaking about her faith, but she has fulfilled her original career dream of being “the best airhead in a sitcom” by playing the ditzy nanny on Nickelodeon’s new series, “Romeo!”

Bringing up her faith in Christ is always a sensitive issue, Jackson said, noting several encounters she had with fellow Saturday Night Live cast members and others in the industry. The Christmas tree incident was one of the times she was able to get her message across in a humorous way.

One method she’s used effectively is simply sending people a Bible as a gift, including one she sent to Johnny Carson with a note thanking him for launching her career.

“Going to the store to get the Bible was hilarious,” she said. “It was like, ‘What name would you like engraved on it? And I said, ‘Johnny Carson.’ And she said, ‘What?’ And I said, ‘Well he needs the Bible too.'”

She also gave every cast member on Saturday Night Live a Bible on cassette tape one Christmas, thinking they could listen in their cars.

“That’s my mission field,” she said. “Mostly I just try to love them, and then it just comes out of my heart at the right moment. And I can’t even help it, because I talk all the time.”
–30–
(BP) photosposted in the BP Photo Library at http://www.bpnews.net. Photo titles: HER FAITH IS NO SECRET and QUERYING THE COMEDIAN.