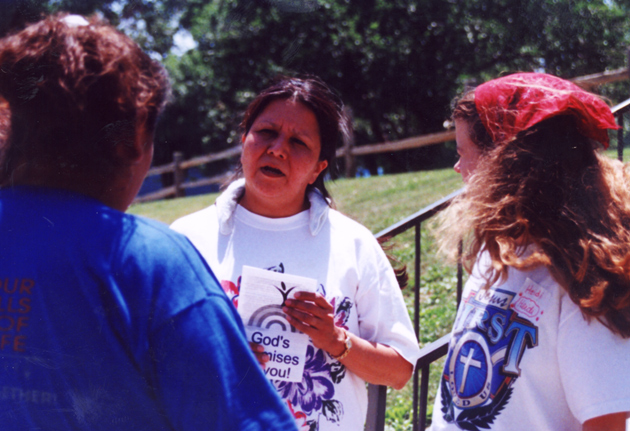 OMAHA, Neb. (BP)–Stretching toward the Missouri River on the border of Nebraska and South Dakota is Santee Sioux Indian Reservation. There are no flashing lights, sleek tour buses unloading passengers at a glitzy casino, or giant marquees announcing the visit of a Nashville recording artist. In fact, the reservation is in a desolate area of Nebraska, and given a choice, most people would probably decide against living here.

Poverty is rampant, unemployment is high, and lack of education makes finding good jobs very difficult for the Native Americans living there. In fact, to find a good job requires driving an hour into South Dakota.

From their base in Omaha, where Ron is pastor of All Nations Church, the Goombis are reaching out as Southern Baptist missionaries to people from various cultures hurting both financially and spiritually. In their role for the Kansas-Nebraska Southern Baptist Convention, the Goombis have a burden to reach people who for the most part have shunned the “white man’s religion.”

The work is slow and difficult as older Native Americans are encouraging younger generations to embrace the culture and heritage of their past. With that encouragement comes the mindset among many that Christianity in some ways represents something that was forced upon them years ago as America was being settled and Native Americans were forced from their homeland onto reservations, Alpha Goombi said.

“We are called to present the gospel, and how God brings Jesus into their culture is up to him,” she said. “This is a group of people who have been put on the shelf, so amidst all the problems, there is a need for God.”

The Goombis’ ministry includes a monthly four-hour trek with a van full of volunteers from Omaha to the Santee Sioux Indian Reservation for a day of Bible study, recreation, lunch and other activities as part of a regular ministry there. During the summer months, Vacation Bible School and other weeklong activities are held.

On a cloudless spring morning, dozens of kids rush into the Dakota Youth Center on the reservation. Separated by age groups, the boisterous and smiling kids of all ages rush to the colorful signs identifying their classes.

Vicki Wolkins has a dozen elementary children around her as she asks the question, “Have you ever been told some good news?”

Sheldon raises his hands and says, “A long time ago, when I was 6, but I am now 7,” pausing and clarifying things. “Well, once, my mom took me to the circus and I got to see a lot of my family there. That is good news.”

Vicki smiles and continues and tells Sheldon and the other children about the good news Jesus offers and how he died on the cross, rose again and now lives today. The youngsters smile and all agree that that indeed is good news.

“When I come to the kids, the joy is bittersweet,” Wolkins says later. “They are so hungry for love, and live in such spiritual darkness. The answer to all their questions is the same … Jesus.”

As Alpha Goombi pointed out, the work is slow and can be discouraging but Wolkins and other continue in the work because they feel God has called them to it.

“It breaks my heart to see so many continue to reject the only one who can give them life and light,” Wolkins said. “However, I know that their response should not discourage me. I’m simply to be faithful in what God has called me to do, and it’s all about Jesus, not me.”

One of the challenges is to be consistent and faithful each day, Ron Goombi said. Because they have been lied to for so many years, Native Americans watch you to see if “your words and actions are the same.”

The Goombis are not only reaching out to Native Americans but many ethnic groups through the Omaha Baptist Center, an inner-city ministry that has branched out to the reservations. As director, Ron oversees afternoon and evening Bible studies, afternoon tutoring programs, a computer lab, feeding ministries, his own congregation and other activities that take place there.

When they arrived in 1998, an Indian spiritual leader confronted Ron and asked him why he truly was there in Omaha. Ron, a Kiowa/Choctaw from Oklahoma, replied that the Lord Jesus loves his people.

Having seen numerous church groups come and go after chalking up statistics, the leader had wanted to see if Ron and Alpha, a Kiowa from Oklahoma, planned on being there for a long time.

“Well, I don’t agree with your gospel, but I agree with the idea of a Native American coming to share the gospel with his people,” the leader said.

At that moment, Ron knew without a doubt he was called to fill the ministry position.

The work at the Santee Sioux Indian Reservation has not only been a blessing to the people living on the reservation, but to countless volunteers who travel every month to be a part of the ministry. Leah Push is still in high school but began volunteering four years ago and has remained faithful ever since.

“The kids have such sad eyes that reflect their tough home life,” Push said. “But when we are with them, we see such beautiful smiles on their faces as they learn about God’s love for them.”

Although many struggle with such difficult circumstances, Push said they seem to hunger to know God.

“As I look at children who haven’t had the opportunities that I have had, but do want to know Christ, I realize that I have been given such a privilege in serving the people of Santee Sioux,” Push said.
–30–
(BP) photos posted in the BP Photo Library at http://www.bpnews.net. Photo titles: ALL CALLED and NATIVE AMERICAN MISSIONARIES.