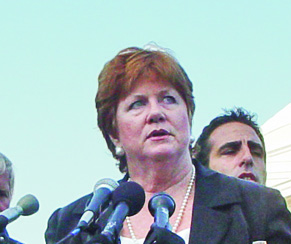 ST. PETERSBURG, Fla. (BP)–In her first interview since last year’s controversial dehydration death of Terri Schiavo, Pat Anderson, a longtime attorney in St. Petersburg who worked on the case for more than three years, said she felt like she was “dropped into boiling oil” when she entered the case in 2001 in the midst of an appeal to the Florida Supreme Court.

Anderson had opened a solo practice after 19 years of doing media defense. After Terri Schiavo’s father, Bob Schindler Sr., asked her to take the case, she saw it through motions and appeals that held off Terri’s dehydration for three and a half years.

“It was one emergency after another,” Anderson said, until she withdrew from representing the Schindlers in September 2004 after Bob Schindler enlisted David Gibbs III to look for new strategies in the case.

“I had filed and argued everything I could think of at that point and was not making much headway — so Terri was his daughter. It was his call,” Anderson told the Florida Baptist Witness. “I thought that particular moment was not a good moment to switch horses, but he wanted to do it so I withdrew and it was quite an experience.”

Anderson said a dislike for the national news media — the profession she had represented for most of her legal career — grew out of her involvement in the case.

“I know that they can get the story wrong and they will repeat it wrong every single time after that, no matter what you do,” Anderson said. “We handed out transcripts of key testimony with certain answers highlighted for them and they wouldn’t read it. So, it was a very disappointing experience.”

She also learned through the case that there are “lots of Terri Schiavos” who are older than Terri and don’t have families who are alive and willing to fight for their lives.

“In terms of dehydrating to death the patient that somebody, somewhere has decided has lived too long — that’s standard practice in the U.S.A. today. It’s called death with dignity,” Anderson said. Citing the practice as part of hospice care, she also said it happens in nursing homes, is assisted by heavy doses of morphine and “it’s accomplished when there is nobody around to object.”

Additionally, she said, anyone who suggests Terri’s death was painless is not being honest.

Calling dehydration an “enlightened western form of population control,” Anderson said it is not a painless process and that Terri, like her brother Bobby Schindler pointed out as she was dying, was struggling to live and did not look “beautiful.”

“In many ways, it’s the other end of the abortion debate, frankly,” Anderson said, admitting she has completely changed her mind on the issue of abortion, despite having defended the practice since she was a young woman.

“Once you really examine the evidence and take a cold, hard look at it, it’s almost inescapable that killing a baby is not a solution,” Anderson said. “Killing babies is not the way out of social problems or personal problems. Killing off your elderly or disabled is not the way to keep your healthcare budget in balance.”

Comparing Terri to an unborn child who cannot speak for himself or herself, Anderson said in many ways Terri, who left no advanced healthcare directive or no written living will, had no voice, though she tried to speak.

“And yet, on the basis of the word of her faithless husband, the court was persuaded that Terri wanted to die,” Anderson said. The decision “will stand, frankly, as one of the hallmarks in American jurisprudence, sort of the high water mark of a manifest injustice, in my judgment, right up there with the Dred Scott opinion.”

As a professing Christian, Anderson said it would be hard to “overstate” the effect the case had on her.

Recalling times when she would go to sleep and wake up with a new approach to a problem, Anderson said she has no doubt that God began to give her signs that He was at work despite the glaring fact record in the case and the adverse rulings she had inherited.

From the beginning, Anderson admitted she was stubborn and believed there would come a day when “some judge would slap his forehead and say, ‘This is wrong. We need to send this back and get this all redone. We are putting a young woman to death on kind of a shaky foundation here.’” When that didn’t happen, Anderson said she knew there had to be a plan with a greater purpose afoot.

“I am really truly at peace with the idea that Terri died according to God’s plan,” Anderson said. “I also believe the individuals involved, especially Michael Schiavo, [his attorney] George Felos and [Circuit Court Judge] George Greer also had the free will to do the right thing. And they chose not to and they will have to answer for that. But I believe, really, that Terri was an instrument of God and that Terri’s death was an instrumentality of God to raise awareness of euthanasia.”

Laughing that her lawyer friends will now see her as a “nut,” Anderson said, “[U]ntil you have experienced something like this, it’s easy to dismiss it. But I am firm in my conviction and perfectly content that the world saw God’s plan unfolding here.”

On a personal level, Anderson said she met a lot of people through the case and came to examine her own religious beliefs.

Additionally, Anderson said she has watched a case being spun as an unwarranted government intervention in a private family decision, something she said is unmerited.

“I saw firsthand how the system to which I have devoted basically my entire adult life is so deeply flawed,” Anderson said with regret. “This was a slow-motion murder and what is the government’s role in protecting its most vulnerable citizens. There were a lot of legislators who believed, and people in the executive branch who believed, that the government has a role in protecting those people, the innocents among us. In the judiciary, by contrast, the devotion is to the rule of law and so, on the judicial side, once Judge Greer’s finding of fact and conclusions of law were confirmed on appeal, that became final.”

Calling the decisions in the case “bad law and good policy,” Anderson said in America most people “pretend” judges possess “special faculties -– and they don’t; they’re just ordinary people. The job is what is important.”

Recalling the personal cost of representing Terri Schiavo’s parents in the case, Anderson said it has been so “disastrous” financially that she moved offices, downsized her living arrangements and was finally able to marry her fiancée after having to apply for a marriage license three separate times during the years she worked on the case.

“When I’m questioned about it, I know that I did my best to keep her alive and I think that was God’s will for me in this, to try to keep her alive,” Anderson said. “When it became my time to step off of the stage, the rest of the plan unfolded without me. I was a bystander.

“I don’t talk too much about it,” Anderson continued. “It’s very difficult for me to talk about it because it was a case of manifest injustice. It was not right what happened; it was not right.”

Commenting on the reason Terri’s husband Michael Schiavo, Felos and Greer all have been on the speaking circuit about their involvement in the case, Anderson said she thinks they might have “a guilty conscience.”

As far as what Michael Schiavo should have done, what he could have done, Anderson points a finger at a “self-absorbed” and “selfish” culture which fails to see an “obviously blatant conflict of interest and adulterous relationship.”

“What is he supposed to do?” Anderson asked rhetorically. “My final answer to that is he’s supposed to do what our grandparents would have done. To remain true to their marriage vows. You don’t abandon your spouse just because it becomes inconvenient for you and because your spouse gets sick or injured.”
–30–
Joni B. Hannigan is managing editor of the Florida Baptist Witness, on the Web at www.floridabaptistwitness.com.