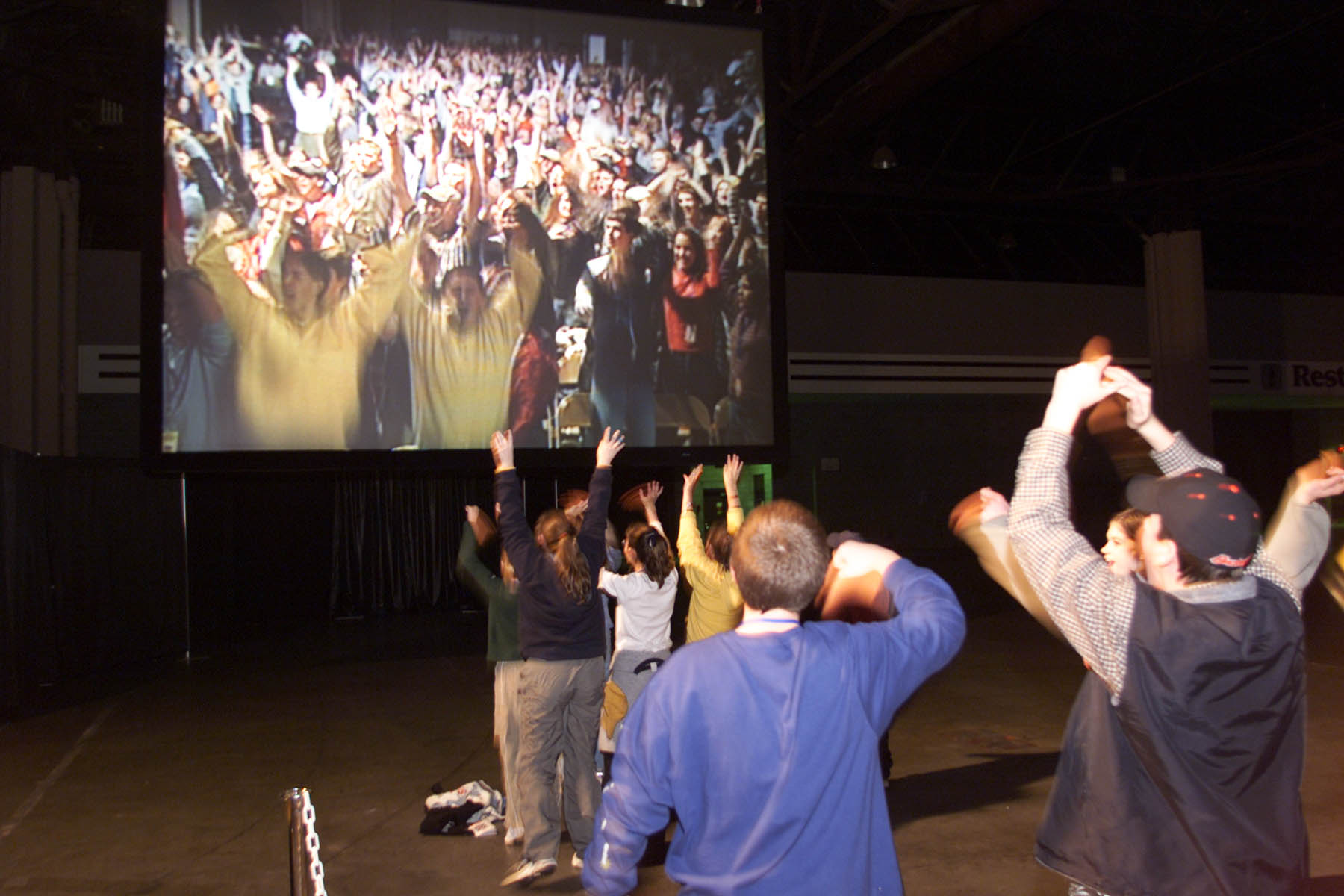 The first-night attendance of approximately 41,000 at the seven sites was well under the 200,000 originally projected, largely because of concerns about the potential for disruptions caused by the “Y2K” computer bug. But several students who attended said they weren’t worried.

“I know we’re in God’s hands. We’re protected,” said Jamie Freeman, a pastor’s daughter from Los Angeles who plans to mark her 18th birthday at midnight Friday at the YouthLink celebration in Anaheim. “We’re not worried about it,” she said.

“It just brings God out of me,” Kristin McGowen, 14, of Snow Hill, Maryland, said of the Philadelphia YouthLink. “I can fellowship with my friends, knowing that they’re having as much fun as I am.”

YouthLink 2000 is sponsored by four Southern Baptist Convention agencies — LifeWay Christian Resources, the International and North American mission boards and Woman’s Missionary Union — as well as state conventions affiliated with the SBC. It began Wednesday night, Dec. 29 and will stretch into the wee hours of Saturday morning, Jan. 1.

They arrived in the regalia of their youth. They wore baggy pants and clumpy shoes, ball caps and ponytails, and, depending on the locale, heavy sweaters or tank tops and T-shirts.

They cheered, sang along and bounce-danced to ear-splitting, heart-pounding praise and worship led by local as well as nationally known Christian rock bands. In some sites, they laughed with a sprinkling of Christian comedians. And although the scene was often reminiscent of a rock concert, the message was different.

“I absolutely believe that true life is giving your life to Jesus,” recording artist Rebecca St. James, a native of Australia now living in Franklin, Tenn., told the more than 5,000 in Tampa. “We need to take this conference as an opportunity to really get serious about our faith in God.”

St. James was one of several artists and speakers featured in YouthLink sessions at more than one location. She and her band performed first in Tampa and left to catch a plane to Philadelphia where they would appear at the Thursday morning session there.

In Atlanta, the lead singer of Smalltown Poets observed how impressive it was that the students were eager to express their faith in an often-frightening world. “You guys don’t seem to be afraid, and that’s cool,” he said.

Teens in Philadelphia danced atop chairs and waved their arms in the air to the music of five brothers from American Samoa who sing as The Katinas. “It’s awesome to see young people coming to have fun and praising the Lord in Philadelphia,” said Jesse Katina. “It’s gotta’ be fun to serve the Lord. It’s exciting!”

While the students gathered in seven locations thousands of miles apart, satellite technology brought them together. It even focused them halfway around the world.

Standing in front of a television camera in Jerusalem, evangelist Jay Strack challenged the stateside-but-scattered audience to be “soldiers for Christ.”

Strack’s presentation began with a taped segment from Golgotha, “skull hill,” outside the ancient walls of Jerusalem, where Roman soldiers crucified Jesus on a cross.

As a camera panned the location, Strack said, “This is the very spot where Jesus died for you.”

“This isn’t just a Sunday school story,” Strack said of the crucifixion of Christ. “Jesus invaded time and space because ‘God so loved the world that he gave his only begotten Son, that whosoever believes on him shall have everlasting life.’ That’s not only life that goes on for eternity, but life that begins right now.”

During YouthLink 2000, those same teenagers will be challenged to follow Christ, now and forever, he added.

In addition to believing in Jesus, Strack challenged the teens to belong to Jesus.

“When you belong to him, you get a sudden desire to live for him,” he noted, explaining that means telling others about Jesus and submitting themselves to his leadership.

“I want you to be soldiers for him,” he urged.

A “Global Link” segment also connected participants in each of the stateside sites to each other. For 30 minutes, they watched giant screens in each arena, seeing live action from each city. They sang together as bands led praise music. They laughed together as comedians egged them on.

And they listened quietly — as quietly as tens of thousands of teens might be expected to listen — as Jimmy Draper, president of LifeWay Christian Resources, spoke to them from the Atlanta stage.

“Hundreds of thousands of Southern Baptists are praying for you,” Draper told the youngsters.

Preparation for YouthLink has spanned 10 years and involved the efforts of hundreds of Southern Baptists in the SBC agencies and state conventions, he reported.

“We did it because we believe the future impact of Southern Baptists is through you,” he insisted.

“God is going to speak to you this week in a very, very special way. You don’t have to wait until God speaks to you to answer. You can get on your knees and say: ‘God, my answer is yes. Now, what do you want me to do?'”

Draper thanked the teens for participating in YouthLink, and he especially thanked their parents and church leaders “for their courage” in allowing the young people to assemble despite millennial fears that curtailed the anticipated turnout for the event.

“God was here long before Y2K was ever a problem,” Draper declared to thunderous cheers, and he pledged that God would reward Southern Baptists and the teens for their faithfulness.

“Out of those of you at YouthLink are those whom God will use to lead Southern Baptists and Christians worldwide to victory in the 21st century,” he predicted.

Testimonies from students themselves, videotaped earlier in the day, also were part of the YouthLink experience.

Stephanie Kale, an eighth grader from First Baptist Church, Brandon, Fla., described at the Tampa YouthLink how she had accepted Christ during a summer camp. Later her father, who had been on business in Egypt, noticed the changes in her when he returned.

“He wanted the same peace I had. He decided to go to church with me,” Kale said. “I’m proud to say my dad and I got baptized together.”

“I have no doubt that during the next three days God is going to call out from this group of students those who are to lead our churches and evangelize the unreached people groups of the world,” Ross said in Anaheim, his first stop on a visit of several YouthLink sites. “God would have never called a thousand leaders to commit all or some of ten years to prepare for these three days if these days were not to have a historic kingdom impact.”

Students likewise were excited about the prospects for the remainder of the week.

Shari Smedley, 14, of Lakeside Baptist Church, McMurray, Penn., which is near Pittsburgh, said she and her family decided to make the long drive to Philadelphia only that morning, Dec. 29.

“We’re excited about what’s going to happen,” she said at the close of the session. Smedley said the worship songs touched her and she responded to a challenge by the group “foreverafter” by confessing her sins.

Jason O’Grady, 16, said he had a lot of friends and family urge him to stay home this New Year’s Eve and party, but he decided to come to Philadelphia and take a stand for Jesus Christ. “It’s incredible! I wanted time to minister and worship,” as the new millennium begins, said the member of Oak Grove Baptist Church, Churchville, Maryland.