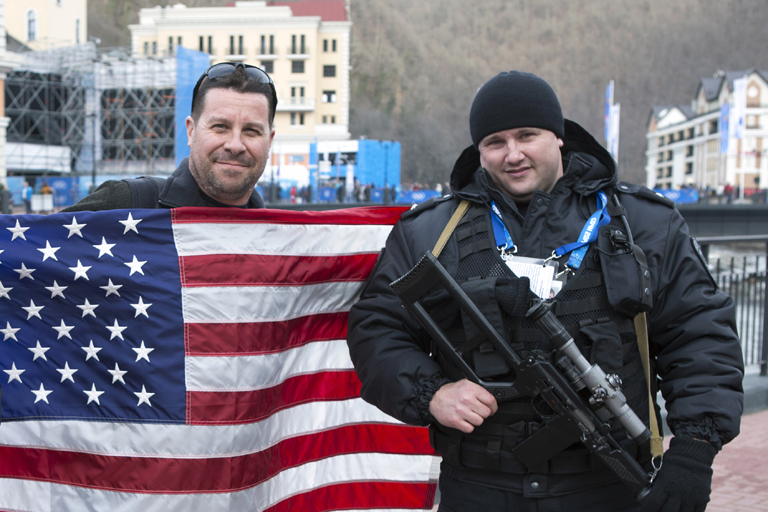 SOCHI (BP) — In the basement of a church hung a forgotten American flag, and when John Christensen laid eyes on it, he knew it was the flag he’d been praying for to take to the Sochi Olympics.

“I have a flag at home, but I just thought, ‘Lord, show me a flag. I want to have a symbol to take.’ And the very first time I walked into that church,” Christensen recalls, “I saw that flag hanging there and I told our pastor, ‘I’m taking this flag to Russia.'”

Christensen, a Missouri State Highway Patrol officer, is passionate about sharing Jesus with the world. As the world convenes for the Olympics, he has come prepared to share Jesus using whatever tools he has, including Engage Sochi trading pins, highway patrol officer patches and a flag.

“I have the calling every other believer has,” Christensen, who is a member of Strong Tower Baptist Church in St. Joseph, says. “We’re to be salt and light, we’re to go into the world and make disciples in other nations. I was really fortunate to come here, and my prayer is that many people will come to know Jesus Christ.”

Christensen says wearing the flag as a cape might sometimes be seen as arrogant, but the Olympics has provided a unique way of getting to know people from Sochi and all over the world through doing so — and as he meets people, he shares Jesus.

“I have even had a few opportunities to speak with a few [Russian] police officers and give them a patch and a pin,” Christensen says.

He is encouraged by each encounter he has, as well as by seeing other Christians sharing Jesus. As Christensen continues to make friends from around the world, he shares his faith whenever possible.

“The Lord [is using] this flag to open doors for Him and for the Gospel to be shared,” Christensen says, “for people to meet Americans and allow us to visit with them, make a connection with them, put Olympic pins in their hands and spread the Gospel.”

Christensen’s charisma and a minimal American presence in Sochi have gained him numerous interviews with worldwide television networks, celebration dances with fans from other countries and innumerable shout-outs to America.

“When we get back [to America], we are going to become nobodies again,” Christensen jested to another flag bearer who has gained attention from several news stations around the world.

As Christensen continues to share about Jesus with new friends, in conversations initiated because of a flag draped over his shoulder, he grins and declares, “I will never look at an American flag the same again.”
–30–
William Bagsby is an IMB writer based in London. For daily updates on Olympic ministries during the Games, click here.