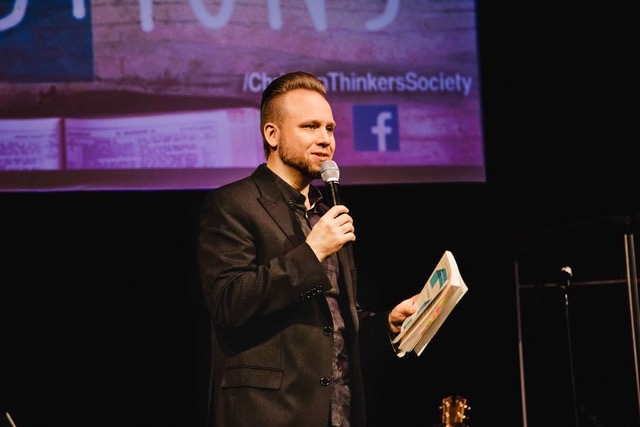 Jeremiah Johnston is a noted national speaker in the area of apologetics and a new staff member in that area for Prestonwood Baptist Church.

PLANO, Texas (BP) — Jeremiah Johnston, an apologetics expert and founder of the Christian Thinkers Society, was announced as the new associate pastor of Apologetics and Cultural Engagement at Prestonwood Baptist Church on April 24.

In addition to Johnston’s pastoral role at Prestonwood Baptist, he will also serve in a dual role as the dean of Spiritual Development at Prestonwood Christian Academy. Both positions are designed for Johnston to oversee the teaching and training of those at Prestonwood to address difficult cultural issues through an understanding of a biblical worldview.

Johnston told Baptist Press that engaging in apologetics is not just about believers defending their faith to skeptics, but strengthening their own faith along the way.

“I am thrilled that the Lord has called me to Prestonwood because we want to recover the historic legacy of a thinking church,” Johnston said.

“When we look at the historic faith, apologetics was just as – if not more importantly – used to commend the faith to believers in the church as it was to defend the faith to those outside the church. We’re not just trying to be the smartest people in the room; that’s exactly what we’re not trying to do. We’re wanting to evidence our faith and grow in our faith to such an extent that we can answer the difficult questions.”

Despite having advanced degrees from multiple universities, including Midwestern Baptist Theological Seminary, Johnston said the true ministry of apologetics belongs not to academically-trained apologists, but to local churches.

“Apologetics is not a parachurch ministry, but it should be paramount to the local church,” he pointed out.

“In my opinion, apologetics has become too parachurch-focused. I mean that we often have lone ranger apologists who are not church-centric. We have to bring this content to worship services and Sunday schools, and not just conferences. We have to put it into the very DNA of our programs.

“We (Prestonwood) want to create a truth pipeline that will encourage pastors and Christians, and we want to create a church-centric model of evangelism and apologetics for the new generation. Jesus and the truth do not change, but the challenges that are facing the church today are changing.”

Jack Graham, senior pastor at Prestonwood Baptist, said he is excited about the expertise Johnston will bring to both roles.

“The addition of Dr. Johnston and his expertise and spiritual gifting will help undergird what we instill at both the church and school,” Graham said.

“We live in an ever-changing world and a culture that is constantly shifting. As believers, we need to be firm in our foundation so we may stand strong for truth in all areas of life. This partnership will become a model for churches and schools as we seek to engage an increasingly hostile and secular culture with our biblical worldview.”

Lee Strobel is a well-known author and apologist as well as the director of the Lee Strobel Center for Evangelism and Applied Apologetics at Colorado Christian University. He and Johnston previously worked together in the apologetics department at Houston Baptist University. Strobel said he is glad to see his personal friend serving in a unique apologetics role within a local church.

“I am thrilled with Jack Graham’s vision to add the powerful and persuasive apologetic voice of Dr. Jeremiah Johnston to his Christian school and church,” Strobel said.

“My friend Jeremiah is an informed, insightful, and energetic defender of the faith, and he has a rare ability to communicate biblical truth in a clear and compelling way. I believe the addition of trained evangelist/apologists like Jeremiah is critical to every church and Christian school as a way of equipping Christians to be strong salt and bright light in our increasingly skeptical culture.”

Johnston reitereated the importance of the local church for apologetics and stated his hopes that the program Prestonwood builds will inspire other local churches as well.

“With how the culture is going today, I can’t imagine a local church not having an apologetics emphasis every week,” Johnston said.

“The church is only as strong as the people in it. We can’t have a few ‘special forces’ Christian apologists in the local church because we need every one of us. When we’re at the coffee shops, restaurants or school meetings, we all remember times when we should have spoken up but we were silent. The greatest asset of the churches is our members and that’s why we want to architect a program that emphasizes Christian thinking at every age level.”