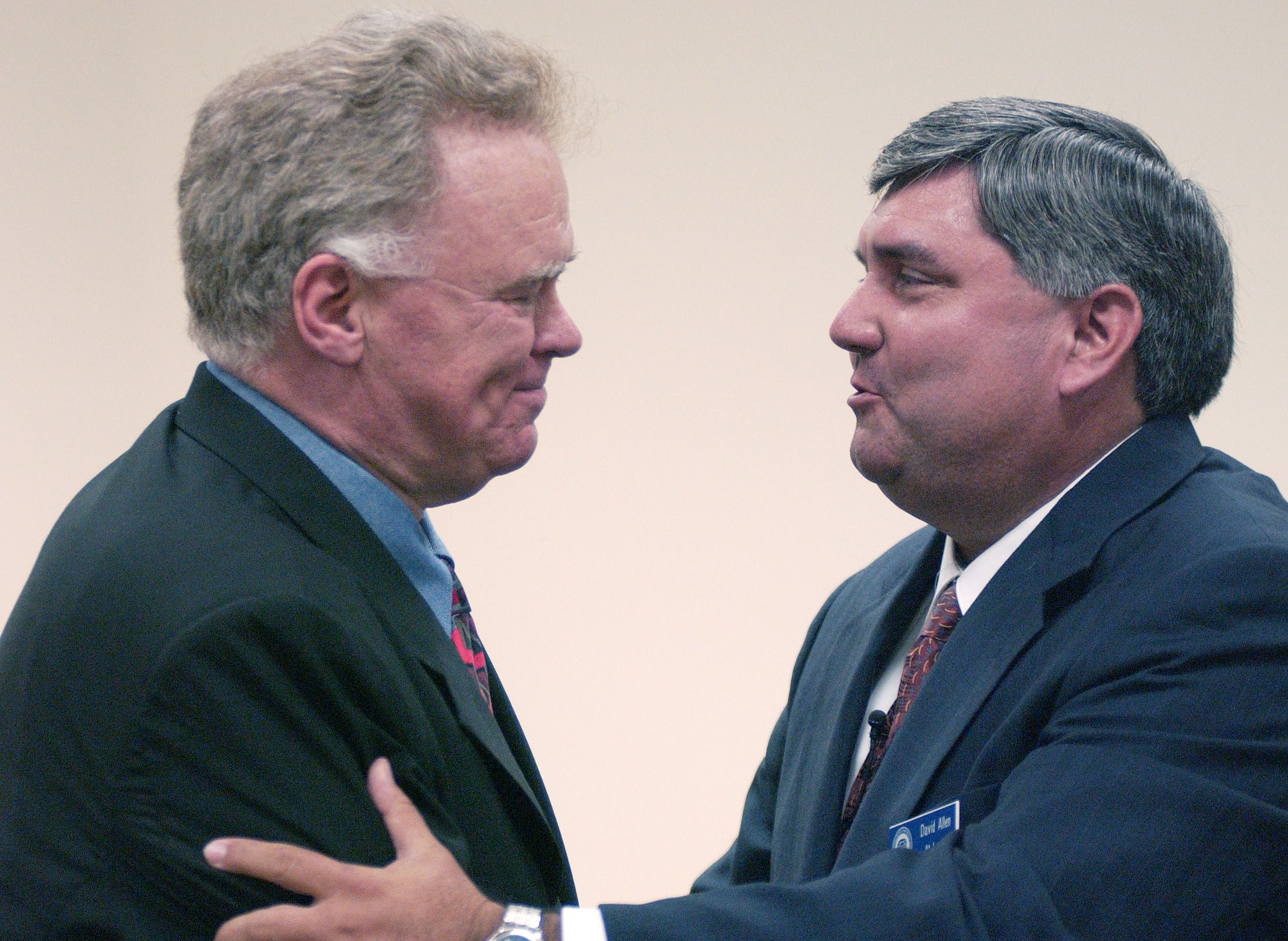 FORT WORTH, Texas (BP)–Paige Patterson accepted the unanimous invitation of the trustees of Southwestern Baptist Theological Seminary to serve as the school’s eighth president effective August 1.

In a news conference following the June 24 vote, Patterson, 60, said the transition from one seminary president to another naturally causes faculty and staff to be anxious.

“The problem is exacerbated by the fact that some of us have certain kinds of reputations that may or may not be fully deserved,” he said. He pledged, “We come to you with open arms, love in our hearts and a desire to see Southwestern Seminary be everything it ought to be for the glory of God.”

First contacted on May 15, Patterson said that in his “wildest imagination I never dreamed I would be standing here today.”

“Nor did I have any particular interest in it. When you are totally satisfied and happy and blessed of God beyond any possible way to assess it and someone says, ‘Are you interested in moving?’ the answer is, ‘No, I am not.”

His change of heart occurred on June 10 at 35,000 feet over the Atlantic Ocean, Patterson said in his letter of resignation to Southeastern Baptist Theological Seminary in Wake Forest, N.C. “God spoke decisively to my heart,” he told the media.

Patterson described the faculty of Southwestern Seminary as “exceedingly kind and gentle” in the private meeting held June 24.

“When the philosophy department went to the microphone I was temporarily stymied with fear that there would be some question about Kantian realism or something of that nature,” he quipped.

One reporter asked Patterson if he would “push for faculty changes.” The president-elect said, “It was never necessary to relinquish anyone” when he took office at Southeastern Seminary. “I cannot imagine any circumstance in which I would come in and, as you said, clean house. I would prefer instead to motivate on a much higher level.”

Patterson said the “most important” hiring criterion is that prospective faculty members “be genuine men and women of God who have learned to walk with God and know what that means. They must be good husbands or wives and good fathers and mothers. I’m more concerned about modeling those kinds of things than just about anything else.”

He said he expects faculty members to be “consistent witnesses for Christ” who “share their faith with people everywhere.”

Furthermore, Patterson said he will be looking for people who are “adequately credentialed with the appropriate terminal degrees,” who have “proven their ability in those areas and are willing to contribute to theological literature” through writing and teaching. He emphasized competence in classroom teaching “because I have a deep-seated conviction that it’s a sin to be boring.” And finally, prospective faculty must operate within the guidelines of the Baptist Faith and Message 2000.

Patterson was asked whether he would allow a woman to teach in the seminary’s school of theology. Noting that his wife, Dorothy, had served on the faculty at Southeastern Seminary teaching in the women’s studies program she developed within the division of theology, Patterson said that information provided “something of an answer.” Earlier, the board unanimously elected her as a full professor without pay while having faculty benefits.

“It would not be my purpose as a leader to do anything in the school of theology that would be something other than what I would want our churches to imitate.” Expecting that “there are ample numbers of men who are well-qualified for those positions,” Patterson said he plans to build the faculty with “God-called men.” He said opportunities arise for women to teach in the areas of Christian education, ministry to women and children as well as music ministry.

“The New Testament is crystal clear that pastors are to be men,” he said, calling for the seminary to “stay with the biblical pattern.” He affirmed his belief in “the absolute equality of essence,” adding, “It’s a question of the assignment of roles that God gives.”

Patterson also said he told the faculty of his desire for an endowed program that would place every student in a third-world mission field as a church planter.

“If that student goes to pastor a church, he’s not going to fail to talk about that missions experience and will call out the called.” Through dependence upon God during culture shock and language barriers, students “see that God does the impossible,” Patterson said. “Wherever else he goes, he’ll never forget that. Put them on the mission field. Throw them in the deep end and see if they’ll swim,” he proposed.

Patterson was not shy about admitting that he “had been a key player in the conservative movement” of the SBC when a reporter identified him as such.

“I believe anywhere that you’re asked to serve in Southern Baptist life it is a compliment of the highest possible consideration,” he said. “I only come to the assignment with a certain keen sense of my own limitations, and I certainly don’t consider it a reward given to me of any kind. I consider it an unbelievable opportunity.”

Serving as Southeastern Seminary’s president had been a great opportunity just as being asked to serve as a missionary to South America would be, he said.

“Whatever the opportunity is, it is what the Lord has provided,” he said. Patterson repeated his primary goal of attempting “to please Jesus,” adding, “and in so far as that can be done without hurting anyone, not to hurt anyone.”

Asked to describe “what is conservative enough” for him, Patterson answered, “I would say the Lord makes that decision. He’s given us His Word.”

Patterson said, “As far as I know there is no other standard of appeal than to our Lord Jesus and the Word of God.”

Patterson objected to mischaracterizations of his beliefs by some media members.

“In your articles you have said I believe in a literal interpretation of Scripture,” he said. “I wish you boys would get that straight,” he said, describing the issue as being “the truthfulness of the Bible.”

Asked to describe the kind of relationship he expected to pursue with the Baptist General Convention of Texas, Patterson said, “I fully intend to do my very best to have a wonderful relationship with anybody, regardless of his affiliation, who maintains the absolute lordship of Christ, absolute inerrancy of God’s Word and the mission of winning men and women to faith in Christ. As long as those things are there we are going to have a great relationship.”

He praised retiring Southwestern Seminary President Kenneth S. Hemphill’s willingness to lead the Empowering Kingdom Growth initiative as national strategist “at a pivotal time in the life of our convention.” Patterson added, “I’m grateful for that kind of leadership and what it provided at the seminary and will do my best to fill a pair of shoes that is quite a bit larger than my own feet.”
–30–
(BP) photos posted in the BP Photo Library at www.bpnews.net. Photo titles: CONGRATULATIONS and ROLL-CALL VOTE.