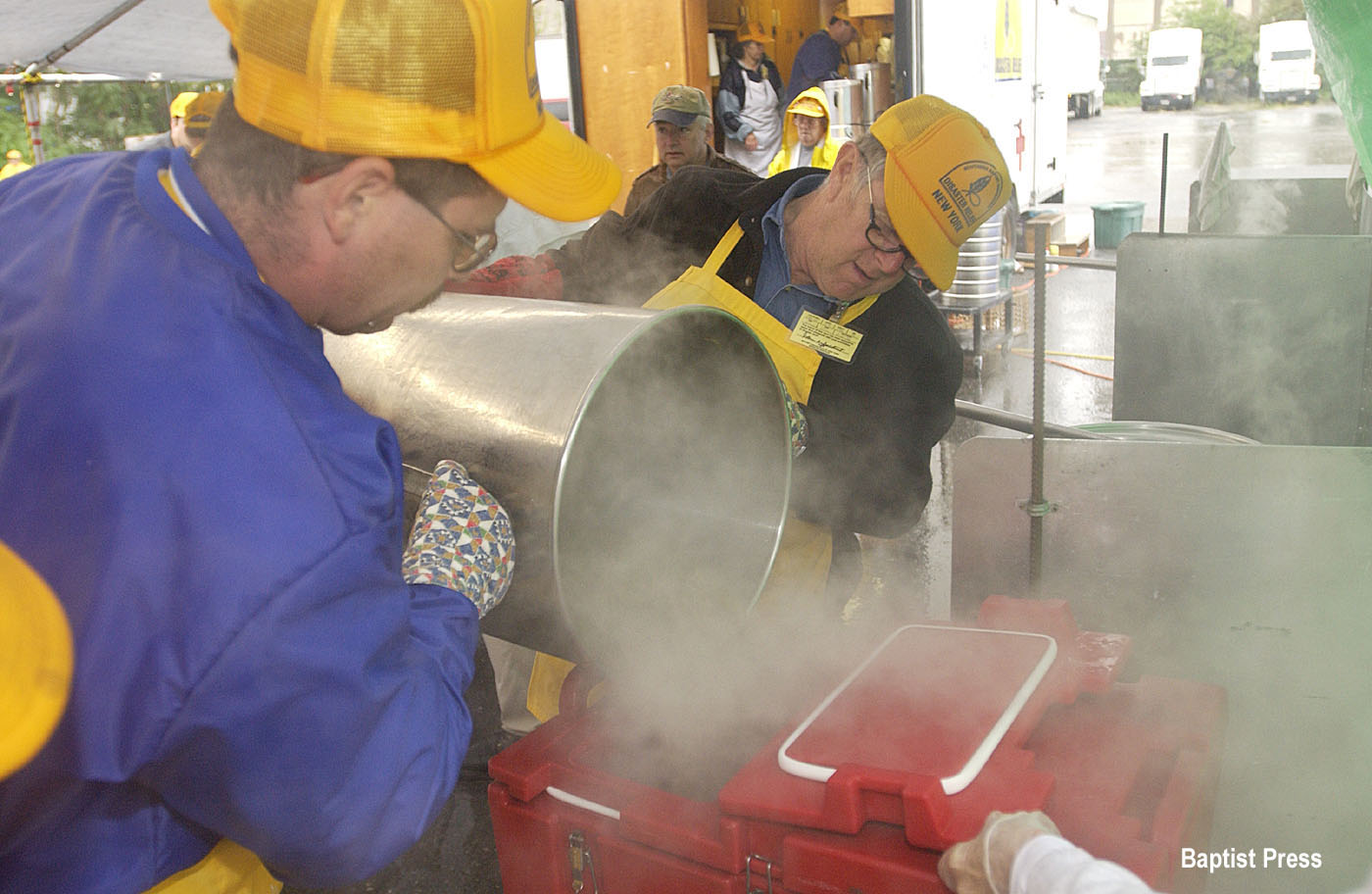 EDITORS’ NOTE: This story updates throughout and replaces the Disaster Relief story from 9/13/01.

In Washington, D.C., meanwhile, a mobile kitchen unit of 32 volunteers from North Carolina had prepared about 7,300 meals from the south parking lot of the Pentagon since the evening of Sept. 12.

The American Red Cross, which delivers meals prepared by the Southern Baptist crews, was to begin picking up the 2,500 meals Friday morning, he said. The volunteers anticipate beginning work on the evening meal as soon as they were finished.

About half of the volunteers stayed overnight at the site, some in their vehicles and some on cots in American Red Cross trailers, George said. Others stayed at Park Slope Community Church, a Southern Baptist congregation in Brooklyn. Like other rescue and relief workers in the city, they had coped with the rain, he said, “but the volunteers are great. … They’re doing heroic deeds under stressful situations, and I think Southern Baptists can be proud of them.”

Southern Baptist crews will be the major supplier of American Red Cross meals for rescue and recovery workers in New York, said Joel Phillips. Phillips is based at the North American Mission Board’s Volunteer Mobilization Action Center, located at the agency’s offices in Alpharetta, Ga.

A total of eight Disaster Relief units have been dispatched to New York, with an additional three units on standby or alert status. Additionally, two teams of volunteer chaplains from South Carolina and Oklahoma were to begin working in Manhattan Sept. 15, meeting needs for counseling and pastoral care.

The South Carolina team of 11 chaplains was going to two areas, said Bob Vickers, director of chaplaincy for the North American Mission Board. One group would share with individuals at The Compassion Center, a National Guard armory where family members are gathered. Scores of others with missing friends and loved ones have congregated outside.

“We were down there last night, and we found those people are really desirous of just having someone to talk to,” Vickers said.

Another group will be available in the Union Square, which Vickers said is emerging as a location for memorials.

The Oklahoma team of chaplains is notable because of their experience in crisis counseling following the 1995 bombing of the Murrah Federal Building in Oklahoma City, Vickers said.

“My hope is that we’re going to be able to take them, with their expertise, down closer to the site,” Vickers said. “We would like to be able to establish kind of a presence … and hopefully these chaplains will be just instantly aware of what the greater needs down there may be and how they could most effectively interface with the people.”

Mickey Caison, national coordinator for Southern Baptist Disaster Relief, said by telephone from Manhattan that the scene was unlike any he had experienced before.

“The leadership teams that I am use to working with are very sedate, very concerned about how to accomplish the job in the environment we are in right now,” Caison said. “We are having to scramble to put together a plan and strategy to accomplish our mission in the absence of the resource that we normally have. It will be quite a challenge to make that happen.”

Additional ministry efforts by Southern Baptists include an attempt by the Baptist Convention of New York to locate a linguist to work with American Red Cross in communicating with other nationalities, said J.B. Graham, executive director of the convention.

A prayer ministry team in Oklahoma also is preparing handwritten notes of encouragement for the relief workers, he said, which would be distributed through the chaplains.

“We also have had e-mails and condolences from foreign Baptist conventions such as Austria, New South Wales and Singapore, all assuring us of their prayers,” Graham added.

Both Caison and Vickers described a population that still wanders around largely in shock, with what Vickers called a “1,000-mile stare.”

“There is an aimlessness, a listlessness about how to approach everything,” Vickers said. “A lot of heads shaking in disbelief. You get the idea that they are trying to continue on with life, yet realizing a real impossibility of putting this behind them right now.”

Southern Baptist Disaster Relief volunteers, numbering more than 20,000 nationally, consistently have been the largest provider of hot meals for distribution during American Red Cross disaster relief operations. The network is coordinated nationally by the North American Mission Board in cooperation with state Southern Baptist conventions.

Donors from 15 states have already given several thousand dollars for the disaster relief response online at www.namb.net. One hundred percent of those gifts will be used for disaster relief in the field, not for administration.

Checks designated for Disaster Relief also may also be sent to NAMB by mail at 4200 North Point Parkway, Alpharetta, GA 30022.
–30–