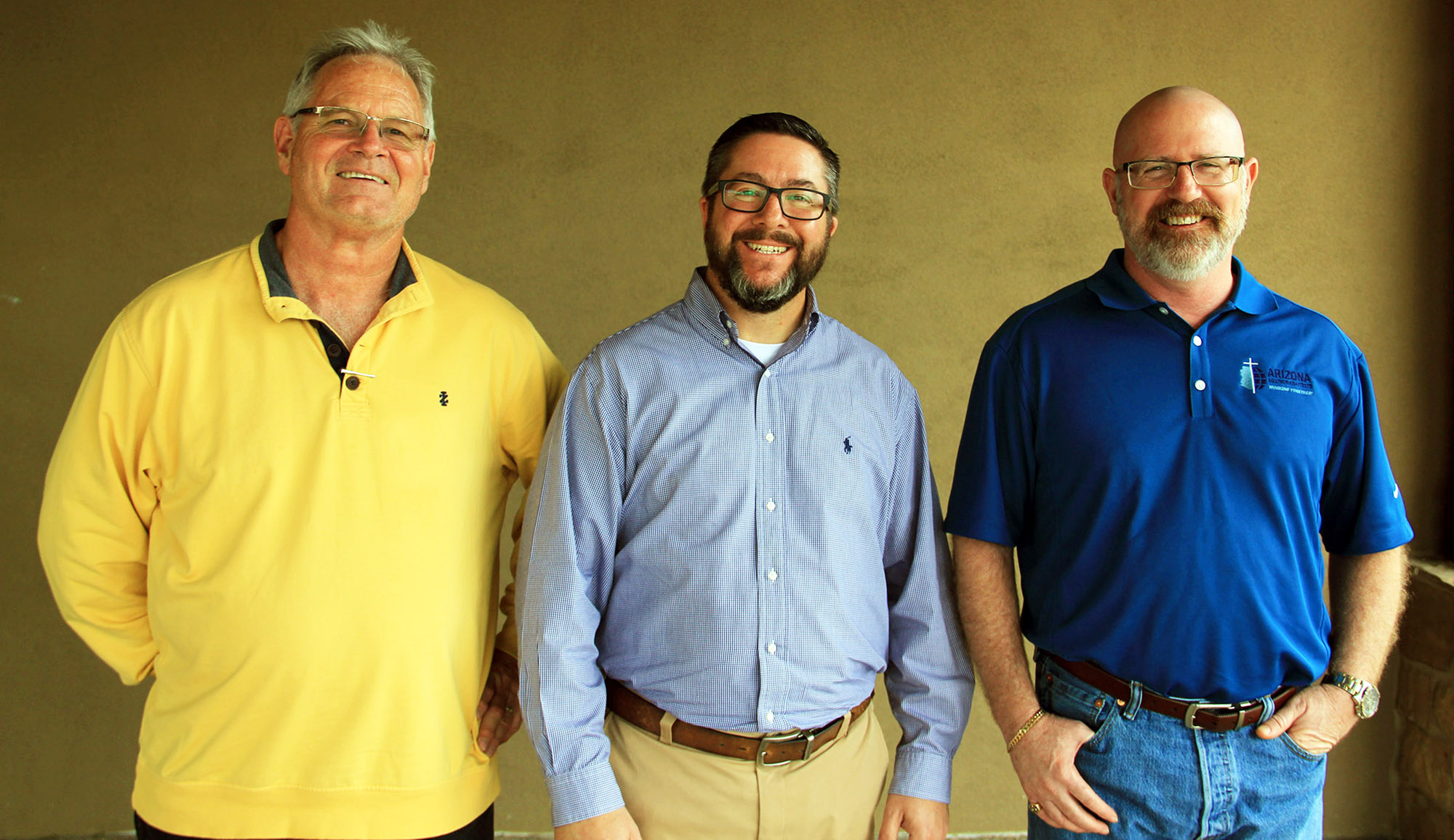 “One Voice in Prayer … in Witness … in Mission” was the theme of the meeting held at Heart Cry Church in Queen Creek, Ariz., Nov. 15. It was attended by 278 messengers and 89 registered guests from 118 of Arizona Southern Baptists’ 464 churches.

The Cooperative Program budget allocates $1,246,032 or 36 percent — an increase of 2 percentage points — to the Southern Baptist Convention for national and international missions and ministries.

The percentage increase represents another step in reaching Arizona Southern Baptists’ Centennial Vision goal of giving 50 percent of CP receipts to missions outside the state through the SBC by 2028. It’s the sixth straight year for an increase, resulting in a total rise of 10 percentage points. The remaining CP budget will be distributed as follows: Arizona Southern Baptist Convention, $1,730,600 or 50 percent, a decrease of 2 percentage points from 2019; Arizona Baptist Children’s Services & Family Ministries, $242,284, 7 percent; and the Arizona Campus of Gateway Seminary, $242,284, 7 percent.

Income sources in the AZSBC operating budget beyond Cooperative Program giving by Arizona churches include $1,077,514.50 from the North American Mission Board (NAMB), $54,996 from LifeWay Christian Resources, and $335,650 in other revenue.

“We now give more to national and international missions through the Cooperative Program than we receive back in assistance for church planting from North American Mission Board — that even includes the salaries of those who serve in our state,” said AZSBC executive director David Johnson. “For years, we have said we are receiving back more than what we give. We can’t say that anymore. We’re standing on our own two feet, and that’s a good place to be.”

Johnson presented his annual Centennial Vision report, updating messengers on Arizona Southern Baptists’ progress on goals guiding their work through 2028 and then looking forward to 2020.

— A six-year low in the number of closed churches, with seven in 2018;

“These goals are so God-sized and so daunting that it’s going to take an act of God, or a movement of God, to be able to accomplish those,” he said. At the initiation of AZSBC president Ashley Evans, 2020 has been designated as a year of prayer, he explained. A website has been established at pray2020az.org, and a prayer guide — Praying the 4 P’s (prayer for pastors, God’s people, God’s providence, the perishing) — is available.

“Let’s spend a year of prayer, praying that God would use us to reach our state and to reach our world with the Gospel,” Johnson said.

The AZSBC offices and Gateway Seminary Arizona Campus moved from Scottsdale to Phoenix in January, and building renovations are now complete, Johnson reported. The Scottsdale property was sold to a real estate developer in December 2018 for $2.5 million. The new facilities in Phoenix were purchased for $1.2 million.

Renovations “took a little longer and cost a little more than we anticipated.” Johnson said. However, more than $550,000 has been set aside “for ongoing maintenance and ongoing repairs that need to be done, so that mission dollars never need to be spent on maintaining or improving our building…. We want mission dollars to go to the field, in Arizona, in the U.S., North America and around the world,” he said.

Henry joined the convention staff as Baptist Student Ministries director at Arizona State University more than 32 years ago. He became the AZSBC leadership facilitator in 2001.

Belflower, who joined the convention staff in 1987 as the first director of the new work church building and support department, became church planting facilitator in 2001.

“Over these years, he’s worked on everything from buildings to Baptist Men to loans to church planting and in many other capacities across our state,” Johnson said of Belflower. “He has also been a friend to me and a blessing to me in many ways, and we’re so thankful for his service.”

As a NAMB employee for 30 years, Belflower was also recognized on behalf of NAMB president Kevin Ezell by Steve Bass, assistant to the president for convention and associational relations at NAMB and former AZSBC executive director.

“[Ken Belflower] knows his neighbors by name,” Bass said. “He knows their spiritual condition, and he prays for them when they walk in their neighborhood. That’s why I’ll follow him anywhere he leads because of that integrity.”

Henry and Belflower will continue to serve Arizona Southern Baptists in their retirement, Johnson said. Each will help with ongoing projects on a contract basis.

“Pray for the revitalization of churches. Pray for healthy churches in Arizona, and pray for many more churches to be planted,” Johnson said.

Also in his report, Johnson:

— Encouraged churches to participate in NAMB’s “Who’s Your One?” evangelism initiative and baptism Sunday in September. Messengers were invited to add the names of their “ones” to a banner that will travel around the state.

— Reported that an AZSBC Caring Well team is working to help churches respond better to sexual abuse and offered the book Becoming a Church that Cares Well for the Abused at no cost to all AZSBC churches.

‘Pray for all peoples’

As part of his report, Johnson invited Todd Lafferty, who grew up in Tucson and was elected executive vice president of the International Mission Board in February, to speak.

“As you pray for the perishing this next year in 2020, pray for all peoples,” Lafferty said. Pray for people from different nationalities, socioeconomic backgrounds, religious backgrounds and worldviews, he said. Also, pray for the powerful — leaders in countries where religious persecution is occurring, and pray for an “umbrella of peace … so that we can continue to get the Gospel out,” he said.

“We pray and we proclaim,” Lafferty said. “We have a big task to do, and all of us have a part to play in that task.”

He closed with two more prayer requests: “Pray for more laborers to go out into those harvest fields, and then ask God what part you will play in fulfilling the Great Commission. That may be right here in this place; it may be going to the other side of the world.”

A race of endurance

In the closing message, Ed Litton, senior pastor of Redemption Church in Saraland, Ala., and a former Arizona pastor, preached from Hebrews 12, explaining that God has called us to run a race of endurance. With Jesus as the trailblazer and the Gospel as the target, you are to run with perseverance the race God marked out for you, because Jesus is the joy set before you, he said.

The unnecessary and the sinful will throw us off, Litton said. The unnecessary “is a good thing that becomes a bad thing because it distracts you from the main thing,” he explained.

God uses discipline to prepare us for the race, Litton said.

“Pastors and leaders, whatever problem you’re facing, stop denying it,” he said. “Stop ignoring it, and ask yourself a question: Why has God let this problem in my life? Could it be that He’s disciplining me in righteousness?”

Finally, he said, there is victory.

“Some of you think that you’re out of the race, and you’re not out of the race,” he said. “You have suffered powerfully and profoundly, but I’m telling you, God still has the race for you to run. Finish strong!”

Prior to the afternoon session, Arizona Southern Baptists participated in a mission fair and a morning Pastors’ Conference, along with lunch cooked by Arizona Southern Baptist Disaster Relief. The day before, many attended Engage AZ 2019, a conference providing explanation, motivation and practical examples of evangelism through community connection and engagement

Next year’s annual meeting will be Nov. 13 at CalvaryPHX in Phoenix.
–30–