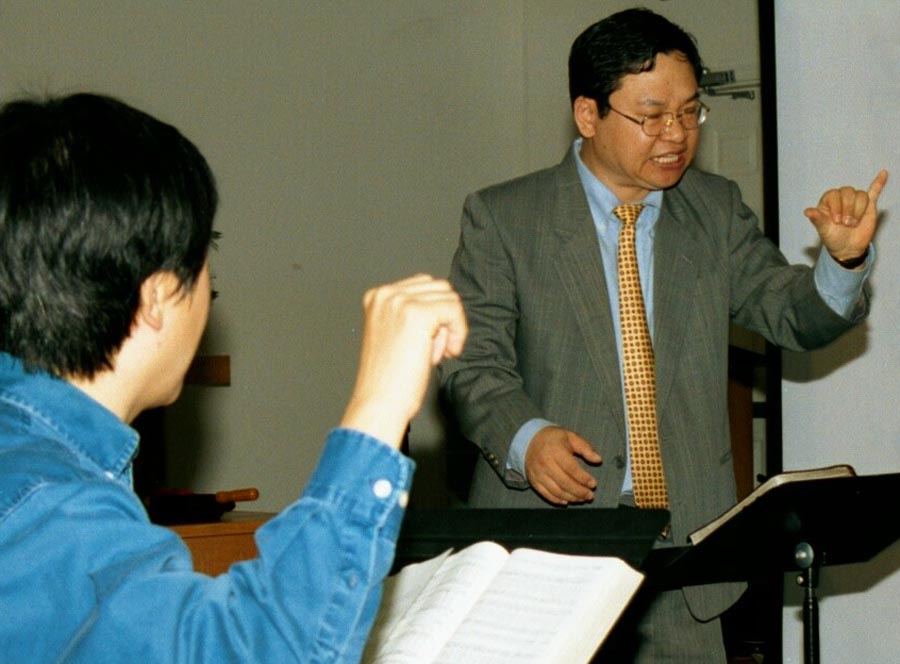 WHEATON, Md. (BP)–“Faith comes from hearing the message, and the message is heard through the words of Christ,” the Bible says in Romans 10:17. But what if one can’t hear?

That’s the issue Chang Hwang deals with. Hwang is deaf. And his passion is to reach other Korean deaf people for the Lord.

Hwang pastors the Deaf Baptist Church of Washington — the first and only church for deaf Koreans in America. The eyes are the ears of the deaf, he said through his new secretary, Joyce Kim, who interpreted for this interview. So, in a visual way Hwang reaches out to the deaf community.

Hwang started the church last August. It meets at 4 p.m. every Sunday at Hanuri Baptist Church’s facilities in Silver Spring. The congregation mingles and greets each other. Songs are “sung” through signing. People are ushered into the presence of God through the music, not because they hear it, Hwang said, but because the expressions are large, fluid and exaggerated and the facial motions are different. It’s recognized as a holy expression.

The sermon is signed in both Korean and American languages and is printed on a projector in both languages. Hwang offers an alter call at the end.

Reaching the deaf, Hwang signed, is different because they have never heard the gospel before. It isn’t as easy to communicate it to them, so he is sharing a little at a time. But he sees the effect. At a recent worship service, one man worshiped with tears running down his face.

After worship each week, Hwang’s wife, Kyunghee, offers food she has prepared to everyone who attends. Most don’t have a lot of money. The majority are college students at Gallaudet Deaf College. The feeling is comfortable and they eat with chopsticks; the fellowship, Hwang said, is very important to everyone there.

Hwang also leads a Bible study on Wednesdays at his office and works on his tape ministry throughout the week with volunteers from the church who are available to help.

Hwang, who became deaf as a small boy, grew up in Korea and began attending a Christian church when he was in the third grade. It was a fun social time, he recalled. When he was in the ninth grade, he committed his life to Christ. A pastor was signing about God’s forgiveness and Hwang realized he was a sinner in need of mercy. Hwang gave his heart to Jesus.

His face lit up as he signed and spoke in Korean, “I received joy in my heart. I said, ‘What can I do for you, Lord?'” Hwang said God called him to minister to the Korean deaf population and he obeyed.

While in Korea, Hwang met his wife, Kyunghee, a fashion designer and seamstress. They have two daughters, Meehye, age 12, and five-month-old Suyeon. Meehye, who is not deaf and is beginning to speak in Korean and English and to sign in both languages.

Hwang came to America to attend college and learn about communicating to the deaf, realizing there was little information in Korea about ministering in that unique way. He received his master of divinity at Liberty Baptist Theological Seminary.

His passion shows in his face and in his office. Hundreds of videotapes line the shelves. The tape ministry is a big part of his outreach, not only to the church and deaf community in the area, but all across the United States. Hwang signs his messages and has them recorded with a digital camera.

Thus, a portion of his office is taken up by electronic equipment and computers to help him with his video projects. An organization called the Korean American Association of Deaf in Atlanta gets frequent requests from deaf churches that need ways to minister to the Koreans in their congregations and communities. Those messages are forwarded to Hwang, who sends his tapes. Additionally, the tapes provide Hwang and his congregation an opportunity to share the gospel with friends.

The church has one church in the District of Columbia Baptist Convention as a sponsor and is seeking others to begin providing a pastoral salary along with money to buy more tapes to keep the ministry going.

Hwang is attempting to network with pastors in the community but communication has, obviously, been a big barrier. He hired Kim in March to help him in the office and to help translate for meetings.

His vision is big and his excitement is contagious, without words. With the right resources, Hwang and members of the Deaf Baptist Church could very well begin to help increasing numbers of deaf Koreans grasp the gospel with their eyes and begin to spread the word with their hands.
–30–
(BP) photos posted in the BP Photo Library at http://www.bpnews.net. Photo titles: VISUALIZING THE GOSPEL, SIGNS OF FELLOWSHIP and CHANG HWANG.