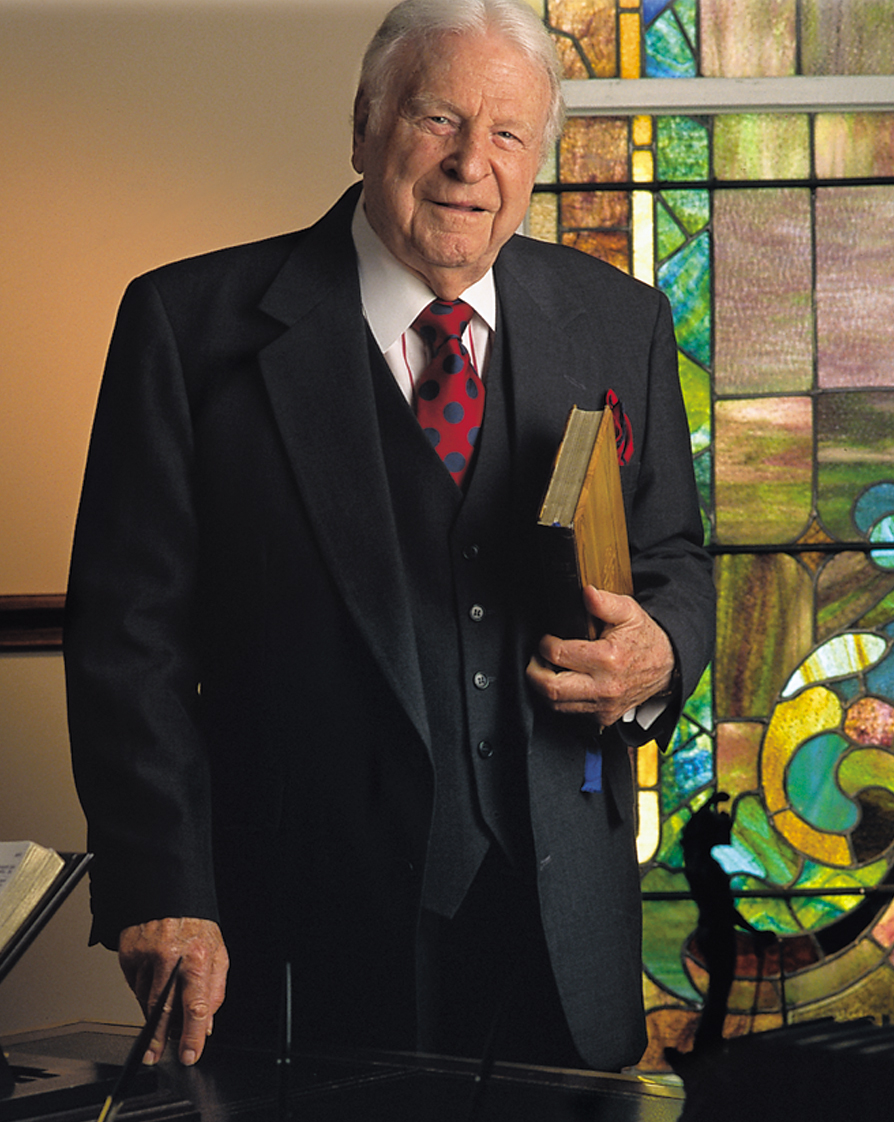 DALLAS (BP)–W.A. Criswell was a legendary Texas Baptist pastor who influenced a generation of Southern Baptist preachers to preach confidently and faithfully the Word of God and those who knew him said he was a “giant of the land.”

Criswell, longtime pastor of the First Baptist Church of Dallas and founder of Criswell College, died in the early morning hours of Jan. 10 in a private residence. He was 92.

He served as pastor of one of the nation’s largest Southern Baptist congregations from 1944 until 1991 when he was given the title of senior pastor. He had held the title of pastor emeritus since 1994.

He is survived by his wife, Betty; daughter Mabel Ann; and two grandsons.

“Dr. Criswell loosed from port at the home of Jack Pogue, a beloved and trusted friend and son in Christ,” Patterson said. Criswell led Pogue to the Lord 30 years ago. “We rejoice today for Dr. Criswell even as the Church of our Lord Jesus contemplates the loss of the greatest preacher of our generation.

“Mr. Pogue held his hand and read to him the familiar words of Philippians 2 and John 14,” said Patterson from his home in North Carolina.

“In every way, Dr. Criswell was a one-of-a-kind man of God,” Chapman told Baptist Press. “He was an unexcelled preacher, an unequalled visionary, an unswerving champion of the truth and an unfailing leader of influence.

“From his conversion to Christ, to his call to preach as a youth, to the very end of his public ministry, Dr. Criswell has contributed to Southern Baptists and to the Kingdom of God as a wise and compassionate pastor, fervent evangelist, scholarly preacher, practiced theologian, farsighted educator, caring mentor and steadfast denominationalist,” Chapman said. “This man of God will be remembered, and he will be missed.”

“I consider him to be a mentor as did thousands of pastors,” Merritt said in a telephone interview. “He was the father of the conservative resurgence of the Southern Baptist Convention and will be known for his stand on the inerrant word of God.”

Merritt said he developed a relationship with Criswell in 1988 when he was being considered to be Criswell’s co-pastor. “I got to see Dr. Criswell up close in a way that few people do,” Merritt said. “I was just in awe of what a great man of God he was.”

Evangelist Billy Graham said Criswell would be remembered for his “electric” preaching style.

“It is almost impossible to evaluate the life and ministry of W.A. Criswell,” Graham said. “He had a multiplicity of gifts. He had one of the most loving hearts I have ever known.”

Graham said Criswell’s personal counsel and love meant more than he would ever know.

“He was anointed by the Holy Spirit in an unusual way,” Graham said. “In recent years I did not see him often, but the memory of years past had a spiritual impact on me.”

“This Thursday morning was Dr. Criswell’s coronation day as he slipped from the side of his longtime partner in ministry, Jack Pogue, to look upon the face of Christ in glory,” Hawkins said. “We have all lost a mentor and icon of the faith and I have personally lost a loving prayer partner. It can be said of him what was said of good King Josiah, ‘Before him was no king like him who turned to the Lord with all his heart and soul and might … nor after him did any arise like him.’ We shall look forward to seeing him again ‘in the morning.'”

James T. Draper Jr., president of LifeWay Christian Resources of the SBC, was an associate pastor at First Baptist, Dallas, from September 1973 until November 1975. He said he was grateful for his friendship with Criswell.

“He was one of the easiest men to love I’ve ever been around,” Draper said. “He had a brilliant mind and a unique and passionate way of preaching. He is a great testimony to the fact that God honors the preaching of his Word. He faithfully presented the Word as he understood it, and God honored that.”

“Although he was a national figure, he was also for decades the preeminent Texas Baptist,” Richards said. “Through many changes he was senior statesman for our entire denomination. You could say he pastored the recent reformation of the Southern Baptist Convention.”

R. Albert Mohler Jr., president of Southern Baptist Theological Seminary, where Criswell graduated, said it will be hard to imagine Baptist life without him.

“He was larger than life and his influence will continue long after his death,” Mohler said. “His pastorate at First Baptist Church in Dallas set the pace for the rise of great multi-thousand-member congregations all across the nation.

“He was a proud graduate of The Southern Baptist Theological Seminary, and he was by any measure the most famous graduate of this school in the 20th century,” Mohler added. “Southern Seminary will be forever proud of this great graduate. He was a great encourager to me as president.”

“Dr. Criswell gave leadership, voice and inspiration to the restoration of the Southern Baptist Convention to its biblical roots,” Pressler told Baptist Press. “I am so glad he was able to see the victories for which he so earnestly prayed.” Nancy Pressler agreed with her husband’s remarks, adding, “We mourn the loss of a loving friend who was so kind to us, but rejoice that he is with his Savior.”

Criswell’s service to the Southern Baptist Convention was historic. He is known as the patriarch of the “conservative resurgence,” returning the SBC to its Bible-believing roots.

Twice elected president of the SBC, in 1968 and 1969, during the 20 years that followed he was perhaps the most popular preacher at evangelism and pastors’ conferences in America while also preaching extensively to mission fields worldwide.

His denominational involvement also included serving as trustee of the Baptist Sunday School Board [now LifeWay Christian Resources], Annuity Board, Baylor University and Dallas Baptist University, as well as Baylor Health Care System and the Baptist Standard newspaper of Texas.

Criswell authored 54 books, including many collections of sermons he delivered while preaching through books of the Bible. Others dealt with issues relevant to the times in which he lived, such as the case against evolution in “Did Man Just Happen?” In “Why I Preach That the Bible Is Literally True” and “The Bible for Today’s World,” he addressed the movement away from belief in an inerrant Bible. “The Holy Spirit in Today’s World” dealt with the emerging charismatic movement.

From the pulpit Criswell developed a preaching-teaching ministry that inspired a generation of Southern Baptist preachers in the practice of expository preaching.

Patterson credited Criswell with a major contribution to the life of Baptists and other free church evangelicals through his emphasis on exegesis and expository preaching. “Without making any effort to imitate the precise style of Dr. Criswell, hundreds of preachers now take very seriously the task of carefully expounding the Bible,” Patterson said in an essay honoring Criswell’s 50th year of ministry.

“Other influences have certainly contributed to this change of preaching habits, but foremost among those influences would be the example of Criswell and the stupendous popularity that he has enjoyed across the years in Baptist circles,” wrote Patterson, a former president of Criswell College in Dallas.

Patterson cited the use of poignant illustrative materials, often poetic, to illumine otherwise obscure points, as well as “adroitness in the use of vocabulary” as distinctives of Criswell’s preaching style.

Wallie Amos Criswell was born in Eldorado, Okla., in 1909. The dust bowl drove the Criswell family to the Texas panhandle on the border of New Mexico. At age 10 he professed faith in Christ at a revival meeting. By the time he was 12 he made a public commitment of his life to the gospel ministry, delivering his first sermon as the funeral message for a beloved pet dog.

Criswell was licensed to preach at age 17 and held student pastorates at Devil’s Bend and Pulltight, Texas, during his college studies at Baylor University. After completing his master of theology and doctor of philosophy degrees from Southern Baptist Theological Seminary in Louisville, Ky., Criswell married Betty Harris, the pianist of the Mount Washington Baptist Church where he pastored.

Called to Dallas’ First Baptist Church in 1944, where he followed the beloved George W. Truett who had pastored there 47 years, Criswell retired as senior pastor in 1995 after half a century of service to that church. He continued serving as chancellor of Criswell College that he founded in 1970.

Criswell’s concern for the inner city led to support of more than 15 mission chapels staffed with pastors and to sponsorship of Dallas’ largest shelter for the homeless, the Dallas Life Foundation.
–30–
Tammi Reed Ledbetter contributed to this story.