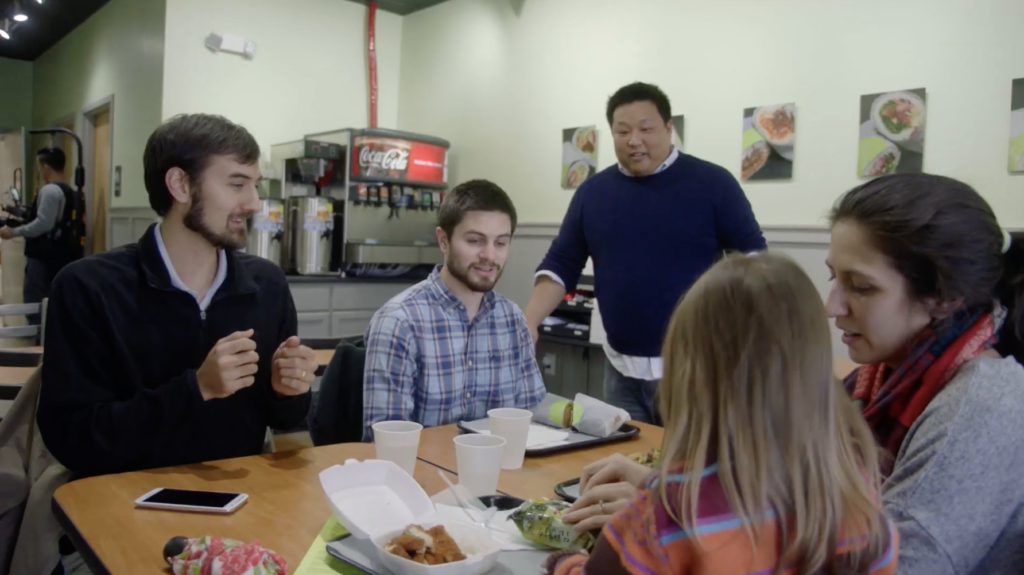 Sushiōki has received several honors in its relatively short life span and notice from media for its efforts in providing a living wage and life skills for refugees. Lawrence Yoo, standing, co-founded the restaurant in 2018 alongside Jeff Carter, an elder at Waypoint Church in Durham, N.C., where Yoo is pastor.

DURHAM, N.C. (BP) – The employees at Lawrence Yoo’s restaurant are hired with the intention of getting them to leave.

It may come across as an unorthodox business plan. But in 2018 Yoo and Jeff Carter co-founded Sushiōki, best described as specializing in sushi/burrito fusion, to not only be a successful business but provide a living wage and life skills for refugees. Yoo, pastor of Waypoint Church in Chapel Hill, where Carter is an elder, describes it as an extension of the church’s ministry to the refugee community.

“[Refugee work] was an early part of our DNA at Waypoint because each of our small groups was also a Good Neighbor team,” Yoo said. “That meant that when a refugee family came to the United States, a Good Neighbor team would meet them at the airport, furnish their apartment and live life with them for the next year. That built amazing relationships with a lot of refugee families.”

The area called The Triangle – located between the North Carolina cities of Durham, Chapel Hill and Raleigh – is home to several large refugee resettlement organizations such as Catholic Services, Samaritan’s House and World Relief, of which Yoo served as a board member. In its time, Sushiōki has had workers from numerous countries, including Iran, Iraq, Afghanistan, Congo, Eritrea and Sudan.

Finding a job is important for refugees, said Yoo, who is also a new member of the SBC Executive Committee. But even more important is finding one that understands a refugee’s situation.

“They may have four kids. They’re unfamiliar with how to navigate the local transportation system. It can be difficult for them to understand how to fill out forms. I wanted them to have a place that provided a living wage while also teaching them how to live here,” he said.

Planted in 2014 through the Summit Network and The Summit Church in Durham, Waypoint was looking for a permanent meeting space when its leadership met with those from Journey Church at Southpoint, formerly Farrington Road Baptist Church. When Journey Church agreed to sign over its property and be adopted by Waypoint, both groups benefited.

“Now instead of a church just filled with young people, we had grandparents in the congregation,” Yoo said. “We just did a celebration for one member’s 90th birthday and heard her incredible testimony on video. One of the former pastors at Journey Church, Jim Greenlee, is our pastor emeritus. It’s been an incredible model I hope and pray for Baptists to see.”

Sushiōki’s concept came out of Yoo’s fondness for gim-bap, a Korean-style sushi roll snack and travel food (no raw fish) made by his mother. Before his mother could cut it into standard sushi slices, though, her son would often snatch it up and dig in burrito-style.

In San Jose, Calif., he had seen a restaurant that combined sushi – held like a burrito – with local Latin flavors. Yoo described Sushiōki as a combination of “Korean and pan-Asian with a little bit of Southern flair.” The restaurant’s name, he noted, literally means “big sushi.”

“We wanted to provide fun, healthy, fresh food for a fast, casual price and experience,” he said.

Others have noticed. In 2018, viewers for local news WRAL voted Sushiōki 2nd place for Best New Restaurant and 2nd place for Best Sushi Restaurant. WRAL also produced its own piece on Sushiōki as did PBS. Last week, Yoo said, it placed at No. 5 on Yelp’s Top 50 Places to Eat in the Triangle.

And mirroring another well-known fast-food restaurant, Yoo encourages customers to eet mor Sushiōki Monday through Saturday, because they’re not open on Sunday.

Success can be attributed to honoring God in their business, but it also needs hard workers. That’s an ingrained characteristic Yoo has witnessed among refugees and one that propels them for the day they leave Sushiōki.

“Our favorite thing is when they go get jobs after us,” he said. “We work with them on their resumes and get them ready for future success. That includes knowing how to work with bosses and improve language skills.

“While they’re here we talk about budgeting and credit scores. If they have to miss work because their kids have a doctor appointment or something going on at school, we work with them on that.”

One of the first hires Yoo and Carter, who is also a pharmacist at Duke University, made was an intern whose job was to get to know employees and share the Gospel. Her fluency in Arabic is a must, as many of those hired at the restaurant are Muslim.

Several from Afghanistan have come through Sushiōki. The violence in that country and recent events in the news have, of course, left an impact.

“They’re heartbroken,” Yoo said of his employees. “Many think their families are dead.”

Just as Waypoint’s Good Neighbor teams and refugees share life together, so do the restaurant’s employees, refugee or not. It happens whether their families are in the U.S. or a war-torn region on the other side of the world. Sharing life includes the successes as well as the heartbreak.

“The church’s director of outreach, Joy Mikhail, is from the Middle East and speaks fluent Arabic,” Yoo said. “She’s been in touch with several from Afghanistan during this time. At our staff meeting this week she was absolutely broken by it all.

“We’ve known translators who worked with the U.S. military. One of our employees worked at the embassy in Afghanistan. It’s all very personal for us.”

NOTE: Joy Mikhail’s last name was mispelled in the original version of this story.