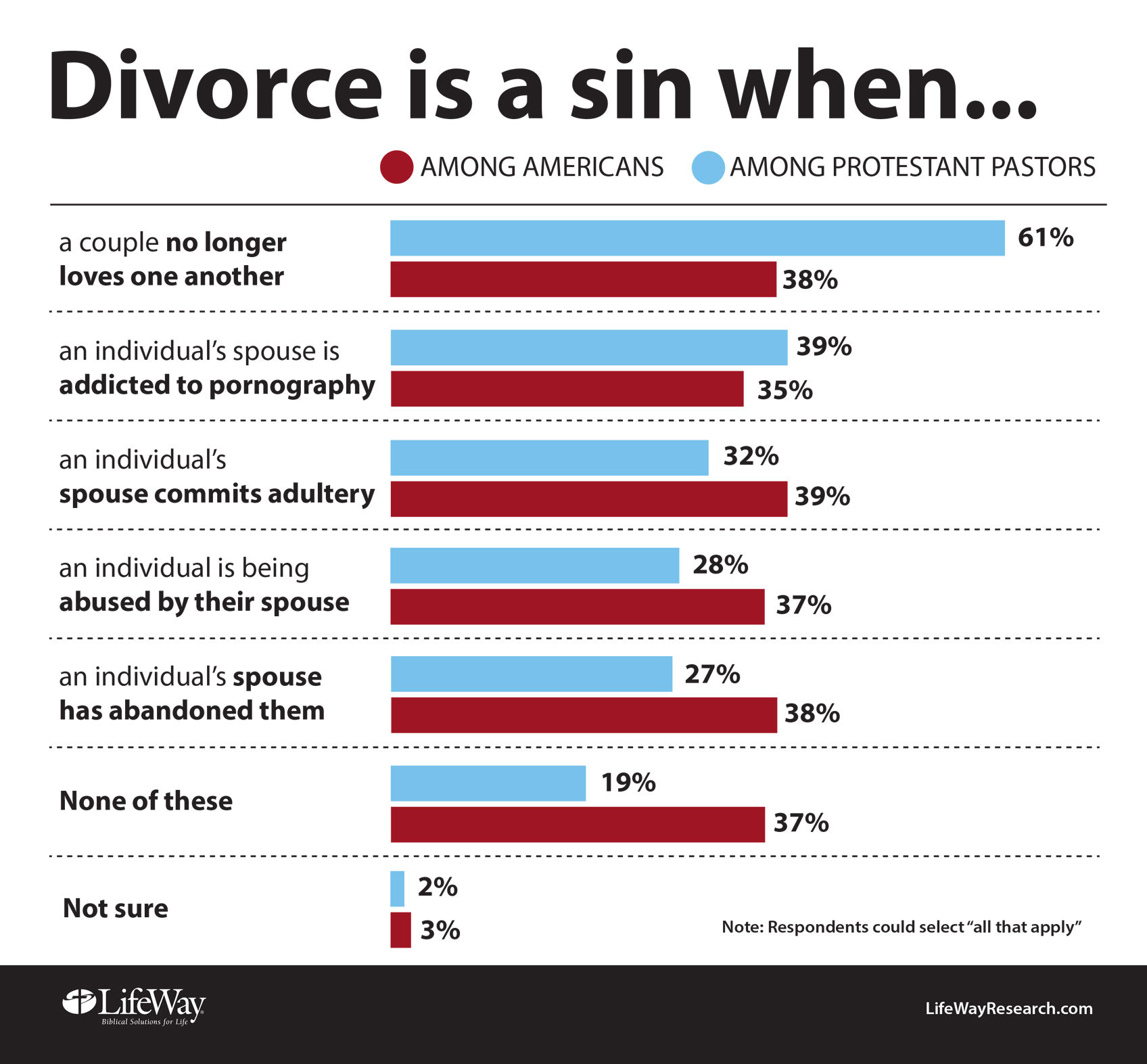 NASHVILLE (BP) — Pastors believe not all divorces are created equal, but for many Americans any reason is as good as another, a new study shows.

“Pastors make a distinction about the rightness of a divorce based on the reasons behind it,” said Scott McConnell, vice president of LifeWay Research in Nashville. “They want to account for the parts of Scripture that speak of possible rationales.”

However, Americans view virtually all reasons for ending a marriage in the same moral light.

“About one in seven Americans are saying divorce is a sin in all of these cases, more than a third don’t think any of these would be a sin, and almost half believe some circumstances would be sinful, but not others,” McConnell said.

In a separate phone survey of 1,000 Protestant pastors, less than a third want to classify as sinful an individual divorcing their spouse for adultery (32 percent), abuse (28 percent), or abandonment (27 percent).

Pastors are more likely to call divorce a sin when a couple divorces over a pornography addiction (39 percent), and because the spouses no longer love another (61 percent).

In their views on divorce, Protestant church members are much more closely aligned with the average American than with their pastor. Virtually the same percentage of Protestants believes a divorce is sinful when it is over adultery (44 percent) or an end to their feelings of love (46 percent).

Differences also exist between Americans from different regions of the country. Those in the Northeast and those in the predominately Protestant South are more likely to consider the various possibilities as sinful compared to those in the West. Westerners are the most likely to say none of the reasons would be a sin (51 percent).

Differences also exist between evangelical and mainline pastors. Evangelicals are more likely to believe a divorce based on the couple no longer loving each other is a sin — 66 percent compared to 52 percent. They are also half as likely as mainline pastors to say none of the possibilities is sinful. Only 14 percent of evangelical pastors say that versus 28 percent of mainliners.

“While most Protestant pastors view the sinfulness of divorce differently based on the reason for the divorce, this sensitivity is lost on their members,” McConnell said.

Methodology: The phone survey of Americans was conducted Sept. 19- Oct. 5, 2014. The calling utilized random digit dialing. Sixty percent of completes were among landlines and 40 percent among cell phones. Maximum quotas and slight weights were used for gender, region, age, ethnicity and education to more accurately reflect the population. The completed sample for all questions is 1,000 surveys. The sample provides 95 percent confidence that the sampling error does not exceed plus or minus 3.5 percent. Margins of error are higher in sub-groups.

The phone survey of Protestant pastors was conducted Sept. 11-18, 2014. The calling list was a stratified random sample drawn from a list of all Protestant churches. Each interview was conducted with the senior pastor, minister or priest of the church called. Responses were weighted by region to more accurately reflect the population. The completed sample is 1,000 surveys. The sample provides 95 percent confidence that the sampling error does not exceed plus or minus 3.1 percent. Margins of error are higher in sub-groups.