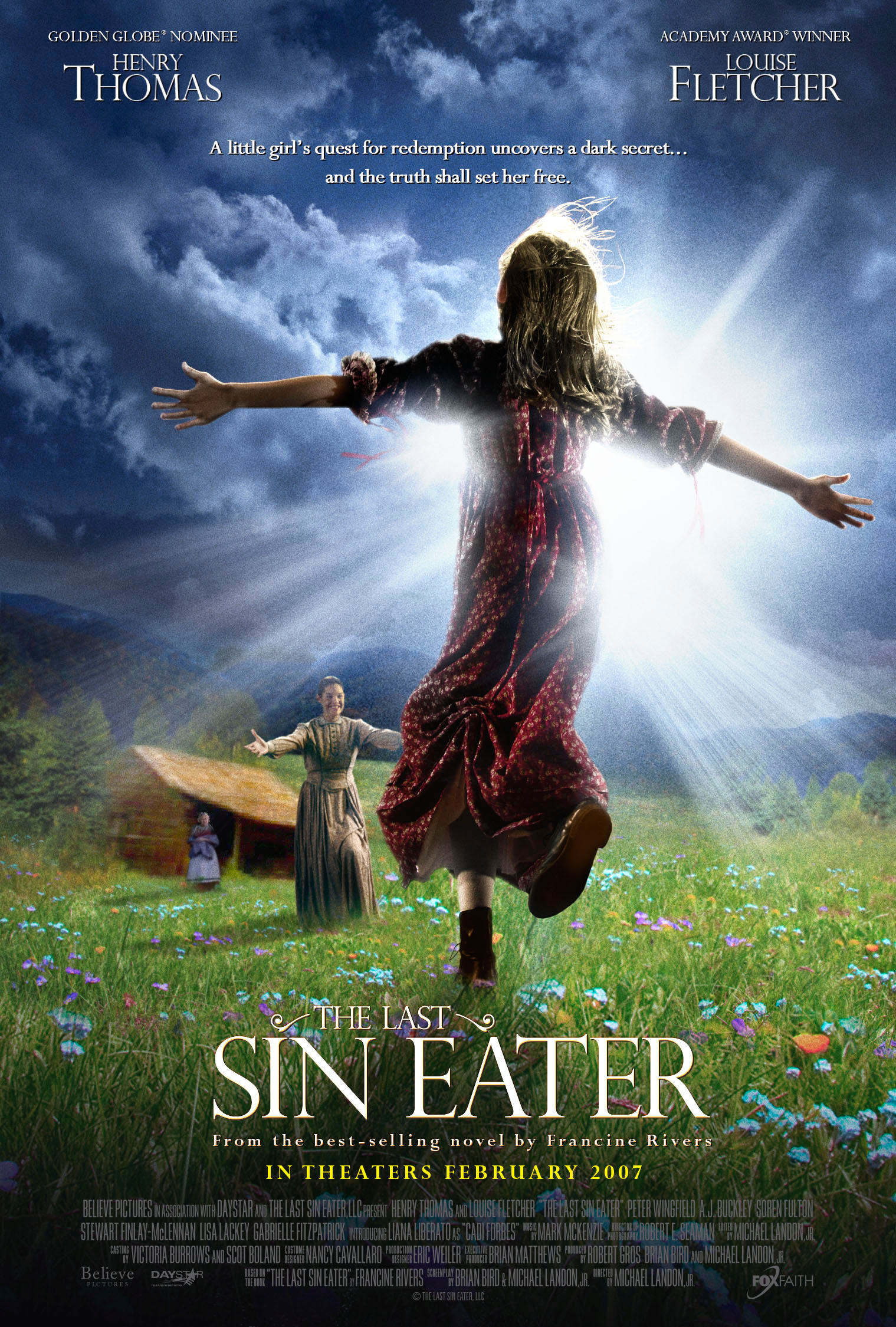 Released through Fox Faith, Twentieth Century Fox’s faith-themed branch, the film (rated PG-13 for thematic elements and some violence) is based on the Francine Rivers novel and concerns a guilt-ridden adolescent girl who seeks forgiveness by way of an ancient Welsh ritual involving a man known as “the Sin Eater.” An outcast, the Sin Eater comes to funerals and completes a ceremony by taking on the sins of the newly departed, supposedly allowing them to rest in peace. So burdened is the young girl that she sets out to find the Sin Eater. Hounded by the child, he relents and performs the ritual over her. But she feels nothing. The guilt remains. Ah, but a wandering minister introduces the youngster to the true Sin Eater.

This comes from the offspring of the man who gave us “Little House on the Prairie” and “Highway to Heaven.” Michael Landon Jr. offers a fresh story concept and delivers it with skill and competence. What’s more, it is a movie, made by movie people, wherein Jesus is proclaimed as the Son of God and our Redeemer. So, is Michael Landon Jr. a believer? You bet. I recently interviewed him over the phone.

BAPTIST PRESS: “Do you feel comfortable speaking of your religious faith?”

LANDON JR.: “Are you kidding? Any chance I get, I love talking about it. When I was 15, my parents separated. Up until that point, I never attended church, except for when my grandparents would bring me every once in a blue moon. But I didn’t think I needed God because all needs were being supplied. My father was a very loving, affectionate man. He wasn’t a Hollywood dad. He came home after work. He listened to us. He played with us. He really covered all our needs. So when the divorce took place, since I had built him up as well, everything came tumbling down.

“My life went into a downhill spiral. In the meantime, my mother, who was very broken by the divorce, was going to a manicurist who happened to be a Christian. Her name is Lois. And my mom at this point was looking for answers and meaning. So she started asking Lois about her faith. Lois would answer my mom’s questions and on top of that give her advice. My mother would apply the advice and at that point wanted to understand the wisdom that Lois conveyed.

“So one day, Lois took my mom to church and my mom gave her life to Christ. And of course, my mom wanted to share the Good News. She tried to share it with me, but I had absolutely no interest, as is true with so many teens who are not raised in church. I thought it was a bunch of hogwash. But to appease her and get her off my back I went to church with her one day. And though I couldn’t tell you what the pastor said that day, it did speak to my heart. During the next seven or eight months I would go to church, then I’d resist going. Then go. Then not go. Then go. Finally, I surrendered.”

BP: “A Christian in Hollywood always raises questions among the faithful living between the coasts.”

LANDON JR.: “Understandable. But not true. There are some great faithful Christians who live on the coasts and work in the industry. But as for me, I don’t live in Hollywood or its vicinity. My wife and I moved to Utah.”

BP: “Why Utah? Isn’t that kind of an unusual area for a filmmaker to move to?”

LANDON JR. “In a way it is. However, I filmed my last two movies here, which allowed me to go home to my wife and children every night. Utah is a great place to film with its great crew base, close proximity to L.A., various looks from deserts to mountains to city and all within a 50-mile radius. Besides, there’s a very nice Christian base here. My father-in-law is an assistant pastor in Park City where we attend.”

BP: “Both this and another recent film of yours, “Love’s Abiding Joy,” share spiritual messages. Is that something you like incorporating in your movies?”

LANDON JR.: “It is. It isn’t the only type of storytelling I’d like to do, but it is definitely something that is of great importance to me. The spiritual side of human beings is neglected for the most part by Hollywood. And while I don’t want to shove it into anyone’s face, we’re not only physical, we’re spiritual as well. And of the two. the spiritual has greater value.”

LANDON JR.: “I was a bit surprised by that, myself. The MPAA board is made up of a diverse group and they may have felt that the implied violence [in flashback we see innocent Indians being attacked, implying that they are massacred] warranted the PG-13 rating.”

BP: “Do you think that because it deals with spiritual matters or the fact that the name of Jesus is called upon has anything to do with it?”

LANDON JR.: “Well, I can’t respond, ‘cause I don’t know what’s in their hearts. They didn’t allude to that fact. As you might know, they got hammered for it when they tried doing it to ‘Facing the Giants.’ I don’t really object to the rating. Our film is intense in terms of the ideas of what’s happening more so than what is being shown. I’d rather parents not be upset with the film. This way they are warned that there is subject matter that might not be appropriate for children under the age of 13.”

BP: “With the disappointing box office that ‘The Nativity Story’ received, do you think that’s going to hinder future stories with Christian themes?”

LANDON JR.: “The box office may seem paltry, but you know, $38 million is not bad.

“However, Hollywood does need to see success in order to continue down this road. I don’t think films should necessarily be supported if they’re not worthy of that support, but we filmmakers are being given an opportunity to make movies with Christian messages, and moviegoers have been given the opportunity to support them. The entertainment industry has the hearts and minds of our children. As Andrew Fletcher said, ‘Let me write the songs of a nation and I won’t care who writes its laws.'”
–30–
“The Last Sin Eater” is rated PG-13 for thematic elements and some intense sequences of violence. The movie has no language and no sexuality. For more information, visit www.foxfaithmovies.com/thelastsineater. Phil Boatwright is the editor and film reviewer for previewonline.org