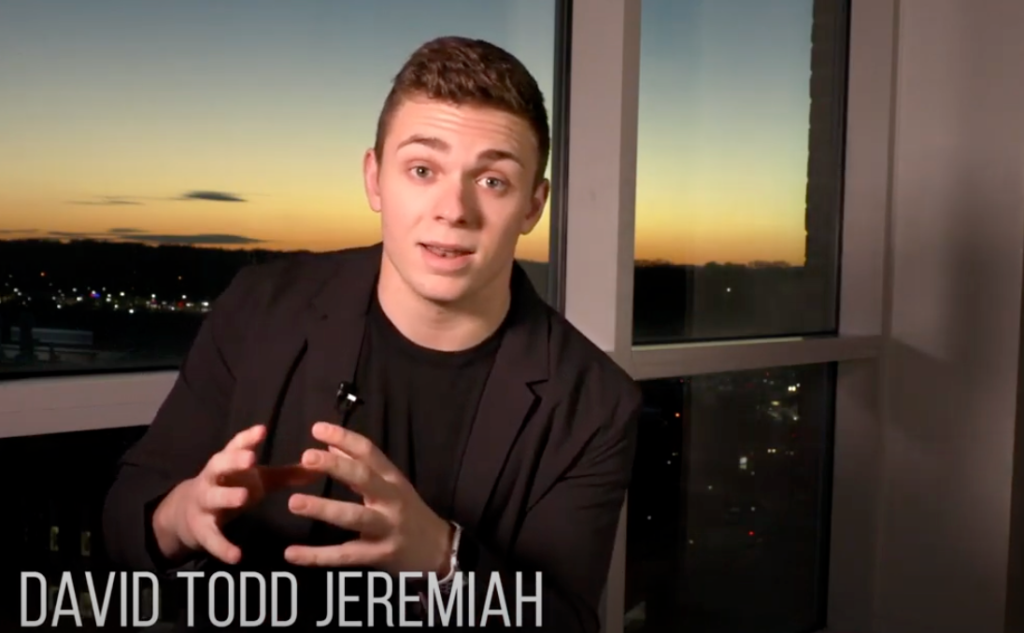 LYNCHBURG, Va. (BP) – As the grandson of a well-known minister, David Todd Jeremiah is eager to be part of carrying on his family’s ministry legacy. This is partly why he helps oversee “PassagesTV,” a video devotional series aimed at young people.

Although ministry has always been a part of his family life, Jeremiah said he views it as something he gets to do, rather than something he has to do.

“It (ministry) has kind of been something that’s been normal for my whole life,” Jeremiah said, adding that he’s very close to his famous grandfather.

“To me he’s just my grandpa,” he said. “Because of the influence that my grandpa had, I have the potential to use that to glorify God.

“Seeing what he’s done and the lives he has impacted, for me it’s like ‘Yeah I’d love to be a part of that.’ Part of his ministry legacy is that these things can continue long after he’s gone. I try to view it as an opportunity and not something I’m obligated to.”

The younger Jeremiah first began noticing a desire to minister to young people after earning his undergraduate degree from Liberty University. He began talking with the creative director at Turning Point about his desire to reach that age group.

The two agreed that a huge opportunity was available online due to the enormous amount of time young people spend on social media.

Turning Point had already made plans to develop a devotional video series for young adults, and Jeremiah agreed to take the lead for the project.

Each episode of PassagesTV, ranging in length from five to 15 minutes, features a short devotional geared toward young people as well as footage of Jeremiah and friends traveling around the country in places such as New York, Alaska and San Diego.

Jeremiah said the name Passages is supposed to refer to both the Scripture passages presented in each episode as well as the passages each person takes in the journey of life. The theme of the content is how those two should go together. Topics covered in episodes include anxiety, perspective and servant evangelism.

Although much of the content is geared to young adults, Jeremiah said the messages can apply to kids as young as middle and high school. During a time when young people are making important life decisions, he wants to help teach them how to follow God in those decisions as well as how to be a Christian in community.

He said the purpose of the series is not to replace authentic community, but to point to the importance of it.

“The internet is where people always feel connected because you can always see what people are doing and things, but it’s not genuine community,” Jeremiah said. “Our goal is to catch their eye where they already are, and be a light in that place.”

PassagesTV is aimed at Christians but is evangelistic too. The Next Steps tab on the series’ website includes a detailed explanation of the Gospel and how to become a Christian, as well as practical steps such as joining a local church and getting baptized.

“Anything that we did was essentially pointless if the Gospel wasn’t the central message,” Jeremiah said. “We didn’t want there to be any ambiguity, and we thought the easiest thing on our site to find should be the how to become a Christian section. We want people to see Christianity is completely centralized around love.”

Jeremiah is now attending seminary at Liberty, and is considering working in young adult ministry full time with Turning Point after graduation. In addition to his part-time work for Turning Point, he is also the head graduate student assistant for the evangelism department at Liberty.

David Wheeler, head professor of the department, said Jeremiah “has a unique combination of a pastoral spirit with a real heart for evangelism.”

Wheeler, a former state evangelism director for Baptist conventions in both Ohio and Indiana, often partners with the SBC of Virginia on evangelism initiatives.

He laments the fact that many of his students, who come from a variety of church and denominational backgrounds, do not know what the Great Commission is, cannot verbalize what the Gospel is and have not heard their pastors talk about evangelism.

“It (evangelism) is either assumed and then it’s not done, or it’s just not done at all,” Wheeler said. “So either way it does not get done. We’ve lost a sense of urgency for explaining the Gospel.”

The goal of Wheeler’s Evangelism 101 class is to teach students both to serve those around them “incarnationally,” but also to tell them the hope of the Gospel.

“The incarnational aspect is we’re putting feet and flesh to our faith so that we’re living it out in front of the world to open the door for a verbal conversation about the Gospel, not in place of,” Wheeler said. “It’s both/and not either/or. We serve in order to share. The Gospel becomes real to us as we share it and see if transform lives. It becomes life-giving.”

Jeremiah agreed, saying that although social media is important for churches, having an impact on people in the local church is more important.

“I would encourage local churches to find ways to love young people and show them that you care and that you’re interested in who they are.” Jeremiah said. “The best way to get somebody to listen to you is to relate with them.”